Toronto used to have a cocktail bar in an old airplane

For just under 10 years, the Trans-Canada Air Lines aircraft registration CF-CGE flew commercially across the Americas and Europe. A Lockheed Super Constellation built in Burbank, Calif., it could hold roughly 100 passengers and had a range of about 8,200 kms — roughly the distance between Toronto and Moscow.

Unfortunately, the propellor-powered Super Constellation was launched just prior to the start of the jet age. The wildly successful, jet-powered Boeing 707 and Douglas DC-8 models, released in the 1950s, were almost twice as fast and capable of covering greater distances than the Super Constellation.

The rapid shift to jets doomed CF-CGE and others like it. It was sold by TCA in 1963, just nine years after its debut.

After two years as a cargo carrier, the aircraft was stripped of its useful parts and placed in storage in 1965. The shell bounced around Quebec for several decades before getting a new paint job in 1992, according to a timeline provided by Aerial Visuals, a website that tracks the fate of aircraft airframes. 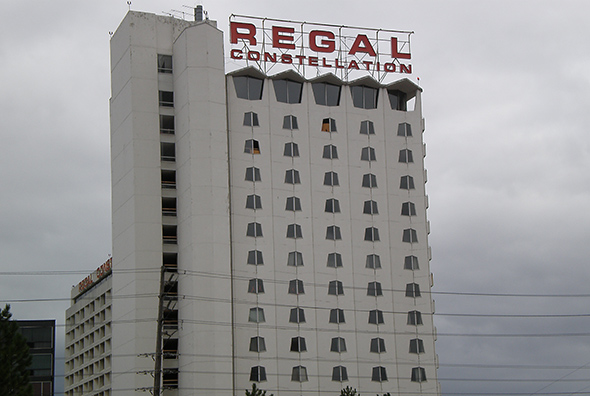 The Regal Constellation before it all came down. Photo by Dveking via the Wikimedia Commons.

In 1996, the plane, minus its engines, was shipped to the Regal Constellation Hotel on Dixon Rd. near Pearson Airport to become a cocktail lounge, of all things.

Built in 1961, the hotel was once one of Toronto's premier motor lodges. Though it was ostensibly geared towards tourists, a surprising number of its guests came from within just a few kilometres of the hotel.

"Hundreds swam and sunbathed at the motor inns close to sports and recreation areas without fighting their way north and back again in traffic," the Globe and Mail reported in 1963.

The Constellation's proximity to several golf courses and the Woodbine race track made it extremely popular, and the initial 150-room structure was expanded several times. In 1966, a 14-storey brutalist tower was added at the corner of Dixon and Carlingview.

Another 14-storey tower, completed in 1982, gave the 15-acre complex a total of 900 rooms, making it the largest convention hotel in the country. 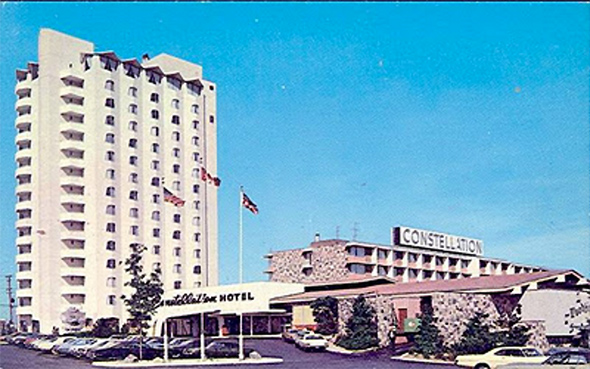 Postcard view of the Regal Constellation.

In its heyday, the Constellation housed all manner of exotic delights, including a swimming pool with islands covered in live plants, a leather-coated bar, and a dining room containing a life size tree sculpted by artist Elmo Gideon.

The decades weren't kind to the Constellation, however. Increased competition from other big-name hotels in the Pearson Airport area put a dent in revenue and the complex was sold to a Hong Kong-based company in 1981, which changed the name to Regal Constellation.

In an attempt to draw new business, the hotel bought the airframe of Trans-Canada Air Lines CF-CGE and installed it in the parking lot in Aug. 1996. The plane had been refurbished by Mississauga businessman Philip Yull and altered to serve as a kitschy tourist attraction, conference room, and cocktail lounge.

A set of wooden stairs led from the parking lot to the main entrance of the "Super Connie." Inside was a bar and a small number of seats overlooking the parking lot and Dixon Rd. 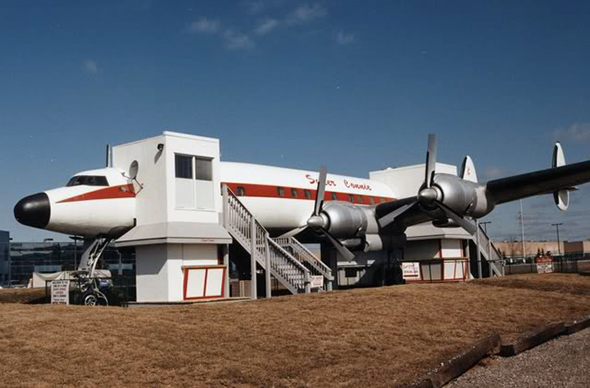 The Super Connie on Derry Road. Photo by Steve Tournay.

The novelty soon wore off and the plane became a standalone restaurant northwest of the airport on Derry Rd. The Regal Constellation closed in 2003 when the SARS crisis decimated the city's tourism industry and was torn down starting in 2009. 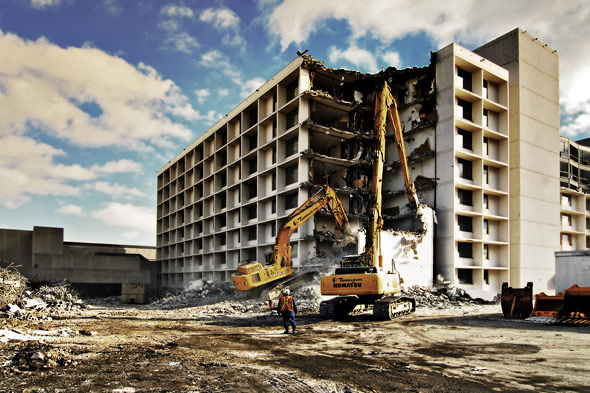 The story of the Super Constellation aircraft has a happier ending. It was purchased by the Museum of Flight in Seattle in 2005, restored in Rome, New York, and shipped to the west coast in a grey-and-red Trans-Canada Air Lines livery.

It now shares space with Concorde, Sputnik, and a former Air Force One.