A snapshot of Church and Front streets in 1975

1975 was a big year in Toronto. Along with the beginnings of a massive population surge, the skyline was in the midst of profound transformation. While the CN Tower is surely the most famous structure to be added to the city during this decade, one shouldn't underestimate the importance of First Canadian Place, which was built at the same time.

In the astonishing photo above, both appear at the same height (a trick of perspective), topped with cranes jutting out into the sky. Even as City Hall, the TD Centre, and Commerce Court had modernized Toronto's downtown architecture, to see these two icons in the midst of realization is rather remarkable.

There is more than an architectural moment captured in these images. With the Bank of Montreal as the chief tenant at First Canadian Place, one has a concrete (or marble, as the case may be) example of the exodus out of Montreal that proved a boon for Toronto in a whole variety of ways. 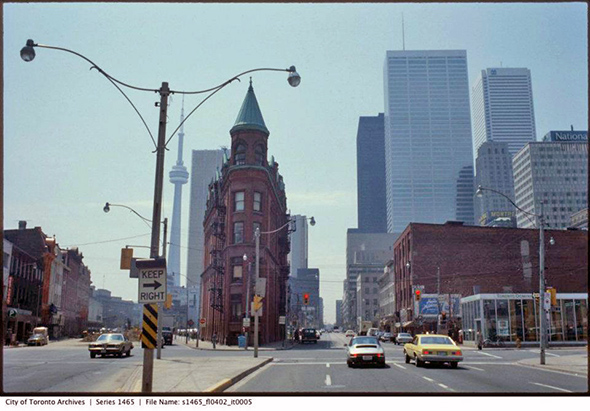 Tens of thousands anglophones left Montreal for Toronto on account of the political climate in the province, a population shift that ultimately propelled Toronto to its status as the biggest city in the country. Back in the early 1960s, Toronto was a sleepy place, with a skyline that was still dominated by the Royal York Hotel. By the time the '80s rolled around, a massive transformation had taken place.

There was an undeniable optimism that greeted the construction of these towering structures. It was a sign that Toronto was getting better, becoming more important, and cautiously entering the territory of global metropolis (a title will still seem to have ample anxiety about).

Just think about walking west on Front or Wellington towards Church St. to see the old Flatiron Building flanked by two soaring new towers that seemed to scream Toronto is the place to be.

Lead photo by srv007 on Flickr, second photo via the Toronto Archives.