If you wanted to track the profound development that Toronto has experienced since the population boom of the 1970s, you'd probably examine the transformation of the skyline over the last 40 years or check out aerial photos of the city. There is, however, a subterranean way to do this as well: just take a look at the explosion of the PATH.

Before it took the name we currently use, the PATH was known as the Underground City. It doesn't have an official opening date, but its origin point can be traced to the skyscraper boom that began in the late 1960s. When the Financial District modernized and new towers were built, they were linked with one another and an underground network blossomed.

t wasn't until 1987 that the city of Toronto took the reins for coordinating the PATH, which probably accounts for the early reputation it garnered for being impossible to navigate. Some still think that, though wayfinding signage has greatly improved over the last decade or so.

Back in the mid to late 1970s, you just had to gain your bearings via exploration and the modest signs that highlighted the entrance points to new buildings, but even back then you could walk underground from the Eaton Centre to Union Station. 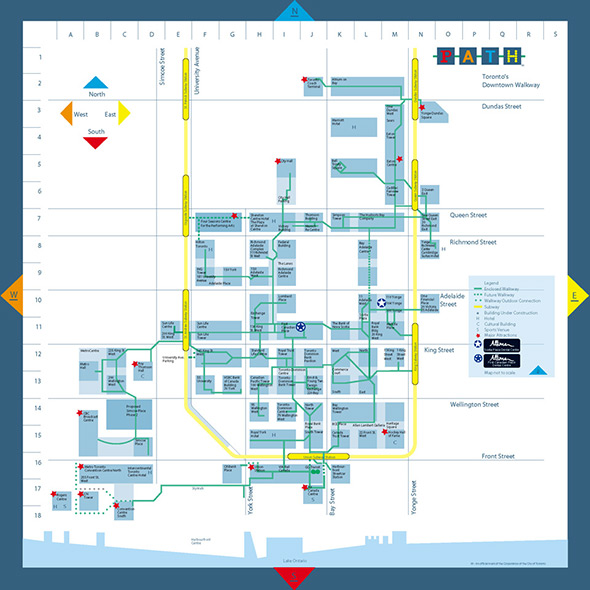 The current north and south points of the PATH are the Toronto Coach Terminal and Waterpark Place at Queens Quay, respectively. A host of interconnections have also been added, and the networks has expanded well beyond University Avenue to the southwest (though the SkyWalk isn't of course underground).

The construction of an underground city in a place with winters like Toronto was always a good idea, but it's remarkable to look back on how modest it was to begin with. There were 14 buildings linked in the system; now the directory spills over a page. While it's lifeless on weekends and late evenings, there's still a world to be explored at our feet.