The 10 weirdest houses in Toronto

All across Toronto there are residential streets lined with uniform, unremarkable homes. So when someone breaks the mould with a strange front yard or weird architecture, it tends to stand out. Some express their individuality with front yard ornaments, others through bold design.

Here my picks for the weirdest homes in Toronto.

Built in 1996 on an awkward patch of land between Eastern, Sumach, and the Adelaide DVP ramp, the cube house was inspired by the works of Dutch architect Piet Blom. The unique structure is currently for sale, which puts its future up in the air. Make sure to check it out when you can. 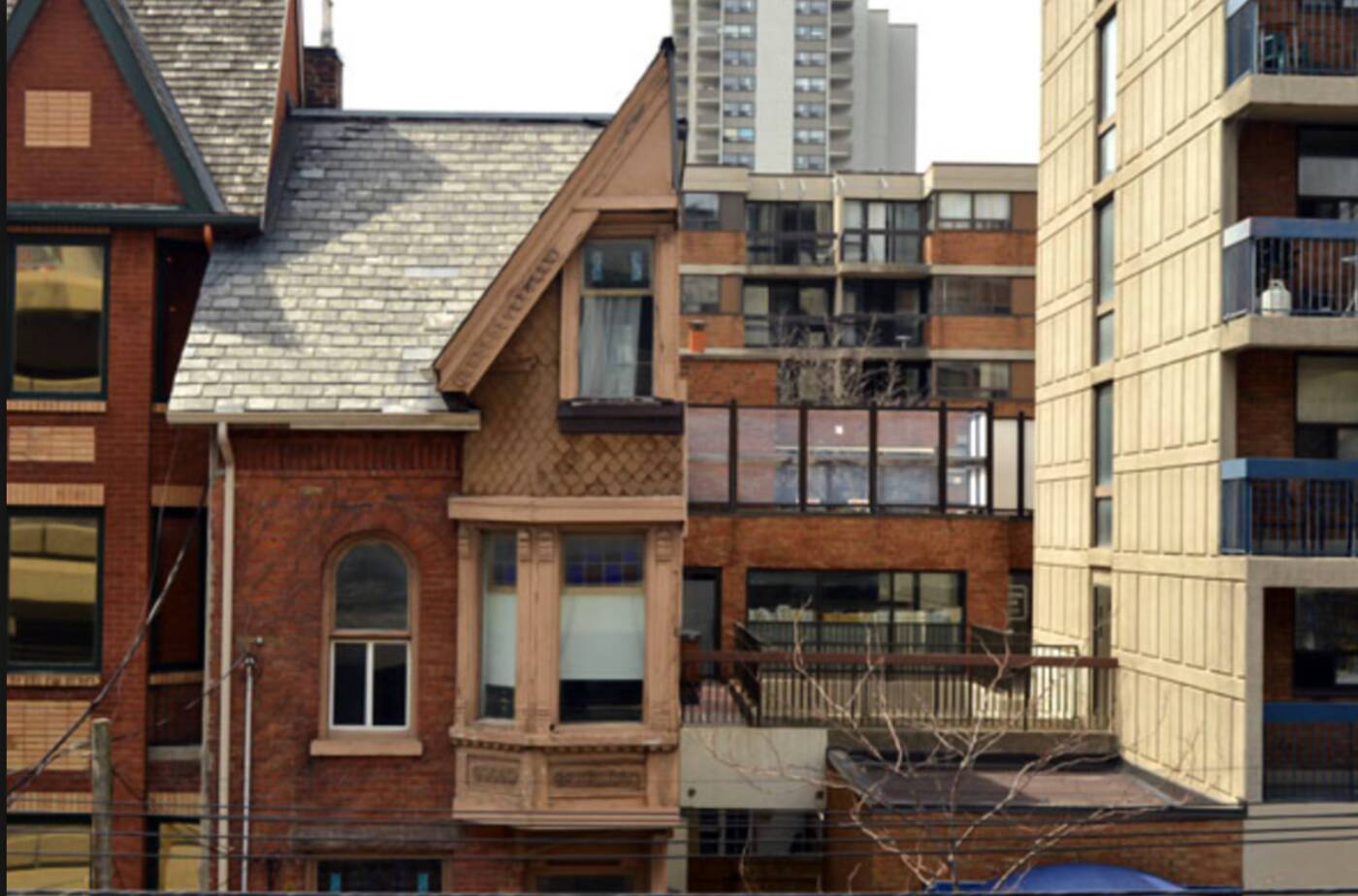 Where'd the other half of this house go? Photo by Chris Bateman.

During construction of the Village by the Grange, many of the homes that once lined the west side of St. Patrick St. were bought and demolished by developer Windlass. The owner of #54 1/2, however, was a staunch holdout. While the other properties in the six-house terrace were demolished, the middle one stayed standing. 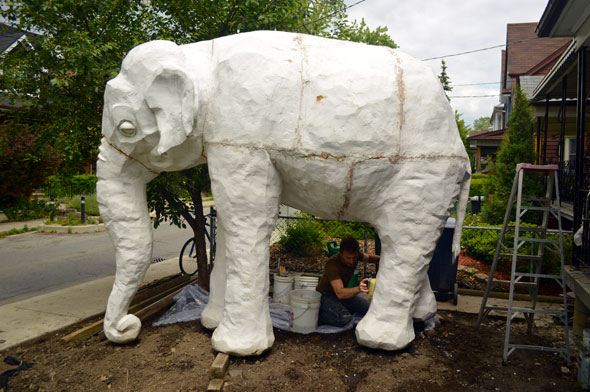 The White Elephant is a notorious local landmark. Photo by Chris Bateman.

Sally the white elephant has been in James Lawson's Yarmouth St. front yard for years. Originally part of an OCAD thesis, Lawson rescued the giant pachyderm from destruction and installed it on his property in 2003. In 2013, Lawson gave weather-worn Sally a much needed facelift. 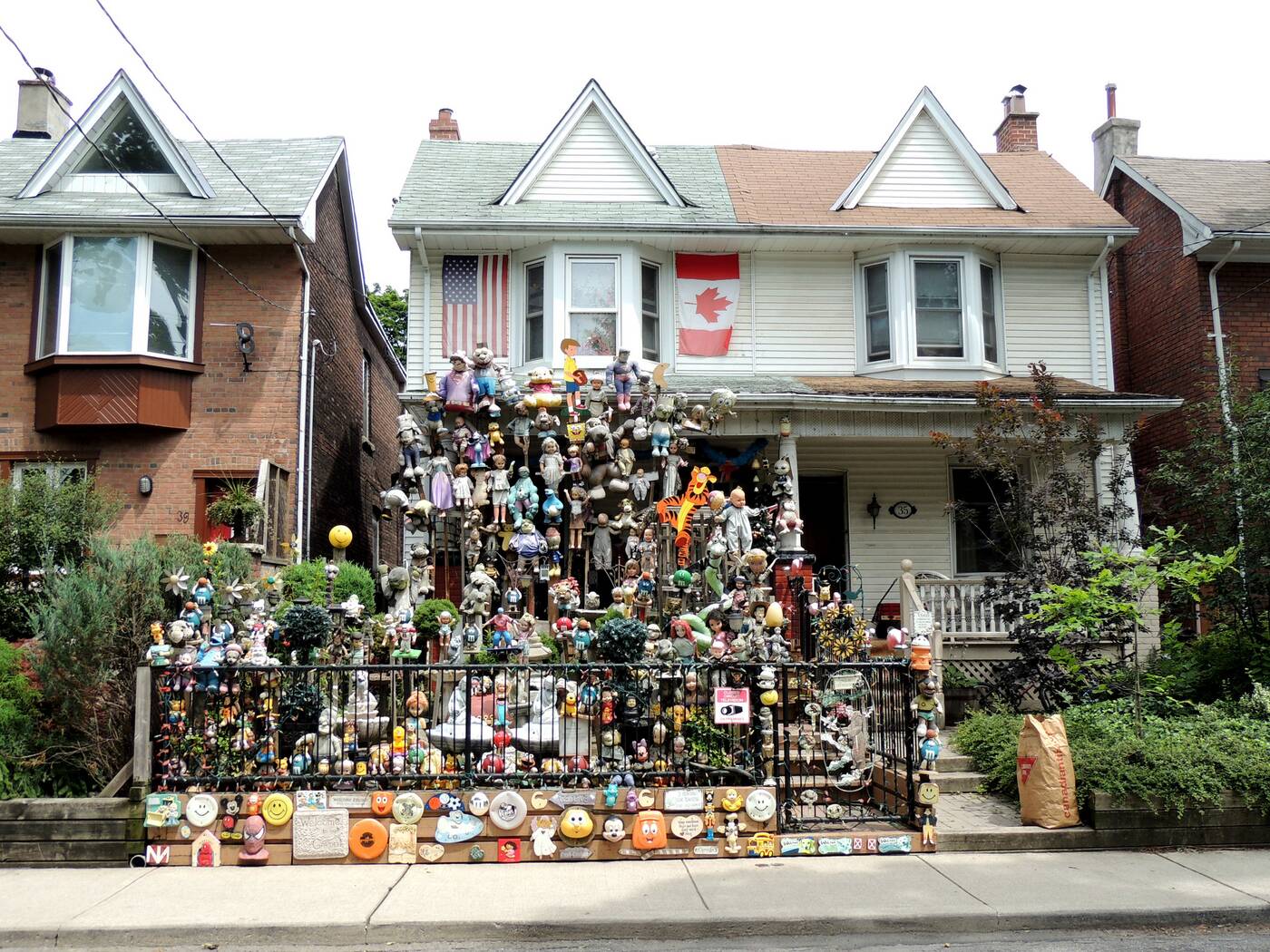 This is far and away the weirdest house in Leslieville. Photo by Greg's Southern Ontario.

Everyone in Leslieville knows about the doll house on Bertmount Ave. The unsettling front yard is crammed with figurines, dolls, and stuffed animals, all of which face the street and give passers by the distinct feeling of being watched. The collection of toys is constantly evolving, growing, and changing. 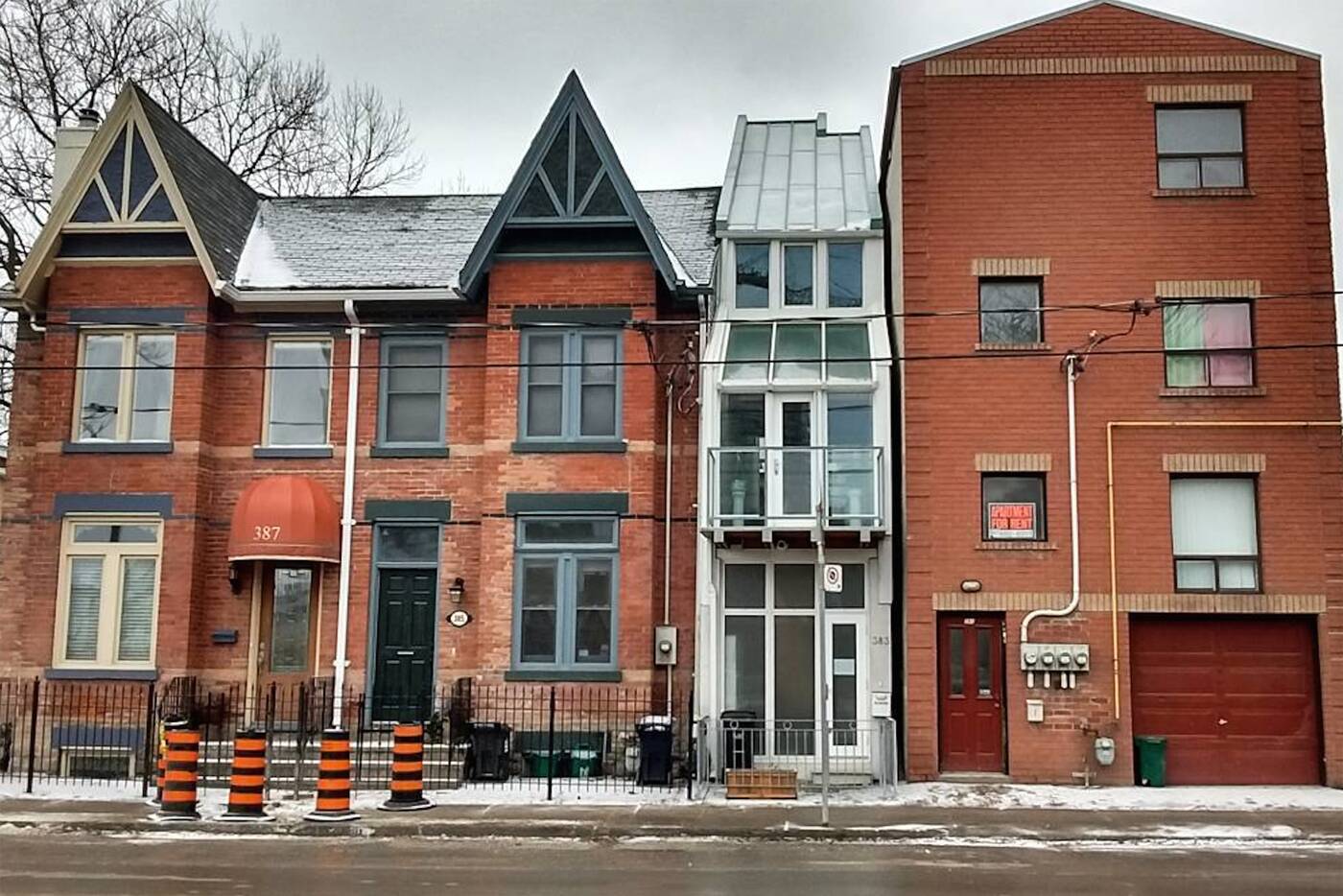 Let's just stuff a house in there. Photo by @a.wynne.

While it's not technically the narrowest house in Toronto (that title goes to another residence on this list), 383 Shuter Street is quite literally wedged in between two other buildings and certainly feels about as thin as you could possibly make a living space. 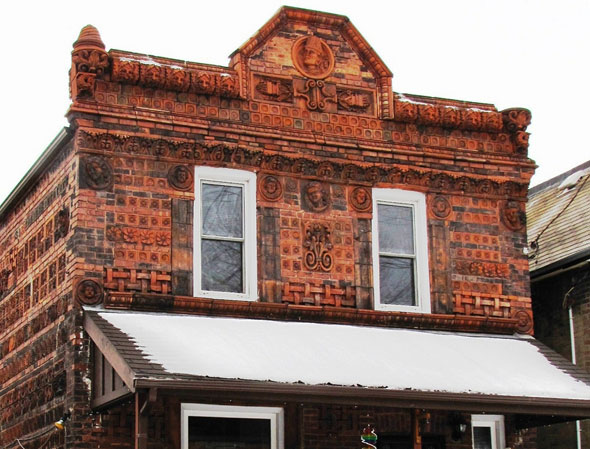 You'll do a double-take when you see the exterior of this home. Photo by Chris Bateman.

Built in 1905 by J. Turner Sr., probably in an effort to promote his construction business, this Jerome St. property is covered in oversized clay tiles, many of them intended for use on much larger buildings. Once fashionable, terracotta tile fell out of style in the 1890s, but it remains in abundance here. The house was recently listed for sale. 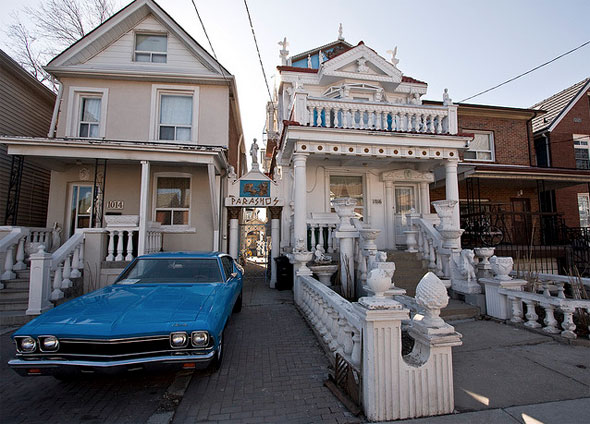 One of Toronto's kitschiest homes. Photo by Chris Bateman.

Toronto has lots of neo-classical buildings, but none as eccentric as the Parashos household on Shaw. The two-storey home is covered in Greek-inspired columns, pilasters, and other antique-looking stone sculptures. The family name is displayed proudly over the side alley in a faux Roman font and the whole thing is topped with a light-up star. 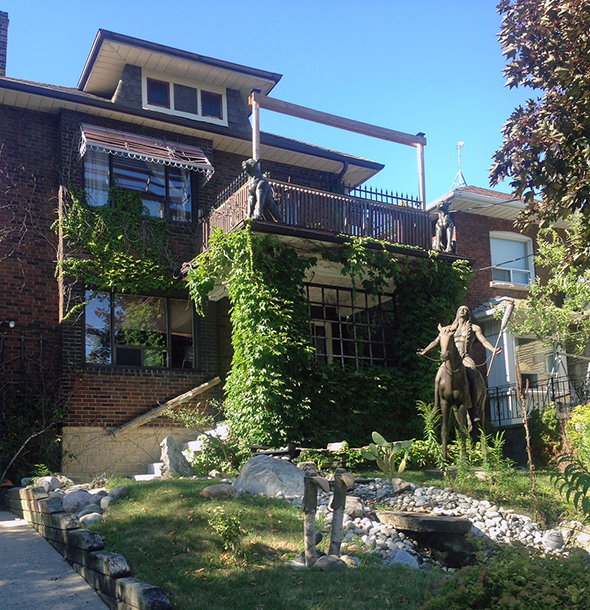 The lawn decorations at this house on Regal Rd. are like an epic anti-Western. Photo by Derek Flack.

On Regal Rd. near Dufferin and Davenport there's a bizarre home with a statue of a First Nations man on horseback in the front yard hovering over two upside down cowboy boots stuck in the ground. The little patch of land that faces the street has been turned into a rocky, desert landscape in the style of a Western scene by artist Frederic Remington. 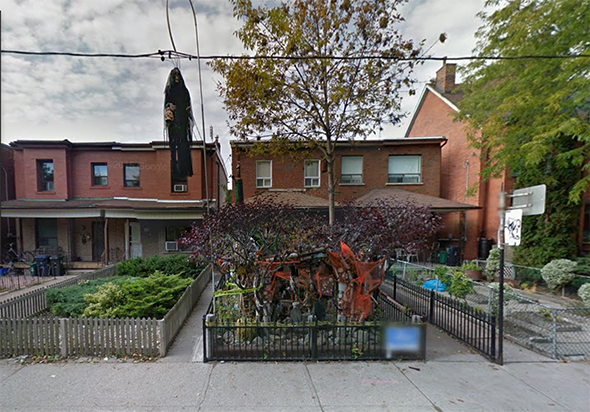 Is it junk or public art. Photo via Google Street View.

What's that in the front yard of 550 Manning? Well, according to Metro, it's a mix of wood and other materials glued together with orange insulation foam. The assemblage is the work of resident Guiseppe Rauti, who started putting material on his front lawn 18 years ago. 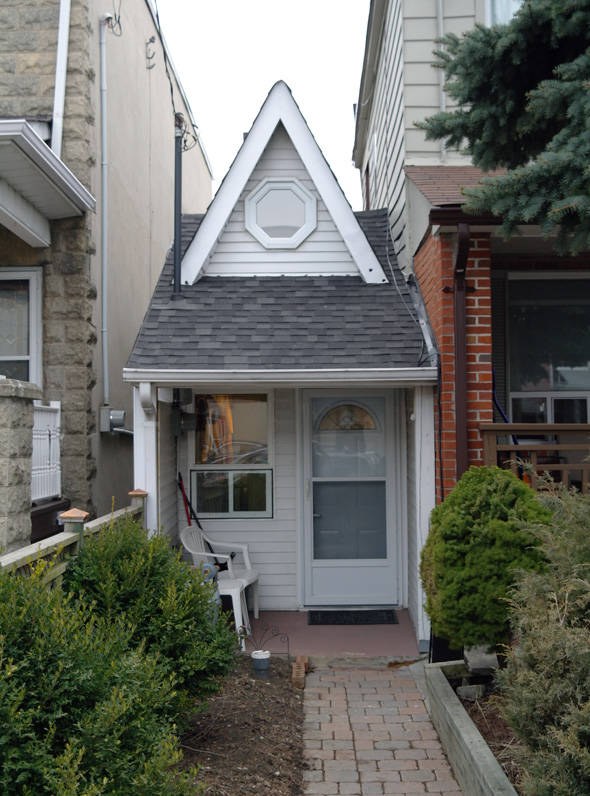 Toronto's smallest house is also one of its most famous. Photo by Derek Flack.

If there's a smaller house in Toronto, the owners of 128 Day Ave. don't know about it. At just 29 square metres, the property was squeezed into gap intended for a laneway access road in 1912. It only has three rooms: a living area, kitchen, and back bedroom with a wall bed. The tiny house is the only one on this list known to have inspired a song.