5 Toronto streets that were wiped off the map

It's not just buildings that get demolished in Toronto. Sometimes entire streets go the way of the wrecker, too.

During the days of mega block construction projects like New City Hall, the Eaton Centre, TD Centre, and First Canadian Place in the 1960s and 1970s, numerous streets were entirely swept away, most of them in the downtown core or in heavily industrial areas.

In some cases, small fragments survived. But, in most examples, streets squashed by mega construction projects vanished entirely.

Here are five Toronto streets that didn't make it to today. 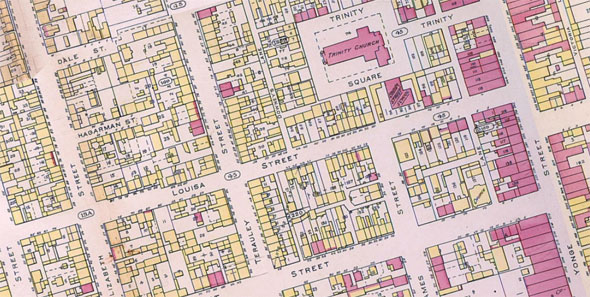 Thanks to a pair of mega projects in the 1960s and 1970s, one of the principal streets of the city's historic Ward neighbourhood is no more.

First, construction of New City Hall erased the western portion between Chestnut and Bay, then, a few years later, the Eaton Centre erased what was left between Bay and Yonge.

Located a block south of Louisa Street, Albert Street was likewise diced up by City Hall and the Eaton Centre.

Unlike its neighbour, however, one piece still remains behind Old City Hall between Bay and James streets. In its heyday, Albert ran between Chestnut and Yonge and was lined with houses.

Two other now-defunct streets intersected with Tate—Water and Overend—before it ended at the entrance to a meat packing plant. Tate, Water, and Overend all vanished after being overtaken by the Canadian National Railway sidings.

In 1880, a little under a century before its demise, Boulton Street (not to be confused with Boulton Avenue) was home to the Lyceum Theatre, a hotel, various metal foundries, and a stone cutting yard.

It ran for about 150 metres east from York between Adelaide and King to a dead end just before Yonge until the 1970s, when construction of First Canadian Place erased it entirely.

For more than a 100 years, anyone looking out the front door of St. Lawrence Hall at King and Jarvis would have seen the entrance to Francis St. About halfway along its length, Commercial Street intersected it east to west.

Both were lined with buildings and were prominent parts of the local street grid until the 1970s, when the road was taken up and the buildings demolished to create St. James Park.

The Toronto Archives. Maps from the Toronto Public Library. Written by Chris Bateman.