For more than 160 years, a bridge has crossed a deep man-made trench south of Fort York. The railway cut, carved east to west near the foot of Bathurst St., once carried track belonging to the Grand Trunk Railway to a maintenance facility on the waterfront. Later, the line served the Canada Malting silos and Loblaws warehouse, located on opposite sides of Lake Shore Blvd.

Since 1990, however, the 366-metre gouge out of the earth has lain empty--a relic of the waterfront's industrial past.

Until a few weeks ago, the only conspicuous evidence the tracks ever existed was a Gardiner Expressway-era bridge that carried Fort York road traffic over the vacant trench. As part of ongoing improvements to the historic former military site, the steel structure was recently demolished, bringing to a close more than a century and a half of history.

For the first time since 1854, there is no structure carrying traffic over the former route of the GTR railway. 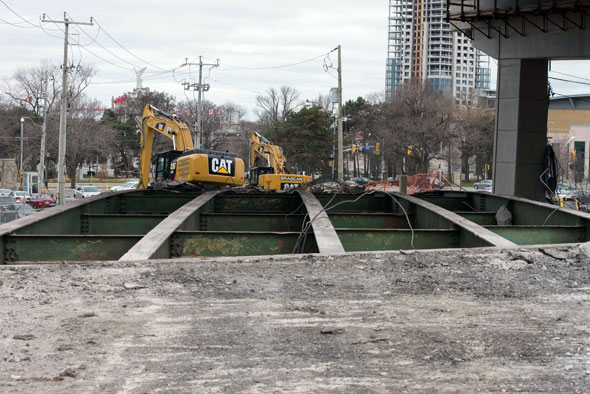 The first crossing was made entirely of wood. It was 27 metres long and could carry 8 tons on its deck, writes David Spittal in the Fife and Drum, the newsletter of the Friends of Fort York. The bridge was located near the present site of the new Fort York Visitor Centre and was for a time the only access point to the military grounds.

A second bridge that carried the streetcars of the Toronto Railway Company was added in 1916, but the original wooden structure lingered until the 1950s, when it was replaced by what would be a short-lived steel and timber arrangement.

The Gardiner Expressway was built directly over the railway trench in 1960, reaching its highest elevation as it passed Fort York. The highway had to be built unusually tall through the area in order to accommodate a new bridge that was constructed to carry Garrison Rd. over the formidable slopes of the railway corridor. 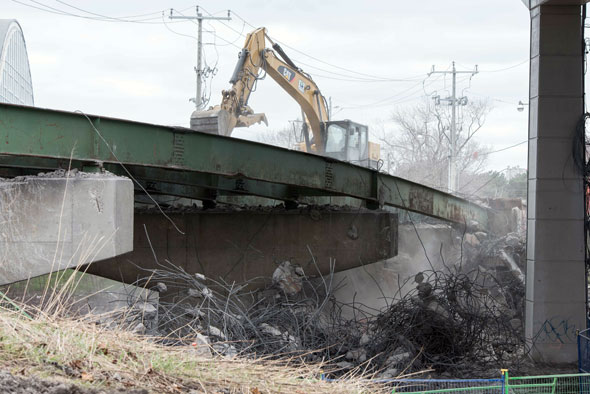 Until a few weeks ago, the Gardiner-era bridge was still in service. Now, it's in ruins--smashed into piles of concrete and rebar. For the first time in more than a century and a half, there's no bridge providing road access to Fort York.

Instead, material excavated during construction of the visitor centre will be used to fill in part of the old trench and create a permanent level crossing. As an added bonus, Fort York will acquire an additional acre of space along its southern edge.

Perhaps in the next few decades the rest of the Gardiner will come down too. 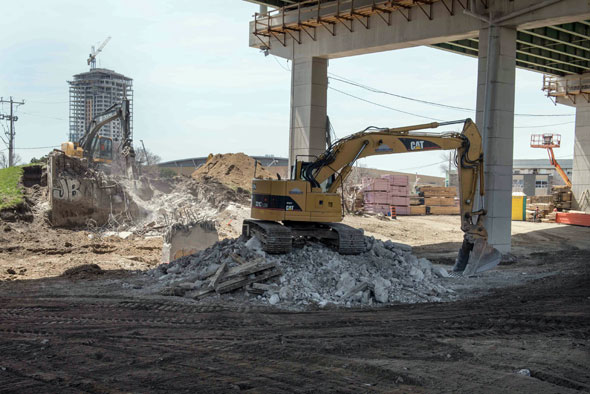