The Toronto Blue Jays were not Toronto's first professional baseball team, oh no. That honour goes to the "Torontos," later the Maple Leafs, who set up shop east of the Don River in a ball park near the southwest corner of Queen and Broadview in 1886. It was there, in just their second season, their big hitter, Ned "Cannonball" Crane, slugged the team into the history books.

It started with a meeting at the Rossin House hotel in downtown Toronto. A group of local businessmen, led by former city alderman Thomas Hunter, formed a company that would field a baseball team in the 1885 Canadian League, a competition between teams from London, Guelph, and two in Hamilton.

"If a club which can hold its own against any in Canada can be formed, and the general public begin to understand the points in baseball (which comparatively few in the city do as yet) then the attendance at the games will equal that of first class lacrosse matches," writer Louis Cauz recalls the founders remarking in his book Baseball's Back in Town.

The Torontos played their first match, a 3-2 loss to the Guelph Maple Leafs, at the Lacrosse Grounds on Jarvis St. (now the site of Barbara Hall Park) on June 5, 1885. Their first win came against the Hamilton Primroses at Dundurn Park, but lasting success was hard to come by during the team's inaugural season. The Torontos eventually finished third in the league of five teams.

Despite early mediocrity, the owners of the Torontos quickly set their sights on tougher, more lucrative competition. A plan to join the National League, the decade-old home of the New York Gothams (now San Francisco Giants,) Philadelphia Quakers (Phillies,) and Pittsburgh Alleghenys (Pirates,) was considered, but ultimately never seriously pursued. Instead, the Torontos, with teams from Syracuse, Rochester, Binghampton, Buffalo, Utica, and Oswego, founded the International League. 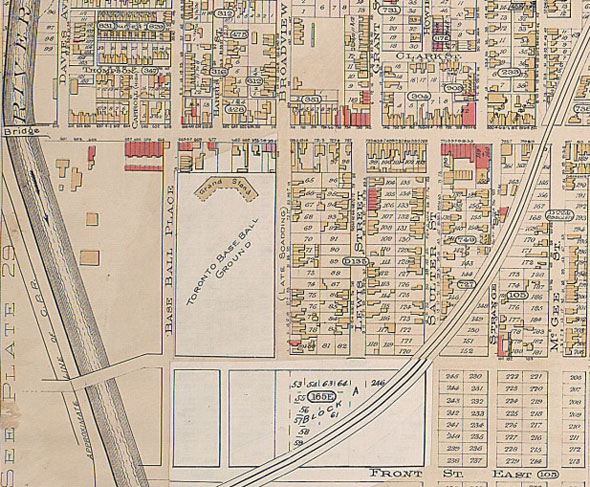 To mark their improved status, the Torontos quit the Lacrosse Grounds for a $7,000 purpose built stadium on the east bank of the Don River. In the Spring of 1886 on an eight acre field freshly cleared of trees near Queen and Broadview rose a half-hexagon covered wooden grandstand with room for 2,000 spectators. The seats were cushioned, there were generous arm rests, and a wire mesh behind home plate prevented stray balls reaching the crowd.

A second seating area with 1,000 additional seats was built along the right field boundary so that "no one needs stand, unless he prefers it," the Globe reported. A high wood fence enclosed the property, keeping out local children and obscuring views from surrounding buildings. The fence around the field of play was kept low enough for fans viewing from private carriages, however.

General admission to the Toronto Baseball Grounds was 25 cents, plus 10 cents to enter the grandstand--securing a seat cost another 10 cents.

In a bizarre interview prior to the start of the season, Torontos' player/manager John Humphries assured readers of the Globe that he would accept no bribes to throw a game, apparently unprompted. "I have been offered $600 to 'queer' a game," he said "But even if I were inclined I dare not do it."

"I am going to bring a well-behaved set of ball players to Toronto, you can depend on that."

The inaugural game at the stadium in 1886 was a sell-out. The home team took to the field in striped red and purple shirts and caps, white duck pants, and red stockings. The Globe called the uniform "bright and pretty," a drastic improvement on the previous season's "dull grey costume."

Ontario Lieutenant-Governor John Beverley Robinson threw the ceremonial first ball to the umpire before the start of the game while the Torontos' mascot, a "very small and very fat coloured boy" frolicked on the sidelines. Little Willie Hume, who traveled with the team as a good luck charm, often dressed in flamboyant uniforms, including one with thick gold trim.

The Torontos that year included Jay Fattz, the "elongated first baseman who could take them out of the clouds," and Jon Morrison, the league's leading hitter who would go on to record a .353 batting average and 107 RBIs.

The team inaugurated the new stadium with a decisive 10-3 victory over the Rochester Hop Bitters. "Every point of the game was watched, appreciated, and applauded with an understanding that was surprising considering the short time that has elapsed since baseball first became a popular sport in Toronto," wrote the Globe. The rest of the season wasn't so great, however, and the team again finished third in the standings behind Utica and Rochester. It wasn't until 1887 that things finally began to click. 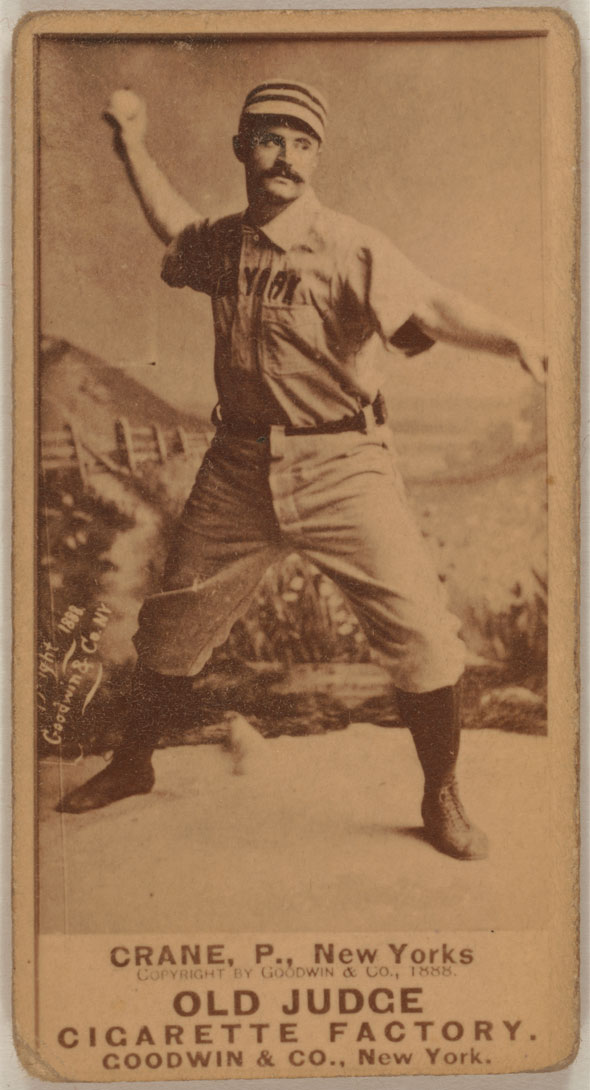 Newly-acquired slugger Ned "Cannonball" Crane (who had previously played for the National League New York Giants and would go on to play for the Cincinnati Reds) was the team's not-so-secret weapon that year. His powerful swing was effective all season and his .428 average is still a league record. He could pitch, too. Crane's trademark unpredictable drop ball frequently confounded batters.

Best of all, Cannonball's remarkable play was a vital component in the 16-game win streak that clinched the 1887 championship. There were no playoffs, so Toronto took the pennant by virtue of building an unassailable lead at the top of the standings.

The Globe, which carried florid game reports in the sports section all season, was strangely restrained about the team capturing the title. "They have played good ball all summer and have managed to keep dangerously near the front," the paper wrote following the clinching game, an 8-5 win over Scranton. "The boys deserve [the pennant] too," wrote the Peterborough Times. "A more conscientious lot of players never handled a ball."

The Torontos stayed at the Baseball Grounds until 1896 when a larger stadium was completed at Hanlan's Point on the Toronto Island. (A 19-year-old rookie Babe Ruth would hit his first pro home run there, igniting a legend, in 1914.)

With the old grandstand demolished, the field at Queen and Broadview became popular with amateur local teams. It was nicknamed Sunlight Park after the nearby Sunlight soap factory and demolished by 1913. Today, the former site is bisected by the Eastern Avenue highway ramps and mostly occupied by a Toyota dealership.

Big changes are on the horizon in the form of a massive planned redevelopment of the area.

The remnants of the old ball park are subtle. Baseball Place, a short laneway to the west of the Toyota property near, and Sunlight Park Road off Eastern Avenue are nods to the former location of the field. A silver plaque placed in 1999 on Queen Street tells the story of the team.

Heritage Toronto (which, full disclosure, employs me part time) is planning to unveil a new plaque--complete with a photo of Torontos and Ned "Cannonball" Crane--in the summer of 2016, 130 years after the team's debut.

The Torontos were later renamed the Maple Leafs (they had the name first) and played out of a waterfront stadium near the foot of Bathurst from 1926 until 1968, when the team went out of business for the last time.

It would take until 1977 for the Blue Jays to arrive on the scene. They play their home opener tomorrow.