Where to find the lost relics of the TTC

When Toronto last retired a fleet of streetcars, it sent 742 of its 744 workhorse maroon and beige Presidents' Conference Committee vehicles to a dizzying array of locations around the world. 10 went to Mexico to serve with the Transportes ElĂŠctricos de Tampico, San Francisco took 11, and Philadelphia's SEPTA transit agency bought 29 after a fire at a car barn on Woodland Avenue wiped out a third of the city's rolling stock.

By far the biggest buyer, however, was the city of Alexandria in Egypt, which took 139 of the former Toronto vehicles for use on its extensive tram network.

Those that weren't scrapped by the TTC were sold off to buyers across the U.S. and Canada: museums, heritage railways, private collectors, even restaurants snapped up the heavily-used vehicles that debuted in Toronto on Sept. 22, 1938 and were retired starting in the early 1980s.

On Eglinton East near Bermondsy Rd., La Pentola ("The Pot") restaurant offered diners the chance to eat in a used streetcar. Velvet curtains were added for romantic privacy and a Canadian flag strung from the trolley pole. The driver's controls were stripped and replaced with a cocktail bar. 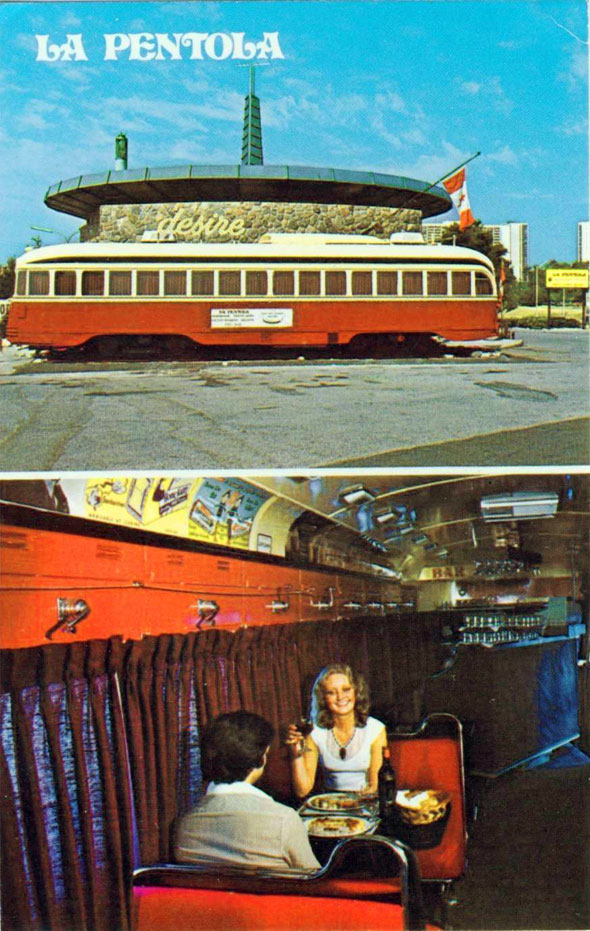 At Dundas and Bay, where the Atrium on Bay stands now, a used PCC was painted bright red and stored on rails at the edge of a surface parking lot. It housed a boutique owned by two art teachers: Wesley D'Angelo and Frieda Hafezi. They sold it in for $16,500 in 1975 and it was shipped to Thornhill, where it became offices on a corn farm and later, once again, a boutique at Rutherford Rd. and Bathurst. It has since been scrapped.

In Springville, New York, a small town about 35 kms south of Buffalo, another former Toronto Transit Commission streetcar--#4434--was renamed "A Streetcar Named Desert" (catchy, right?) and installed on a curved side street off the town's main strip. Inside and on the small wooden deck added to the exterior, staff served coffee, tea, cappuccino, and espresso before the business closed down some time after Oct. 2007.

One place where it's still possible to dine inside a streetcar is in Primrose, Ontario, where Highways 10 and 89 meet. Super Burger, which divides Mulmur and Mono in Dufferin County, has used #4314 for decades, though its days may be numbered now the owners are planning to move to a new building.

The afterlife wasn't kind to all PCCs. Some lie rusting in fields in Ohio and Pennsylvania, while others are stored on private property, stripped of their working parts or heavily damaged. Evocative though the photos might be, it's hard not to feel a twinge of sadness at the slow death of these once working machines.

On the map below, red pins mark locations where TTC PCCs were sent and later scrapped, yellow where cars ended up junked but otherwise whole. Blue pins represent sites where streetcars were stored in working condition, green where PCCs are maintained and still operate.

(Note: I've tried to verify the accuracy of each pin on the map, but in some cases it's just not possible to confirm whether or not a PCC seen in a field 10 years ago is still there. The bulk of my information came from this list and the consistently excellent Transit Toronto, which has photos of some of the old restaurant PCCs and detailed stories about the fate of Toronto's once mighty streetcar fleet.)