Cherry Street is some way from blossoming, but after more than a year of construction and extensive reconfiguration, the east end street has finally reopened to traffic between Eastern Ave. and Lake Shore Blvd.

The road has actually been complete for several weeks, but, as Global News recently reported, red tape prevented the city from opening the street to the public.

The refurbished road is unique in several ways. First, it comes with a streetcar right of way that doesn't run down the middle of the street. Instead, the tracks have been pushed over to the east side of the street and fitted with priority signals. Second, it has bike lanes; not separated, mind, but at least there are no "sharrows."

At time of writing, however, some of the crossing buttons hadn't been connected and the northbound bike lane is crossed at worrying angles by several hungry looking streetcar tracks at the intersection with King.

The sidewalks are wide and there are decorative planters and trees. When the West Don Lands, Pan Am, and other construction projects that abut the street are finished, Cherry will become an important route through the revitalized neighbourhood. 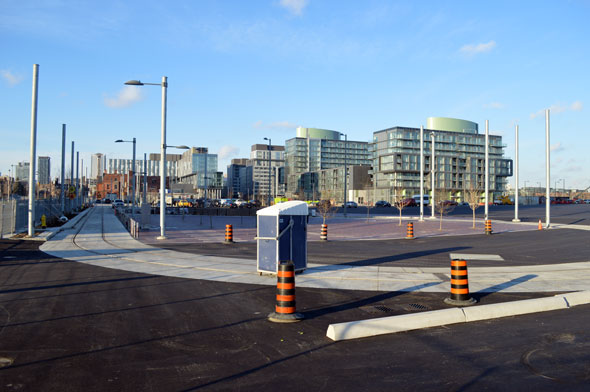 The TTC will eventually operate streetcars down Cherry to a newly constructed loop just north of the railway overpass. Spokesman Brad Ross said the spur won't be in use until after the Pan Am Games because event officials will be using the track space for event staging. Ross said the TTC hasn't yet come up with a service plan for the branch.

The Cherry Street line is expected to be extended south to connect with a planned streetcar route on Queen's Quay and service the Port Lands, though both projects currently lack funding.

What do you think of the new street?