5 things Toronto could learn from Tokyo

Tokyo is the mother of all cities. Its metro area, a conurbation that also includes the nearby cities of Yokohama and Kawasaki, is in the most populated cluster of cities on the planet, home to around 35 million people. The Tokyo Metropolis, what we might consider analogous to the GTA in terms of geographical size, houses a massive 13 million--more than twice as many people than live in and around Toronto.

Rebuilding almost entirely following the second world war--the city was subject to one of the most damaging bombing raids in history, Operation Meetinghouse, that killed more than 100,000 people and left a quarter of the city in ruins--Tokyo built an extensive subway system, radically expanded in size, and established itself as one of the most technologically advanced cities on the planet.

Here are five things Toronto could learn from Tokyo. 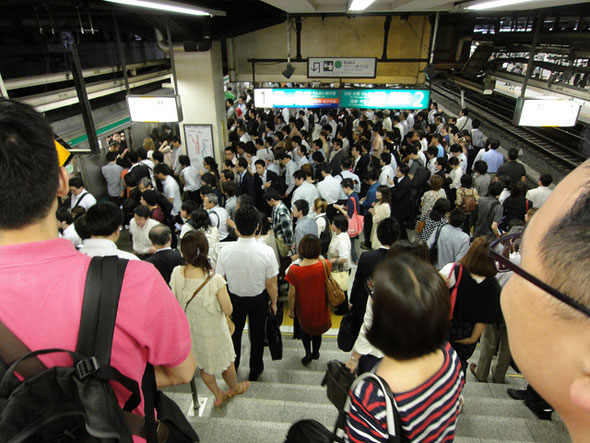 Pay fastidious attention to the workings of the subway
Tokyo's Shinjuku station is the busiest in the world. Three and a half million people--more than the entire population of Toronto--crowd its platforms every day. During morning rush hour, up to 3,000 people are packed into a typical train, a literal crush load. Such extreme numbers require meticulous organization, so the transit provider employs staff to oversee boarding (the famous "pushmen" are, thankfully, a thing of the past,) scheduling, even the flow of people.

As a result, trains almost always run on time. Delays of more than a minute are announced over the public address system, wait more than five minutes and staff will hand out "proof-of-delay" cards. As writer Taras Grescoe reports in Straphanger, researchers have even mapped the flow of riders through Shinjuku station like currents in a river, tweaking the floor layout to optimize space convenience. Such efficiency requires substantial investment, no doubt, but the reward for Tokyo has been one of the most reliable mass transit systems in the world.

Get people to and from the airport
Like Toronto, Tokyo's main airport is some distance from the central city. Narita International has something Pearson doesn't, however, and that's good transit connections. A total of nine different rail lines service Narita, including subway, commuter, and even high-speed bullet trains. The 73 kilometre express journey from central Tokyo takes about an hour and a half. The fare is about $30 Canadian, give or take a few dollars depending on the provider.

Think small
Tokyo is famous for its capsule hotels, but there are other, less claustrophobic space-saving innovations Toronto could adopt. Kasai Metro station has space for 10,000 bikes, but, thanks to a cluster of automated underground storage containers, the building isn't engulfed in a sea of unwieldy metal racks. Designed and installed by a maker of piling machines, the robotic storage devices collect, store, and return bikes based on a keycard system.

Apart from freeing up space, the storage machines keep bikes away from hacksaw-wielding crooks and the ravages of the elements. The facility is open all night and small staff provide maintenance and sell subscriptions. Best of all, 24 hours of parking costs about $1 Canadian, $18 for the month. For people who want to keep their bikes above ground, there's the bicycle tree.

Change the garbage culture
Despite its gargantuan size, Tokyo is remarkably clean. Writer Tim De Chant chalks the city's love of cleanliness up to the Shinto religion, which frowns on untidiness, but the city also has a strict (and rather complex) garbage and recycling collection system. "In Japan, some plastics are holier than others (and the holier ones go out on Mondays not Thursdays,)" writes Jacques Lhuillery for the Agence France-Presse. "Food scraps have their own bag. Cooking oil must be either absorbed with kitchen towels, or 'solidified with a coagulating agent.'"

It's easy to scoff, especially when the information card looks like this, but Tokyo reaps the rewards of its advanced recycling scheme and passionate commitment to clean public spaces. In 2011, Japan recycled 77 percent of its waste plastic, more than three times what the U.S. managed. The city even has its own masked anti-garbage superhero. 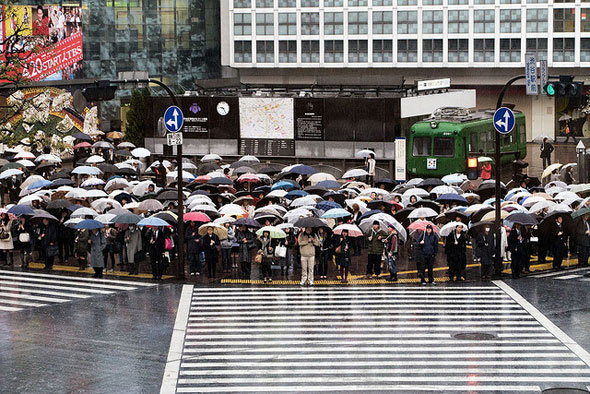 Practice good crowd control
The Shibuya pedestrian scramble is an organizational wonder. Every couple of minutes, the intersection switches from roiling mass of humanity to busy vehicular crossing and back, (mostly) without incident. About 2,500 people cross the street at the same time during peak hours "like cards shuffled in the hands of a Vegas dealer, each sliding seamlessly past the other," in the words of John M. Glionna in the Los Angeles Times.

The takeaway for Toronto should be that pedestrian infrastructure deserves to be folded into the design of our streets where it's needed. This doesn't have to take the form of mega-sized pedestrian scrambles. For example, at important transit intersections where riders transition between the subway and streetcar, like Queen and Yonge, Queen and University, King and University, and King and Yonge, the layout of the sidewalk street could be improved to ease the transition and shield those waiting from the elements, for example.