After a lengthy preservation battle, the famous spinning vinyl discs of the Sam the Record Man sign are safe. Starting soon, the neon sign that used to mark the downtown Toronto location of a mighty music store empire will be installed on top of a city owned building on the east side of Yonge-Dundas Square.

Late last month, the Inglis sign, famous for its strange messages to passing motorists such as "The greatest remedy for anger is delay" and "Destiny is not a matter of chance it is a matter of choice," was taken down, the company that built it having vanished from Liberty Village years ago.

Although they often mark businesses, Toronto seems to have a certain amount of affection for some of its more prominent (and eccentric) signs, especially when one is threatened with destruction.

Here are 5 famous Toronto signs in danger of disappearing.

Honest Ed's
The end is nigh for Toronto's world famous discount emporium. Owner David Mirvish sold the building on which his father, "Honest" Ed Mirvish, grew an empire to Vancouver-based developer Westbank Properties in 2013. What will become of the sign, which general manager Russell Lazar says is too damaged to repair, is uncertain. "It's dilapidated. It's rusting through. We're concerned about the metal on the top part which has become very thin," he told The Star last summer. It will most likely be removed when the developers move in. 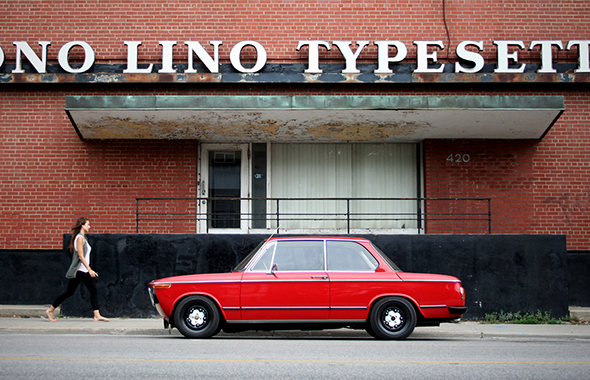 Mono Lino Typesetting
The Mono Lino Typesetting building at Dupont and Bathurst is the latest historic building to lose a famous sign. In better times, Mono Lino was a leading Toronto typesetter--a company that arranged text on a page prior to printing. In the early 1980s, the company employed 180 people, but by 1985 it was out of business and it's 70 remaining staff out of work. The end of the company, which was founded in 1912, was hastened by the departure of half of its sales staff, the Toronto Star reported.

"The work went with the people who left us," company owner Walter Adamson said. "It's a sad ending." More recently, the building was used as a backdrop in the movie Hairspray and the 1980s CBC show Street Legal. 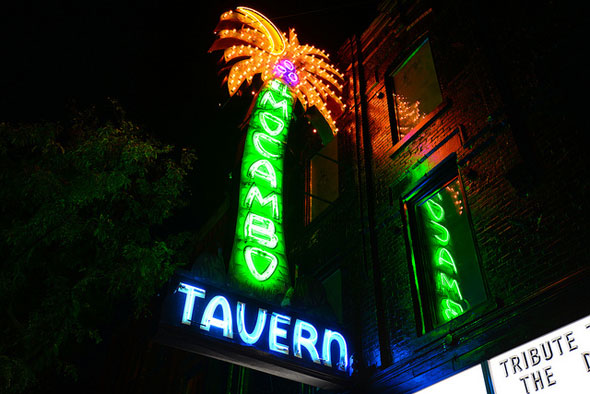 The El Mocambo
The El Mocambo, one of Toronto's most famous night spots, has been sending strange signals the last year or so. The owners closed for several months in 2013 for interior renovations. Sam Grosso, co-owner of the business, left that year only to return a few months later. In March, the building was put on the market, but no sale was finalized, leaving the fate of the historic music hall in question. The club's tropical sign was extensively renovated at a cost of $20,000 in 2012. 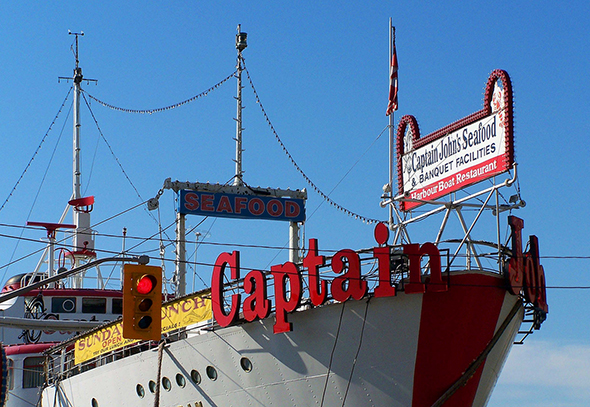 Captain John's
Captain John's is leaving the Toronto waterfront, it's just a case of when. The red neon sign attached to the prow of the M.S. Jadran once marked the location of a popular seafood joint frequented by politicians like Brian Mulroney and Mel Lastman, and sports stars like Steve Stavro, before idea of a floating restaurant went out of fashion. "Captain" John Letnik was turfed from the foot of Yonge St. for nonpayment of taxes, fees, and other charges totalling around $1 million. New owner, James Sbrolla of North American Seafood Exchange, is currently hoping to get the court ordered removal date of Aug. 22 extended. 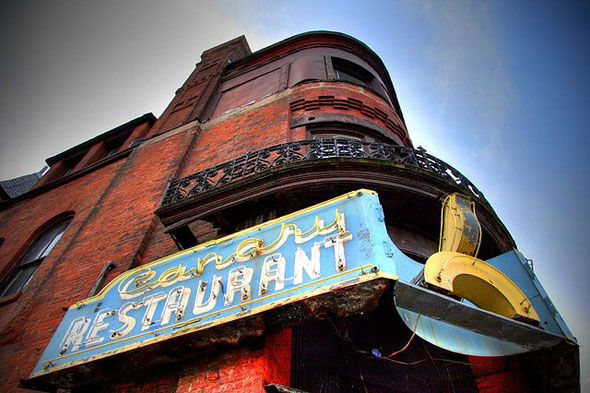 The Canary Restaurant
Ironically, the Canary Restaurant at Front and Cherry streets, named for a bird famous for its ability to drop dead at the first sign of trouble, inhabited one of the few buildings in the West Don Lands to survive redevelopment. Operated out of a former school, the Canary had a bright blue sign centred around a decorative yellow bird over the doorway. The sign was taken down prior to renovations in 2007, but renderings of the finished neighbourhood, which is named after the greasy spoon, show it back in its original location.