Torontonians can now take their pick of coffee trucks

The Toronto food truck scene is heating up in a major way this summer, with the creation of not one, but two new food truck alleys, and a slew of new trucks hitting the road. Thanks to some new coffee food trucks, it's about to get a major caffeine jolt, too.

Steel Cut Coffee rolled onto Toronto's streets this May, with Macchina following closely on its heels. It's an exponential rise in the number of coffee-slinging trucks: Until recently, the lone player was Detour Coffee, who also operate a roastery and a cafe in Dundas, Ont. (Last year, Junction Triangle cafe Hula Girl was also flogging their wares out of a truck of their own but it was shut down and re-branded.)

Macchina, the newest kid on the block, packs a lever-arm Astoria espresso machine into a traditional Italian truck - a tiny, three-wheeled Piaggio Ape. When owner Jeff Douglas (also of the CBC's As It Happens) and his wife Ana Maria Diez stumbled upon the truck, he says, "it didn't become so much as a food truck as a portable espresso bar."

The espresso in question: a custom blend created by Spitfire Coffee Roasters (behind the team that runs Cherry Bomb on Roncesvalles). They've also agreed to partner up with Cookie Martinez to serve some baked goods. 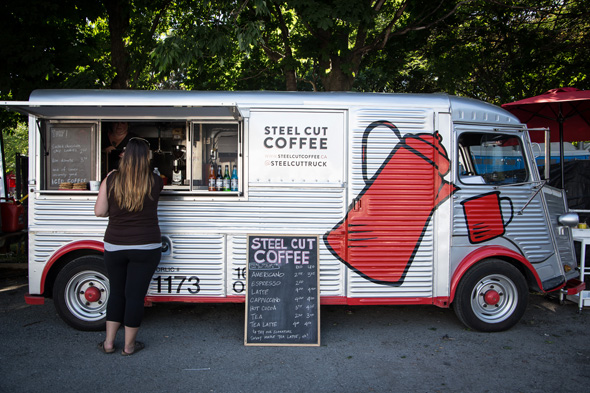 Steel Cut is similarly European on the outside (they're set into a refurbished Citroen van), but set themselves apart by offering hearty breakfasts like steel-cut oatmeal (with your choice of fruit and nut toppings) and homemade baked goods, including loaves, squares and cookies. They're also getting rave reviews for their espresso, courtesy of Pig Iron.

Detour, who often show up at different markets, festivals and other events around southwestern Ontario, can still be seen in Toronto on occasion in their little yellow '60s trailer, dishing out espresso drinks, cookies, and a few seasonal specials/oddities, like coffee soda.

That motley assortment of vehicles gives Toronto's coffee trucks the novelty they need to break folks away from their tried-and-true brews. (People are creatures of habit; coffee drinkers, doubly so.)

"The Ape is very popular - I think the curb appeal, when people see it, it makes them feel good. It makes them happy. It looks like a clown car or a toy, you know?" The downside: The city still requires coffee food trucks to include all the necessary gear that a full-service food truck handling raw ingredients would need, meaning Douglas had to shoehorn it all - including four sinks - onto the Ape's 25 square feet of space.

You'll find the coffee trucks at festivals and food truck-friendly events, and they're a popular draw for businesses or private events looking to treat their employees or guests to coffee. But given Toronto's strong cafe scene, and the relative newness of the coffee truck as an idea in Toronto, Steel Cut's Janet Chant says location is crucial.

"We've certainly learned a lot about choosing our destinations wisely, in terms of fairs and festivals and that sort of thing. The demographics do make a big, big difference." The Steel Cut customer, she adds, is generally 25 to 45, has had some exposure to the downtown coffee scene, and knows what a good cup of espresso can offer over your standard Tim Hortons drip.

Interestingly, Chant says, Steel Cut wants to become a neighbourhood cafe in its own right by finding an area not served by its own coffee shop, and staking out a spot there every day. "We want to be the go-to for a certain population for breakfast and coffee, which means we've got to be in the same spot every day. Basically, break people's habits of going to the Tim Hortons or the Starbucks." 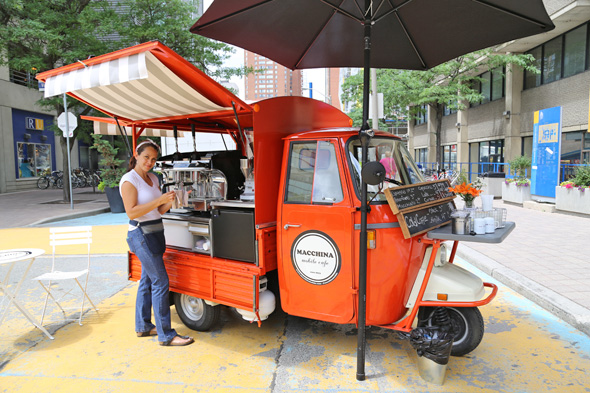 Macchina, however, is content to go where the wind takes them. "The great thing about having a portable business is you get the chance to interface with a lot of different people in a lot of different neighbourhoods," Douglas says. "And that, for us, has been really rewarding already."