How the mayor of Toronto got an 800-pound desk

When Rob Ford and several other members of city council worked themselves into a lather last year over the cost of replacing several designer chairs at City Hall, they didn't realize they were adding another chapter to an epic and fraught furniture debate that started 50 years ago.

In case you don't remember, in 2013, the city revealed it had paid $75,000 to buy replicas of the original William Platner-designed members' lounge table and chairs instead of fixing up the ones it already owned.

The expertly crafted decor, installed decades earlier by design firm Knoll International and protected by a heritage agreement, was heavily worn and in dire need of refurbishment. Rob Ford was angry at the expense, but others, including councillor Adam Vaughan, were concerned that the city had bought "cheap knock-offs."

The rest of the Knoll furniture, desks, chairs, and credenzas, much of it still in use at City Hall, wasn't without controversy when it was new, either. 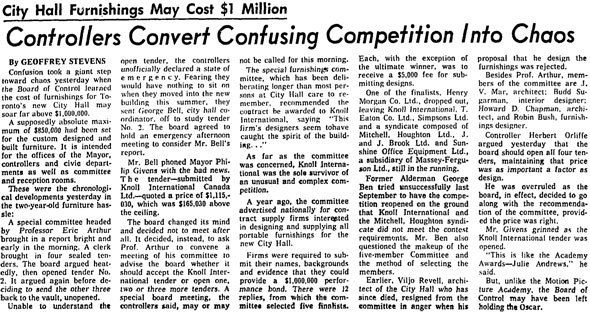 Finnish architect Viljo Revell might have won the competition to design Toronto's new city hall, but the battle over who would furnish the building was still raging even as the curved towers were approaching completion in Summer 1965.

In truly bizarre, only-in-Toronto fashion, four of the companies submitted design proposals, but only one was ever opened. "A clerk brought in four sealed tenders," Geoffrey Stevens reported for the Globe and Mail. "The board argued heatedly, then opened tender No. 2. It argued again before deciding to send the other three back to the vault, unopened. Unable to understand the open tender, the controllers unofficially declared a state of emergency."

It turned out, after some probing, that the tender the group had chosen, apparently at random, belonged to Knoll International - it was projected to cost $1.1 million.

A year earlier, when the rules of the competition were laid out, there was an attempt to disqualify Knoll and another company because they hadn't met the city's budget requirements.

Amid the chaos, Viljo Revell had furiously resigned from the committee after being told he couldn't design the furniture himself. He died a few months later without ever seeing his building completed. According to Marsha Kelmans in Concrete Toronto: A Guidebook to Concrete Architecture from the Fifties to the Seventies, the blow was the "biggest disappointment of his life." 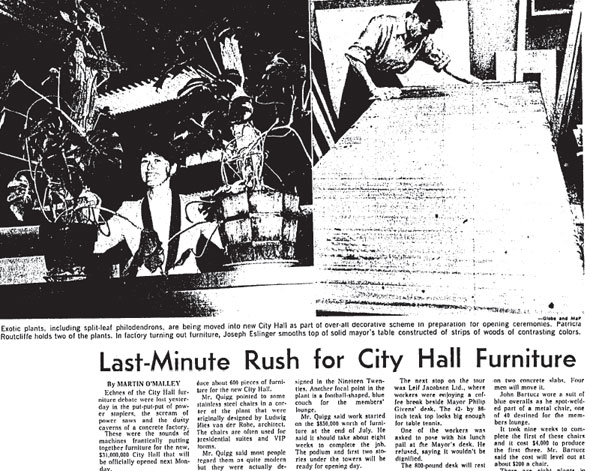 Although Knoll asked $165,000 more than the budget, it's worth noting that Eaton's also broke the rules by offering to kit out the building for just over a $1 million. Simpson's and another bidder, Mitchell Houghton, managed to produce a proposal that stayed within budget, but before the final council vote on the matter, Knoll agreed to knock $40,000 off the price to the apparent approval of several aldermen.

In the meantime, the Board of Control - a precursor to today's Executive Committee - voted under mayor Phillip Givens to reject the Knoll proposal due to its high price tag. Only then, finally, was Knoll persuaded to fall under the $850,000 ceiling. Council voted 11-9 in favour of accepting the American company's bid.

But still the wrangling continued. In the 1960s, the Board of Control was the only group able to officially award a contract, so the matter was recycled again. This time, the board voted for Simpson's, pending the final approval of council which, of course, voted 16-6 for Knoll again, settling the matter at last.

By this point the process had taken so long that when the new building opened three months later, in Sept. 1965, the offices above the second floor were filled with used furniture from Old City Hall. 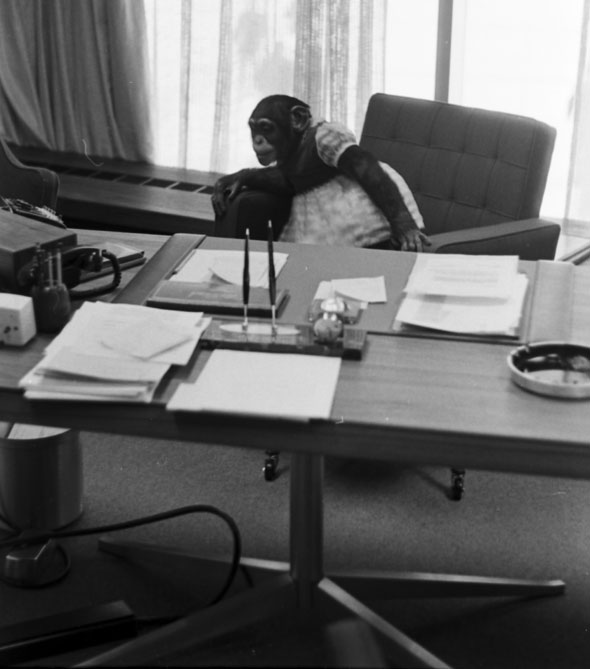 For it's money, the city got 600 pieces of furniture, including stainless steel chairs designed by Mies van der Rohe, the architect behind the black towers of TD Centre, a blue football shaped couch for the members' lounge, and numerous coffee tables, waste paper baskets, and desks.

The mayor's desk, the work of Leif Jacobsen Ltd., was made of teak and cast concrete. The 1.1 by 2-metre top looked "big enough for table tennis," according to reporter Martin O'Malley in the Globe and Mail, who toured the factory during the assembly process.

The cast concrete legs were poured into glass-fibre moulds, rolled through an oven on a trolley, then sandpapered smooth. "Everyone worried that the concrete would look big an ungainly," said John Quigg, the general manager of Knoll. "It looks more like granite."

All the soft furnishings for the east tower, which collected the majority of afternoon sun, were upholstered in cool blues and greens. The west tower got warm shades of yellow, gold, and orange, because it spent most of the day in the shade. 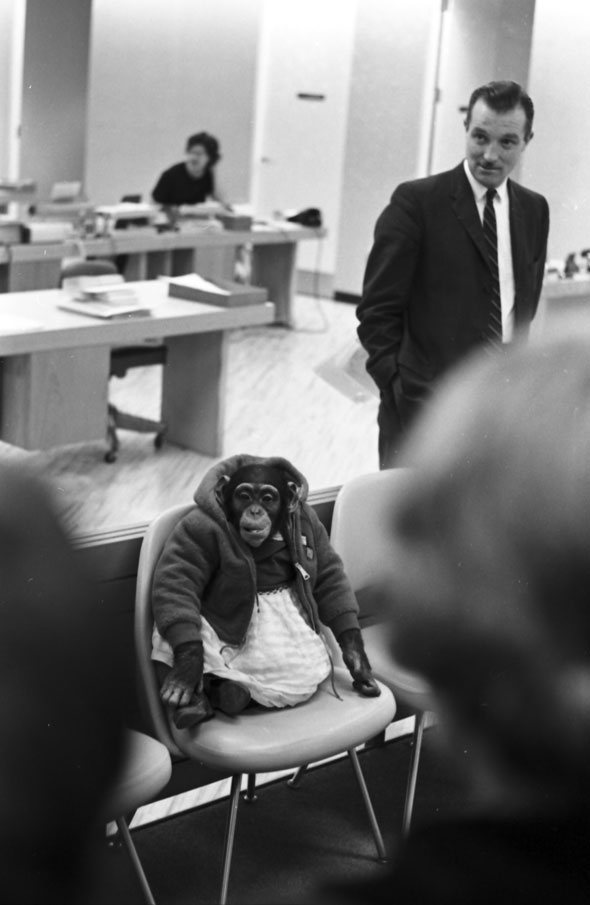 Even after it was delivered the furniture continued to be a magnet for controversy. Typists complained wobbly "go-go" desks moved with each toss of the typewriter cartridge and bemoaned the lack of "modesty panels," which would have shielded legs in short skirts from view. Aldermen spoke out about a lack of storage space and many ordered credenzas and cupboards. Some even opted to keep their old office furniture.

The first civic leader to sit at the monstrous mayor's desk was Philip Givens, who was in office when new City Hall opened. Since then, ten more have spread papers out on its massive surface, including David Crombie, John Sewell, Art Eggleton, June Rowlands, Mel Lastman, and David Miller.

It's still there now, according to the city, beneath Rob Ford's family photos, next to a giant white oriental vase (according to police documents, an aide to the mayor found a joint stashed in one of the Knoll credenzas.)

Happily, more original furniture survives in many of the city councillor's offices, waiting to stir up more controversy when it eventually needs replacing.

(Note: The only archival images I could find of the original furniture in use also feature a chimpanzee named Heidi. The animal was given a tour of City Hall for reasons that aren't entirely clear. Just go with it, OK.)