Can these condos jumpstart Parliament and Adelaide?

The intersection of Parliament and Adelaide streets could be in for a major shake-up with the addition of two proposed new condo buildings. The similarly sized developments, planned for the northeast and northwest corners, which are currently home to a disused office building, a seldom used surface parking lot, and row of Victorian homes, could inject much-needed new life to the forlorn stretch of Parliament between Queen and King.

The proposals come at a time when large swaths of the King-Parliament neighbourhood are seeing similar changes. The new Globe and Mail headquarters is currently under construction at King and Berkeley, Brad Lamb just completed a mixed-use building at 273 King, and a new data centre is currently rising from the ground at Parliament and Mill streets. And that's not to mention the ongoing Regent Park redevelopment. 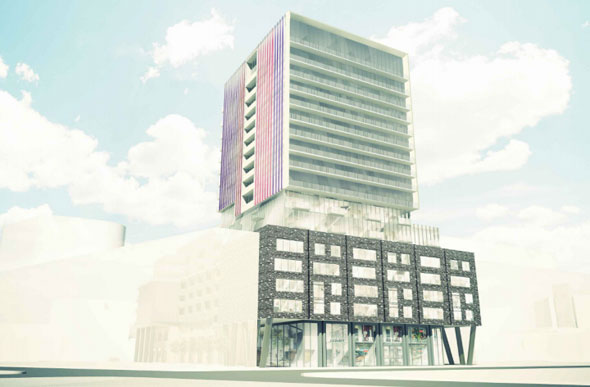 The building proposed for the northwest corner of Parliament and Adelaide would see a six-storey retail podium added to Parliament at the expense of four century-old homes, some of which have been converted to offices. Above, condo units would look out on to the street from behind a grey textured exterior with irregular windows.

On the Berkeley side of the plot, a 108-year-old brick stable building, which is currently being uses as offices, will form part of the support for the main tower. The almost perfectly cuboid block with its purple trim looks a little like the moveable headquarters of the World Aquanaut Security Patrol in Jerry Anderson's Stingray.

The city's heritage team might be worried by the "partial preservation" the developers envision for the protected building at its base, however. The red brick Christie, Brown & Co. Stables, which was built in 1906 to serve the nearby Christie, Brown and Co. factory ("Christie" refers to Mr. Christie the baker,) was listed as a heritage property earlier this year. 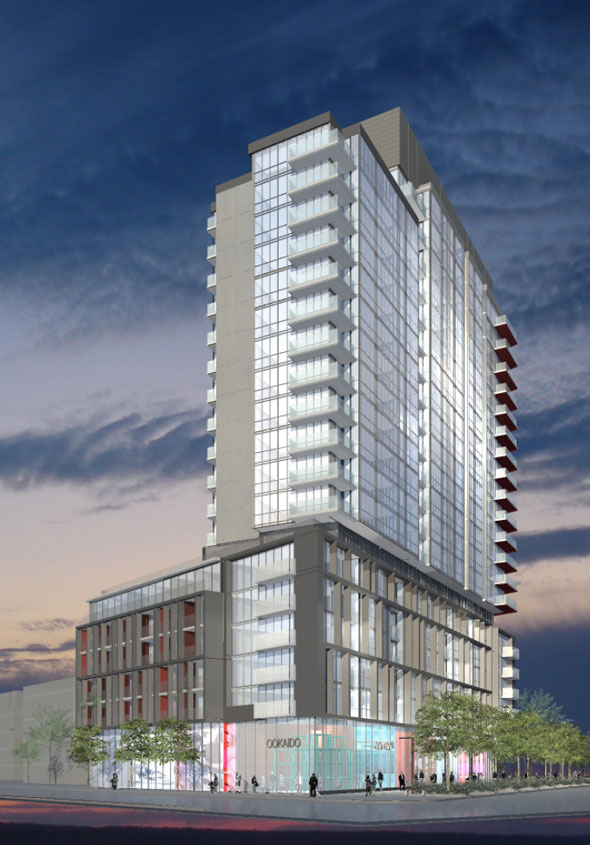 Directly opposite, on the other side of Parliament, Great Gulf is proposing a development of similar bulk that would wrap around the corners of Parliament, Adelaide, and Power streets. The former offices of Sing Tao Daily, which face Orphan's Green, would be demolished and the parking lot turned into retail and commercial space.

A 23 storey tower, containing a mix of condo and rental units, would be built flush with the Power Street facade. The developers are promising the owners of each of the residential properties access to a balcony or rooftop green space.

This area was mainly residential before the Adelaide and Richmond street on-ramps punched beyond Parliament in the 1960s. The winding sweep of the new access roads diced up Corktown, severing local north-south streets. The speeding traffic that came pouring off the highway made the block undesirable in the decades that followed.

In recent years, the stretch of Parliament between King and Queen has become a traffic-heavy waste that includes a Shell gas station, a Hertz equipment rental, and two car dealerships. Even the local Coffee Time, located in a bunker-like building on the northwest corner of Richmond, couldn't survive -- it closed a few weeks ago, and now sits vacant.

There's no doubt this stretch is in dire need of fresh residential development, but do you think these buildings would be a good fit for the neighbourhood? 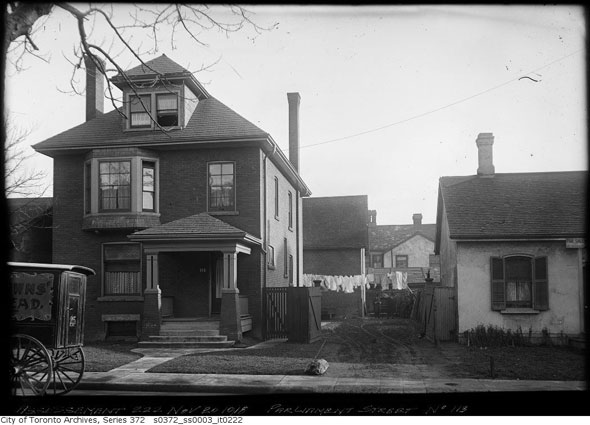