St. James Town and the messy politics of urban renewal

When it was first proposed in the 1960s, St. James Town was the biggest urban renewal project ever conceived in Toronto. By clearing a vast swath of crumbling Victorian properties in one of the city's poorest neighbourhoods, urban planners aimed to engineer the densest concentration of people in the country. The only people standing in the way were the owners of a handful of holdout homes who refused to budge.

Lucio Casaccio, a taylor, and Francis Berghofer, and 68-year-old grandmother, both fought to keep their homes against the St. James Town developer with varying levels of success. The remnants of their battles are still visible today, if you know where to look. 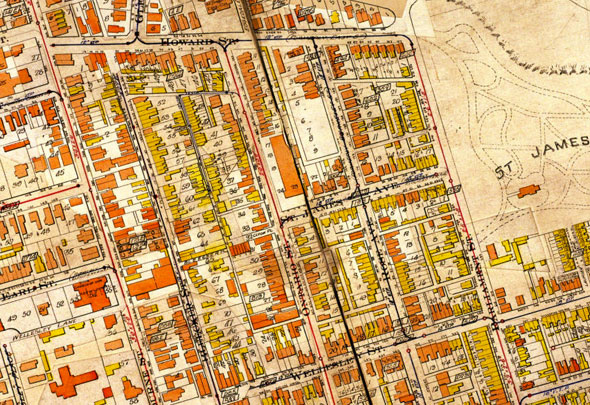 In the 1950s, many of the Victorian homes of north Cabbagetown were seriously grim. Many of the rental properties were owned by unscrupulous landlords and lacked even the most basic utilities.

One St. James Avenue mother told the city how she was forced to keep a light on above her two-month-old baby's crib to ward off rats and mice. Five families - 11 children and 10 adults - shared her building and its single bathroom. In a letter, she complained of roaches, faulty wiring, broken plumbing, and a lack of heat in winter. And she wasn't alone.

Inspections by health and building inspectors uncovered horrific conditions. Ceilings were collapsing, rotten floor boards created pits into filthy basements, and light fixtures hung off walls. "People shouldn't be living here," alderman June Marks told a tenant during a visit that was covered by the Toronto Star. The woman's pet cat had a freshly killed rat in its mouth. It waited, she said, by a hole in the wall for a new rodent to emerge every day. 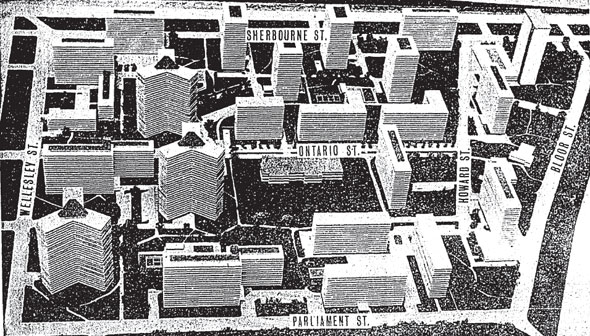 Landlords were often to blame for the gross unsanitary conditions. Joseph Shori, the owner of some 24 properties in the area, said he rented one his St. James Town homes for $89 a month to a total of 23 tenants. He blamed people who were behind on rent for leaving the buildings in a not "ideal condition." (He would later threaten to cut off the heat, light and power to his properties when his tenants complained to the city's Board of Control.)

At the time, the city still routinely referred homeless welfare families to the neighbourhood. Inspectors were supposed to ensure the buildings were fit for habitation but, as the Star reported, the official advice was to lock doors to dangerous rooms and, in one case, avoid standing or sleeping underneath a semi-collapsed ceiling.

Leo Apter, a property manager for a company that rented some 200 homes in downtown Toronto, said it wasn't worth fixing homes that might be razed in a few years. "The rent is so cheap the company would lose money if it had to make repairs," he said. In the end, the city agreed to take over many of the worst homes ahead of demolition.

The first phase of the St. James Town redevelopment, which razed the block between Ontario and Parliament streets, was given the go-ahead in 1965. An early version of the project called for the removal of all the original homes between Wellesley and Bloor, including those north of Howard Street (more on that in a moment.) 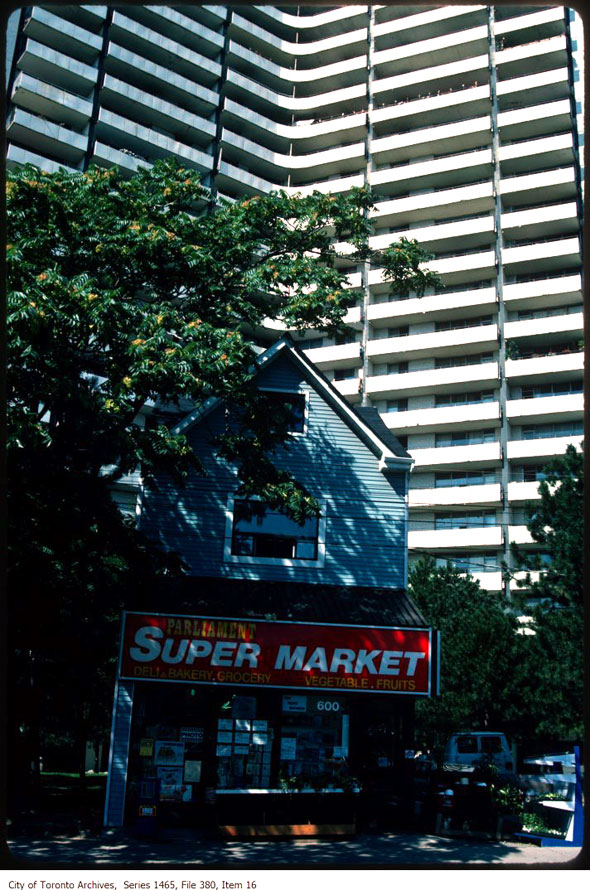 Clearing the area proved problematic. The Toronto Housing Authority and Ontario Housing Corp. leased homes south of St. James Town for the families displaced by construction but found squatters moved into the vacated homes as quickly as they could be emptied. Some people refused to move altogether.

Lucio Casaccio was the staunchest of the early holdouts. His family owned a store at 600 Parliament Street and he was insistent the developers pay $100,000 (about $750,000 in 2014 money) - more than twice the price paid for neighbouring buildings - for the privilege of knocking it down. His father, a tailor like him, had bought the home in 1915 and started the family business out of the building.

Unfortunately for Casaccio, his building wasn't in the way of any of the planned towers and work simply began around his little home. In 1967, the three-pointed building at the corner of Wellesley and Parliament loomed over his backyard.

"We now own all the property between Ontario, Parliament, Howard, and Wellesley streets except his," said Elmore Houser, the lawyer for the developers. "We have told him we are reaching the point where we are no longer interested in buying his property for anything more than its nuisance value, but he won't believe it."

"Do you know the price they paid for the last properties they got on Ontario Street?" Casaccio rhetorically asked a reporter. The answer, it seems, was about $22,000. The developer's final offer was $45,000, which he rejected.

Casaccio scored a victory of sorts. The developers never did get their hands on his home and he got to keep the stump of the public lane that ran past his front door. New World Coin Laundry now occupies an extensively remodelled version of the house he resisted selling for so long. It's the last of its kind on the west side of Parliament between Wellesley and Parliament. 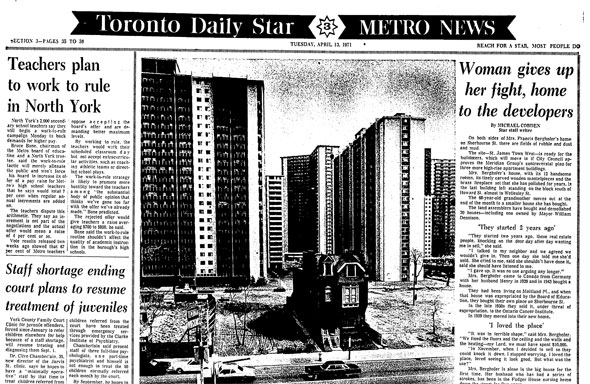 Similar oddities occurred on the other side of the housing development. The second phase of St. James Town, which didn't win final city council approval until September 1971, left buildings marooned along Sherbourne and around the corner onto the south side of Howard, where high-rises were proposed but never built. 583 Sherbourne, a fast food joint, is one of the more conspicuous relics because it is surrounded on three sides by a park.

But not all the second phase holdouts were successful. 68-year-old Francis Berghofer, who lived in a 12-room house near the corner of Earl Street, clung to the property she had lovingly restored with her husband, Henry, as the neighbours towers once again began to encroach on old homes.

"They started two years ago, these real estate people, knocking on the door day after day wanting me to sell," she told the Star. "I talked to my neighbour and we agreed we wouldn't give in. Then one day she told me she'd sold. She cried to me, said she shouldn't have done it, said she should have listened to me."

For Berghofer, refusing to part with her home was a point of pride. The couple's first house on Maitland Place had been expropriated by the Board of Education and they sold their second, also on Sherbourne, in fear of the same. Henry, who had suffered a series of strokes, was in a nursing home, which left the grandmother to face down the developers by herself. "I hate being alone," she said. "I have so many friends round here and I'm well liked."

The fight to save the home with its carved wooden mantelpiece and brass fireplace eventually became too much, and Berghofer sold in 1971.

"I gave up ... it was no use arguing any longer," she said. "I've had enough of being pushed out of places I want to stay in. If they force me out of my new house, the next place I move to will be the cemetery. Nobody will move me from there." 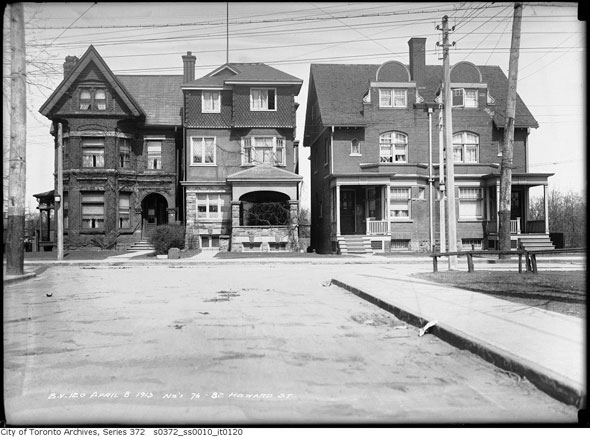 North of Howard, a street named for the architect who gifted the city High Park, there are more Victorian buildings, many of them practically falling down due to neglect. The St. James Town developer had planned to build two more towers here when it started acquiring land in the early 60s. The properties it managed to buy were knocked down in advance of the incoming concrete, but the ones it couldn't get, including No. 76, stayed.

Before the Prince Edward viaduct extended Bloor Street east to Parliament and beyond in 1913, the houses on Howard had a backyard that ended in the steep hill of the Rosedale Ravine. No. 76, also known as the William Whitehead House, was built in 1887 when the address had the cachet of neighbouring Rosedale. Whitehead was a wealthy commissions merchant who had the house built in a Queen Anne Revival style popular at the time.

By 1949, with the street in decline, the building was converted into three apartments.

The latest plan for the block also involves redevelopment. A proposal that was granted final approval by city council in November will see the house uprooted and moved west to a vacant lot. Other forlorn Victorian homes on Sherbourne and Glen Road will be worked into the design, which also calls for four residential towers, the tallest of which will be 45 storeys, and several townhomes.

In true local fashion, the development is currently the subject of an appeal to the Ontario Municipal Board. 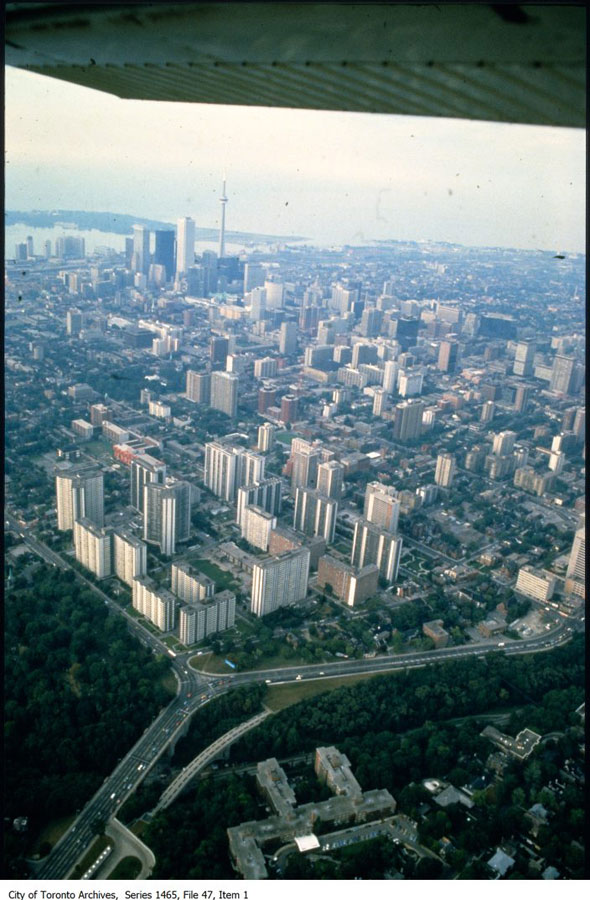