New condo set to shake up Queen and Greenwood

Queen Street East at Greenwood has (so far) been mostly overlooked by the recent popularity of Leslieville and the Beaches, perhaps because the stretch doesn't quite feel like it's part of either neighbourhood.

But that could all be about to change with the arrival of an 8-storey, mixed-use condo on the south side of the street, just west of Greenwood. Where there are currently three semi-detached homes that date back to before 1913, developers are planning a new mid-rise residential building with room for four stores.

The building, as it's currently proposed, would include 110 residential units, split roughly 60-40 between 1- and 2-bedrooms, and a total of 685 square metres of retail. The architects' drawings show the building flush against the sidewalk, then stepping back a metres above the fourth floor. On Memory Lane, which runs directly behind the property, developers Rockport Inc. want 14 "stacked" townhomes with tiny (1.5 square metre) front yards. 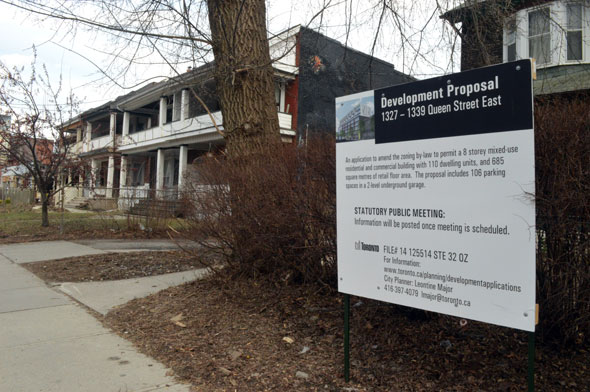 In the planning rationale document on file with the city, the developers say the building is "appropriate and desirable" for this stretch of Queen East. Several other buildings are in the works nearby, too. At 1249-1251 Queen, which, just east of Leslie, includes Queen Street Variety, Noble HVAC, and union offices for Unifor, there's a proposal for a 6-storey building. The vacant lot next to Stratengers and a disused brick building at 1075 Queen are also targets for development.

Retail is currently sporadic beyond Alton Avenue on Queen until the Beaches picks up beyond Coxwell. The strip is a mix of detached homes - a reminder of the old residential make-up of the area - low-rise apartment complexes, and the occasional cluster of stores, including one near the Russell streetcar yard that includes a butcher, pizza restaurant, and the east-end location of the Film Buff movie rental store. 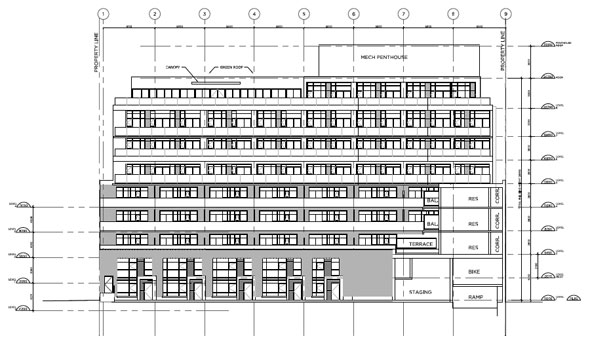 As it stands, buildings on the property are capped at 12 metres, just over a third of what's proposed. The six homes that are due to be knocked down do not have heritage protection, so that's one less hurdle to overcome.

Nobel Auto Service and Blue Sky Autobody, two worn out car repair shops on the corner of Knox Avenue, and the semi-detached home next door are not included in Rockport's plans.