This was the worst winter in Toronto's history

Winter is usually a mess of ice and snow in Toronto, but it's not common for them to be called the "worst winter ever." Yes, it can be face-freezingly cold, but taking a long view it might not seem so bad.

Trying to identify the "worst" winter is, however, difficult. Some were snowy, some were cold, some were both, some featured massive one-off snowstorms while others were a matter of attrition with snow falling for weeks on end.

In recent memory, the winter of 2013/2014 was certainly the worst. The season started with a crippling ice storm and turned into one of the coldest in the last quarter century. Still, if you look back further, there's plenty of competition out there. 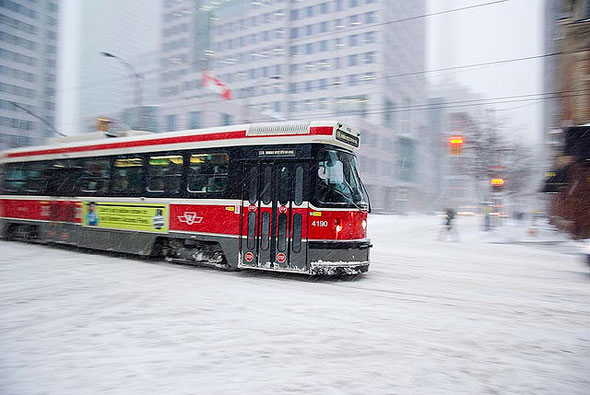 A streetcar dashes through the cold in 2008. Photo by Stephen Gardiner.

Prior to 2013/2014, the most obvious candidate for worst winter was the 2007/2008 season, when 194 cm of snow—just 13 cm shy of the all-time record—fell during a single frigid season. What made that year so unusual was that it followed two extremely dry winters when just 60 cm fell from November to March.

For comparison, the winter average is around 115 cm. Still, if we're defining "worst" in terms of snow, then it'd foolish not to mention the winter of 1999, which lives on in infamy thanks to the mega-storm we received in mid-January. 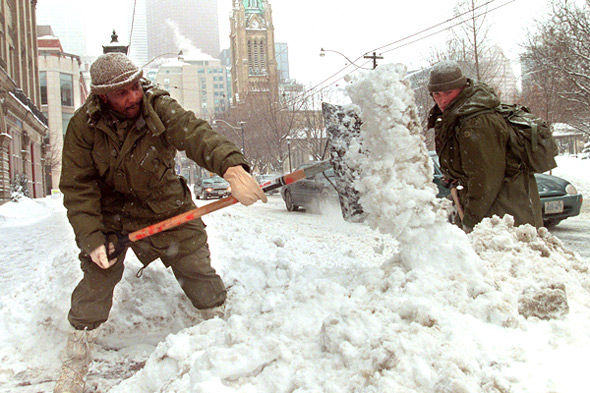 The army digs out Toronto, rendering the city the butt of jokes for years to come.

The blizzard of Jan 14 and 15, 1999 was the final nail in the coffin in what had already been an usually white few weeks. A total of 118.4 cm of snow fell over 14 days that month, piled into waist-high drifts that shut down the subway and airport and forced numerous businesses to simply give up and stay closed.

It probably would have been okay if the snow had melted between storms, as it often does in Toronto, but each successive storm added to the pile. After a monster storm deposited another 27 cm, pushing some drifts over a metre high, mayor Mel Lastman called in 400 soldiers to help with the shovelling.

It's a moment that the city will never live down. Yet, it wasn't actually the worst storm in Toronto's history. 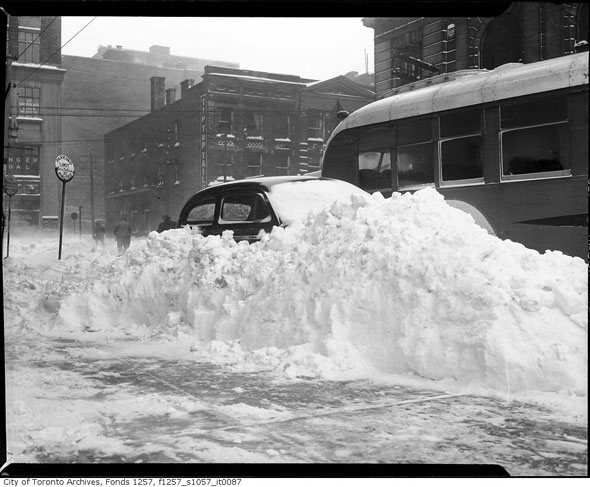 The Great Snowstorm of 1944 wreaked havoc on Toronto.

Winter storms don't come much worse than the one that buried Toronto starting on Dec. 12, 1944. Beginning in the early hours of the morning, hours of heavy snow piled into half-metre drifts that buried downtown buildings up to the first-floor windows.

Phones rang off the hook in the coroner's office as men all over the city suffered coronaries trying to tackle the snow. At Queen and Mutual, a streetcar tipped onto its doors, killing one and injuring 43.

Eaton's and Simpson's, rival Queen Street department stores, were closed by weather for the first time in their histories.

Twenty-one people died in Ontario as a direct result of the storm that had the city drafting schoolboys and garbage workers to help clear streetcar tracks. With that level of tragedy, it hardly matters what the rest of the season was like when evaluating the worst winter in the city's history. 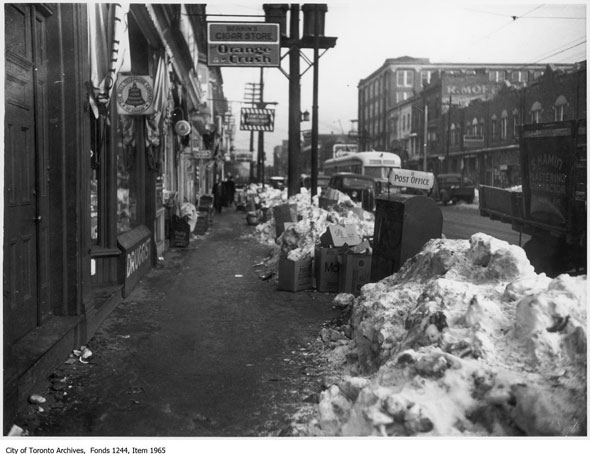 Still, there are other candidate for the title, reaching back further. The winter of 1937-38, for instance, still lays claim to the title of snowiest on record.

More than two metres of snow—207.4 cms to be precise—dropped on Ontario that year and wild weather in Toronto caused highway pile-ups, bus crashes, and damage to the boats on the waterfront. In January, a powerful storm halted practically all streetcar service; hundreds waited in freezing shelters for vehicles that would never arrive. 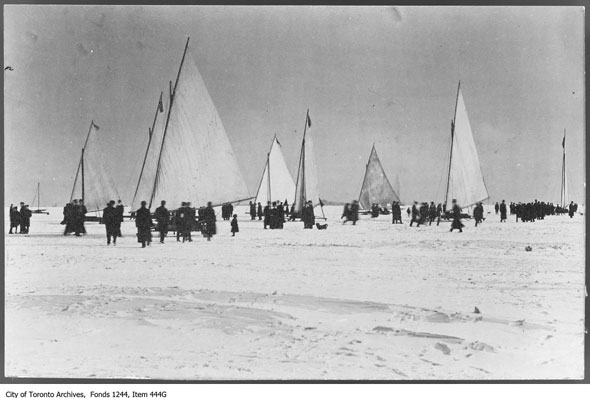 If all that snow sounds bad, it might seem less awful when compared to the coldest winter season ever recorded in Toronto, which can be traced back to 1912.

It takes a lot to freeze Lake Ontario. Its southerly location relative to the other Great Lakes, extreme depth, and impressive width mean the lake stays mostly ice-free through even the coldest of cold snaps—but not in 1912.

A perishing blast of arctic weather—the worst of the last 119 years—caused the lake to freeze a metre thick near Toronto, allowing skaters to reach Rochester, if they desired. There were even races between cars and iceboats on the Toronto Bay.

No winter has delivered a freeze as long and intense as the one experienced in January and February 1912. For 56 days the temperature was below -10 C. To make matters worse, 143 cm of snow fell over the same period, more than we've had in recent memory.

I think we have a winner.