The 5 strangest machines designed in Toronto

What is 34 metres long, 7 metres tall, and buried under Lake Shore Blvd.? The answer is Knapp's Roller Boat, a cigar-shaped vessel that promised to make sea sickness a thing of the past, or so its owner claimed. The hull would meet an ignoble public demise on the shore of the Toronto Bay before it was finally covered over.

The strange ship is one of many peculiar conveyances with ties to Toronto. Over the centuries, the city has seen strange flying machines, UFO-style hovercrafts, fragile hydrogen balloons, and a massive award-winning quad-copter.

Here are five crazy contraptions that floated on our waters and flew in our skies. 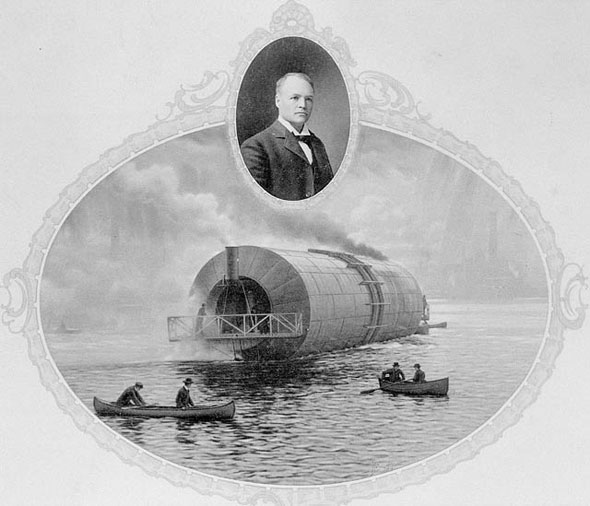 In 1897, crossing the Atlantic Ocean by steam ship was a lengthy and, in bad weather, stomach-churning proposition. In the days before over-the-counter Dramamine, engineers like Frederick Augustus Knapp believed a "roller boat" - a vessel capable of driving on top of the waves - was the answer to passengers' woes.

Though several were proposed, Knapp was one of only two people to actually construct a working example of the concept. His cigar-shaped vessel, 34 metres long, 7 metres tall, was essentially a cylinder inside a cylinder; a stationary passenger cabin around which a giant paddle revolved.

The ship was welded together at Polson Iron Works, a shipbuilding company located south of the Esplanade between Frederick and Sherbourne streets. In trials Knapp's Roller Boat never managed to travel above a crawl, well short of the 200 km/h predicted by its owner.

After a brief stint as a ferry, the roller boat was sold for scrap and buried under Lake Shore Blvd. by infill. It's still down there, apparently. 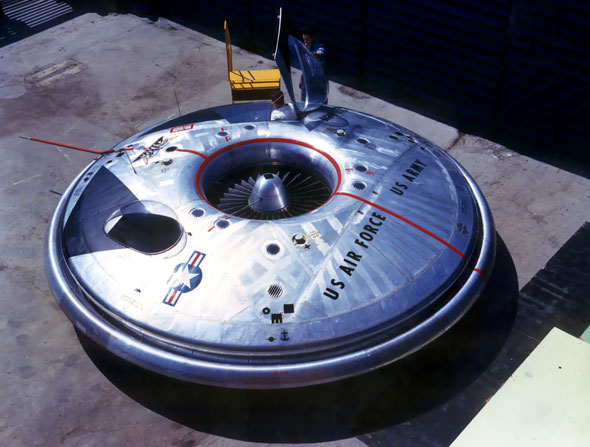 Imagine hovering to the store in your own private flying saucer - that was the dream of Avro's top-secret Special Projects Group and the U.S. Army in the early 60s.

It was at Downsview military base in 1951 that Avro aircraft engineer John Carver Meadows Frost - "Jack" to his friends - first conceived of a high-speed, high-altitude flying saucer for military use. Various shapes and designs were tested but none could achieve the stability and pace projected by wind tunnel tests.

The design was later tweaked to have low-altitude, all-terrain capabilities but still stability and control issues persisted, largely due to the lack of a traditional tail fin, rudder and stabilizers. Videos show the Avrocar hovering about 1-metre above the ground, but it never got any higher.

The science was sound: modern hovercraft use a similar method of lift, albeit with a separate set of engines for propulsion. Faced with a lack of progress and escalating costs, the U.S. Army eventually pulled out and the Avrocar project was canned in 1961 having never captured the nation's imagination like the Avro Arrow. 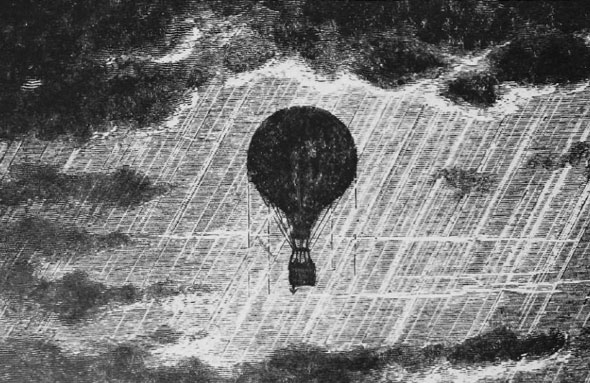 More than 40 years before the Wright Brothers managed the first powered flight at Kill Devil Hills, North Carolina, the gas balloon was king of the skies. Unlike modern hot air balloons, the incredibly fragile flying sacks used lighter-than-air gasses to lift the basket and pilot off the ground.

Height was regulated by the amount of gas in the balloon and landings affected by the gradual reduction of ballast. The direction of travel was entirely at the mercy of the wind.

Professor John H. Steiner, a German-born aeronaut, brought his hydrogen balloon to Toronto and a vacant patch of land at Front and York in August 1859. For a few weeks, Steiner took wide-eyed and weak-kneed passengers on tethered ascents to 152 metres, about the height of the CIBC tower at Yonge and Bloor.

Steiner flew out of Toronto for Oswego, New York later that month. It was a characteristically eventful 9-hour trip that ended in a crash landing in a swamp. By successfully completing the crossing, the aeronaut became the first person to fly across Lake Ontario. 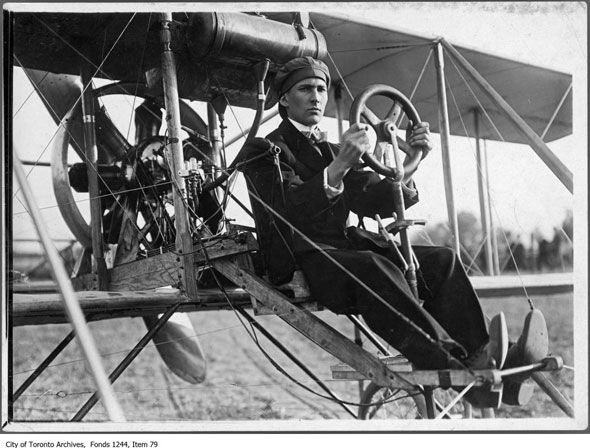 John Alexander Douglas McCurdy was Canada's first licensed airman and the first person in the British Commonwealth to make a controlled ascent in a powered flying machine. A Nova Scotian by birth, the unflappable J.A.D. was part of Alexander Graham Bell's Aerial Experiment Association, a team of aviators determined to develop the first working airplane.

The group wouldn't be the first in the air, but McCurdy would be at the controls of the Silver Dart, the first plane to fly in the Commonwealth when it took off from the frozen surface of Bras d'Or Lake, Cape Breton in 1909.

McCurdy used his experience to make several exhibition flights in an improved bi-plane in 1911. At an aviation meet at Donlands Farm near Todmorden Mills that same year, McCurdy lost control of his aircraft on takeoff and crashed in a nearby field, wrecking the $2,000 frame.

McCurdy walked away uninjured but the strange machine with its Gnome rotary engine and rear propellor was a permanent write-off. 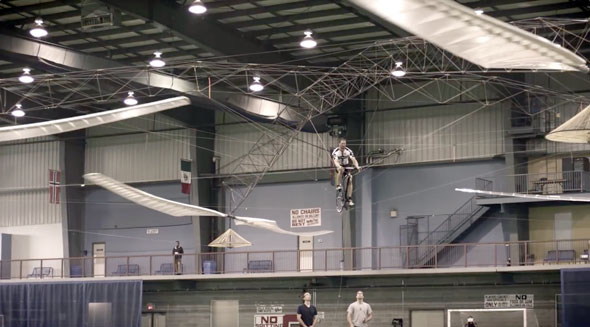 The dream of a human-powered helicopter flight was so elusive that in 1980 the American Helicopter Society pledged $250,000 to anyone able to build a machine capable of a minute's stable flight, three metres off the ground.

The prize was named in honour of Igor Sikorsky, a Russian aviation pioneer and one of the society's founders, and was finally claimed in July 2013 by a team of engineering graduates from the University of Toronto in a sprawling, pedal-powered device named Atlas.

The machine - technically a quad-copter - was developed Todd Reichert and Cameron Robertson and powered using a specially adapted bicycle. It's frame is 58 metres wide and each of its four rotors is 20 metres across. In all, the entire machine weighs just 55 kgs.

Atlas hovered within a 10 x 10-metre square, per the 33-year-old award's criteria, at the Ontario Soccer Centre in Vaughan and has since gone on to set new records for endurance human powered helicopter flight.