A new collection of "re-photography" by Toronto photographer Harry Enchin has found a way to link the city of of the early to mid 1900s with present day by blending black and white photos with crisp colour originals, producing a tantalizing and sometimes incongruous blend of old and new.

Dusty workers in caps and suspenders lay streetcar track on Dundas as a bright red modern streetcar approaches; monochrome women in straw hats stroll past Old City Hall unaware a woman in a short blue dress is cutting past. 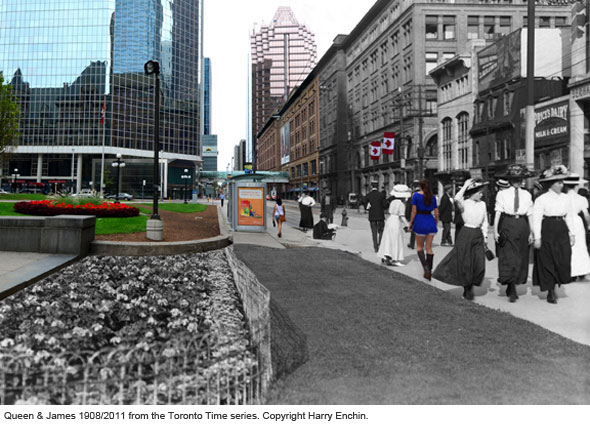 "About 10 or 15 years ago I went for a drive with my mother to the Junction," says Enchin. "Dundas and Runnymede specifically is where she grew up, she's the ninth of ten children. When we went there for the drive of course her family home was long gone and that got me thinking about changes to the city"

"I wanted to do a project that would combine the old with the new and evoke memory through photography. In recent years my mother developed some memory loss, and that furthered by interest." 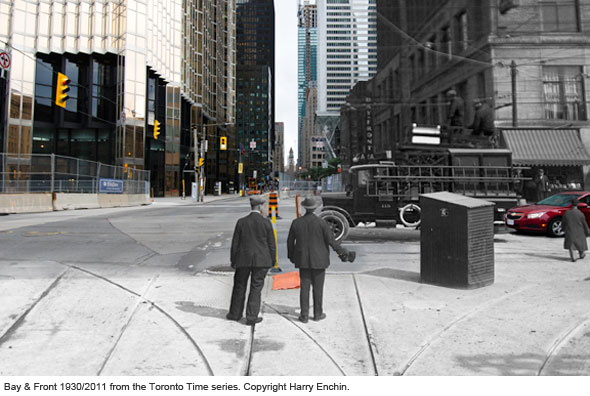 Enchin visits the city archives at Dupont and Spadina, selects a high-quality image from the collection - something evocative, like a newsstand or a newsboy - and takes a copy on location to help line up his shot. The two images are then carefully spliced together using digital imaging software.

Enchin's favourite is the one at the top of the page, of the workers laying streetcar tracks just east of Osssington. "There's a social commentary there ... even though they're hamming it up for the camera, you can sense the pride in their work to look in their faces, and that's very interesting to me. But look a little closer and you'll see there's no protective gear, no safety gloves, no safety helmet, and they're working with shovels and a jackhammer." 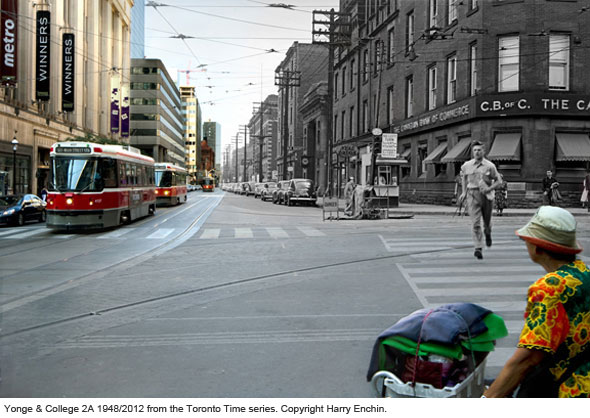 "It's a very interesting commentary on how things have changed over time. They can be really proud they're building the infrastructure for decades to come for the city of Toronto but little do they know behind them, coming down the rails, is the newer version of the streetcar."