There was a time locally when only one brand of potato chips mattered - Hostess Potato Chips.

Owned by powerhouse General Foods, Hostess Potato Chips monopolized the snack food industry between 1959 and the early 1990s with strong flavours, and stronger favor. If you were a kid during that era, you may remember Hostess being revered as the almighty God of chips.

According to the current owner Frito Lay's website: "Hostess Chips had its beginning in 1935, when a young Beaverdale farmer began cooking potato chips on his mother's kitchen stove. Little did he realize that the finest potato chip manufacturing operation in Canada was to grow from this humble beginning. The youth's name was Edward Snyder; the company he founded became known as "Hostess."

Through a deft blend of simple colour coded branding, quality control, and an aggressive distribution strategy, Hostess were kings of all things chip related: Blue was Regular, green was Sour Cream & Onion, yellow was Salt & Vinegar, and deep red was BBQ. Eventually Ketchup, BBQ Chicken, and Sour Cream & Bacon joined the hallowed ranks. A bag cost roughly 25 cents, and came in a no frills tin-foil packet. Salt was bountiful, and the burning vinegar taste packed an unforgettably savoury wallop. It was truly finger lickin' good.

Their greatest boon however came as a response to their greatest blunder. In the late 1970s, in a marketing manoeuvre on par with Coke's inexplicable decision to change their billion dollar taste, Hostess released three new, fruity flavours of potato chip - Cherry, Orange and Grape. The retching, heaving sound of disapproval can still be heard (and felt) to this day - with many people taking to the internet claiming that even after almost 40 years they still cannot get the awful taste out of their mouth.

Born out of this howling dud in 1981 were the Munchies, 3 goblin type creatures created to cheerlead the brand and its booming new tagline - "When you got the munchies, nothing else will do".

Throughout the 1980s the loveable trio of Munchies were woven into that uniquely warped tapestry of immortal Canadiana advertising mascots, rivalled only in ubiquity by Captain Highliner. They appeared not only on TV, but in local parades, at the CNE, at shopping malls, and even in commercials for convenience stores like Beckers. Plush replicas of them slept in many childhood beds as they traversed the landscape of 1980s pop culture - video games, heavy metal, Michael Jackson and breakdancing.

Also memorable were the collectable stickers you could find inside bags of Hostess chips. Baseball, wrestling, and rock band themes were the most popular, but the endless cycle included TV show and movie tie-ins as well. Occasionally in thrift stores you can come across ancient household appliances adorned with half scratched off Hostess wrestling stickers.

As the 1990s dawned, Hostess Chips fell victim to what Wikipedia terms "brand erosion with the introduction of various "upscale" brands such as Kettle Chips and Miss Vickie's". By 1996, they were gone, replaced by the dull packaging and even duller taste of Lays. 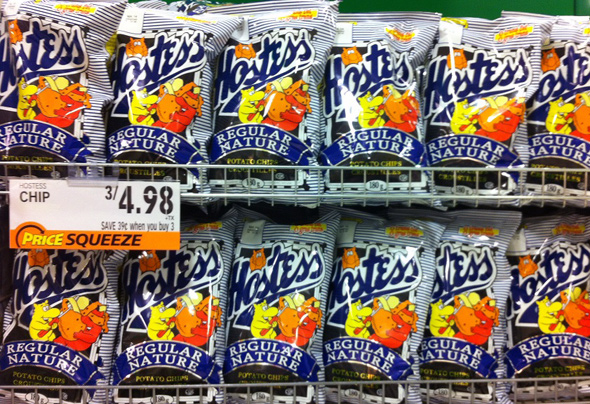 You can still find Hostess at Food Basics and Price Chopper, or online at Canadian Favourites, however they are HINO (Hostess in name only): Lays chips bagged in Hostess branded packages so that Frito Lay can maintain its trademark protection on the Hostess brand, which has long been dropped by the corporation.

The real deal is gone, and sadly when you got the Munchies, nothing else will do.