That time Toronto went supersonic with the Avro Arrow

Somewhere in the murky depths of Lake Ontario around Prince Edward County lies several test models of what was once the most technologically advanced fighter aircraft of the 1950s, the Avro "Arrow." Since the models lacked engines and pilots, the prototypes were blasted into the air by booster rocket and observed as they flew (or fell in style.) Once spent, the shells crashed into the water, never to be seen again.

But that hasn't stopped a team of enthusiasts looking. Arrow Recovery Canada, a trust that users SONAR to scour the lake bed, has been trying for more than a decade to find any trace of the aircraft project that was abruptly and contraversially scrapped in the late 1950s amid accusations of Soviet espionage and political conspiracy. 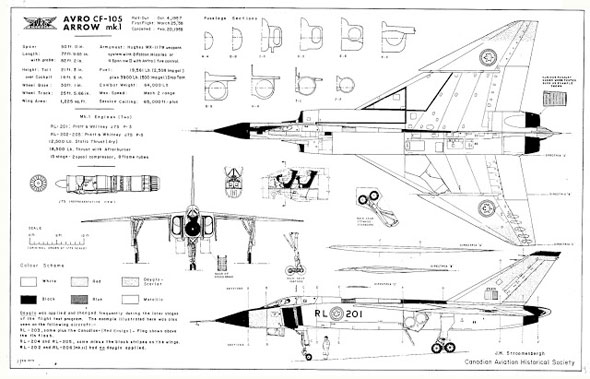 The Arrow and other fighter jets in its class have their roots in the post-war suspicions of long-range nuclear missile exchanges between the Soviet Union and North America. To counter the threat of an incoming warhead, Canada and the United States developed high-speed interceptors capable of catching and destroying incoming threats.

A.V. Roe Canada Limited, developed as a subsidiary of the British Hawker Siddeley Group - the "H" in many of Toronto's older subway cars - operated out of Malton Airport, now Pearson, and was charged with developing two types of interceptor craft: the sub-sonic CF-100 Canuck and a prototype jet capable of breaking the sound barrier.

Supersonic flight would enable an even quicker response to military aggression and was a target pursued on both sides of the Atlantic. "Wave drag," a phenomenon encountered by conventional aircraft approaching the speed of sound led to the development of new wing designs that appear on the famous Concorde airliner and other high-speed jets.

The first prototype Arrows underwent wind-tunnel and computer model testing in 1954. Giant IBM supercomputers provided telemetry data to engineers, as boasted in a full-page ad in the 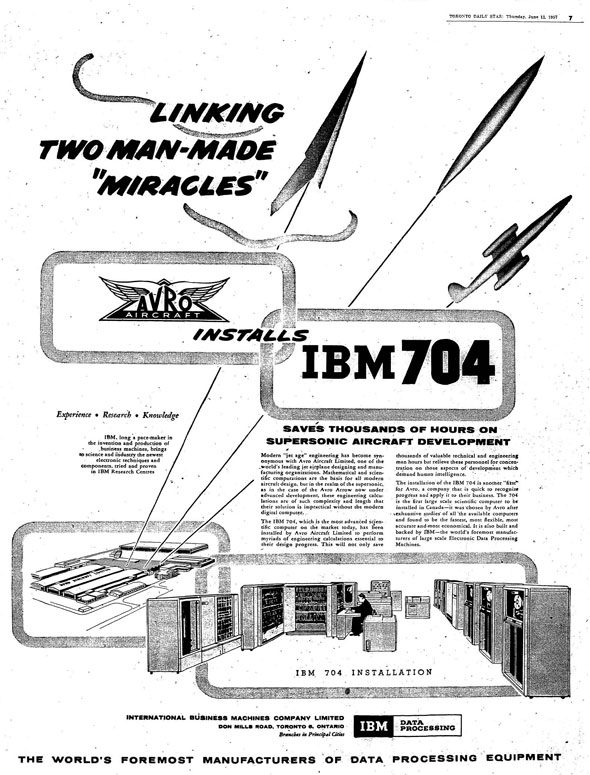 Toronto Star from 1957. It was during this stage of development that the first engineless vessels were strapped to Nike rockets at Point Petre in Prince Edward County for real-world aerodynamic tests. Similar launches took place on the Atlantic coast of Virginia.The Arrow officially went into full-scale production in 1955 and the first completed plane, marked RL-201, was to be presented to the public and media on Oct. 4, 1957. Unfortunately for Avro and the Canadian government, the launch of Sputnik, Earth's first man-made satellite, by the Soviet Union the same day overshadowed the new fighter somewhat.

First world war Polish-born fighter pilot Janusz Å»urakowski was at the controls of RL-201 when it took its first official test flight on March 25, 1958. As engineers grew more confident with the design, the plane would be pushed to Mach 1.98 - 2,426 km/h - on subsequent runs. Pilots including Å»urakowski consistently reported good handling, though on two occasions the landing gear collapsed on landing at Malton Airport resulting in minor damage. 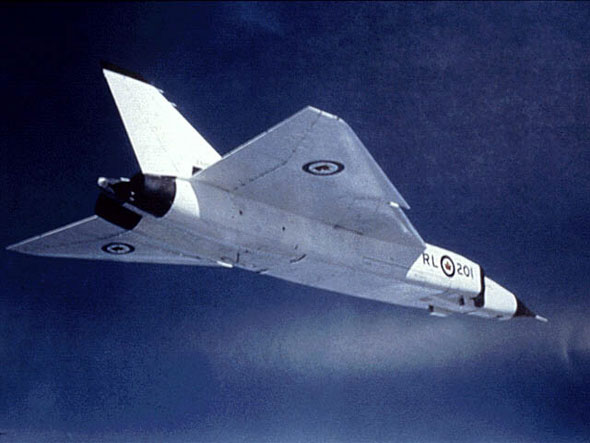 Behind the scenes, things weren't looking good for the Arrow. New Progressive Conservative prime minister John Diefenbaker was elected in 1957 on a platform of spending cuts that put costly projects like the development of the Arrow firmly in the spotlight. Shortly after entering office, Diefenbaker signed the agreement that established NORAD, the missile-defense program that still monitors all traffic over Canadian and American soil to this day.

With NORAD came a commitment to two different methods of protecting the airspace above North America: an automated system of interceptor missiles developed by the US or aircraft-based defense via the Arrow project. To keep the defense budget down, Minister of National Defence George Pearkes repeatedly recommended the Arrow project be scrapped in favour of automated defense, especially as the threat from space was deemed to be escalating with Sputnik.

The Cabinet Defence Committee, a forerunner to the Cabinet Committee on Foreign Affairs and Defence, twice refused the cancellation but, controversially, killed the Arrow at the third asking without review in 1959. At this point, five of the aircraft were flight-ready and another, RL-206, was nearing completion. Almost 15,000 staff involved with the project lost their jobs in the aftermath, earning the day of the decision the title "Black Friday" in the aviation industry.

Ostensibly to protect design secrets, all of the aircraft, spare parts, and engines were destroyed. Well, almost all. The nosecone section and two wing panels of the sixth Arrow was, amazingly, smuggled out of Malton Airport and kept hidden at CFB Downsview for many years. The parts and a salvaged engine are on display in Ottawa.

Rumours that an entire aircraft had been spirited to safety went largely unfounded until Air Marshal Wilfred Austin Curtis, the former head of Avro, suggested in a 1968 interview that the location of a hidden plane could only be revealed in a more favourable political climate. He died in 1977 and no surviving Arrow has ever been publicly acknowledged.

With suspicions between the governments of North America and the Soviet Union reaching their chilly nadir in the early 1960s, it was often hinted that a spy had infiltrated Avro and the Arrow project on behalf of the Soviets. That theory was lent some credence in the early 1990s with the release of the Mitrokhin archives, documents obtained by the defection of a top Russian spy. The extent to which Avro may have been compromised is only hinted at and there has been no other confirmation of Soviet espionage within the company.

Quite how destroying the original materials could protect information that may already have been stolen isn't clear, but the lack of a surviving aircraft is likely what spurs "Arrowheads," devoted fans of Canada's first supersonic fighter, to literally plumb the depths for tangible evidence of what was widely considered to be one of the world's most advanced vehicles that nixed before its time.

So far they haven't found much, but the search continues.