The poor Gardiner. Not only is it a gigantic, largely despised eyesore that cuts the city off from its waterfront, it's now falling to bits as well. I recall the troubled story of Toronto's only downtown highway below.

Also this week, the subway stations we could have had. This city has had several east-west relief subway lines cancelled over the decades and I've got a list of every planned, but never built, downtown station. Bummer.

Finally, I profile Veronica Foster, the face of light ordnance in Canada during the second world war.

The image above shows a runner puffing through an uphill climb in Edwards Gardens. Earlier this week the park's management warned that without a funding increase the botanical gardens, also part of the green space, may have to close. A decision isn't expected on new funds for at least a year.

Facts on the Gardiner 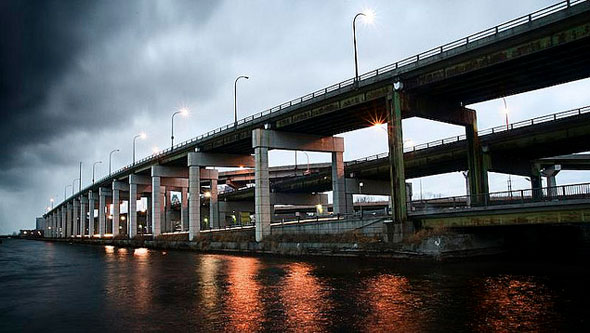 The Gardiner Expressway hasn't been in anything approaching rude health for some time. Bits of concrete have a nasty tendency to drop off and a new report revealed this week by The Star says the structure is a significant hazard to public safety. Until now we had been assured before everything was A-OK, just flaky. Here's the story.

The Frederick G. Gardiner Expressway was built between 1955 and 1966 from the Humber River to Leslie Street, where the road awaited connection to a planned Scarborough highway. Construction cost roughly $110 million and required paving of parkland, demolition of houses, removal of Sunnyside amusement park, and almost the destruction of Fort York (protests persuaded Metro Toronto to adjust the route.)

Starting from the west, the road was completed in sections starting with the stretch from the Humber River to Jameson Avenue. When this section opened in 1962 it lacked median guard rails and other vital safety features. The Jameson Avenue to York Street, York Street to the Don Valley Parkway and Don Valley Parkway to Leslie Street sections were added in the years that followed. The westward extension to Highway 427 was added in 1997.

Thankfully, a major road widening project that would have seen the highway increased to eight lanes between Strachan and the Humber with a feeder lane from Front Street was killed off by the province in the early 1980s.

Then the cracks started to appear. The original pylons, sunk into mud, not bedrock, started to sink at differing rates near the Humber, giving the road a decidedly uneven appearance. The bridges and pylons were repaired at a cost of $100 million.

Faced with an expensive maintenance bill for the most easterly section of elevated road, the city decided to tear down a portion of the Gardiner from the Don River to Leslie Street in 1996. Several disused pylons form an art installation near the highway's former eastern terminus.

The Gardiner's current concrete issues stem from natural processes. Water, oxygen and salt have seeped through the porous surface of the highway and corroded the steel reinforcement bars underneath. As water freezes and expands in winter it separates the outer cladding from the inner structure, resulting in baseball sized chunks dropping to the street below. Right now, the 46-year-old artery's future is looking less than certain. 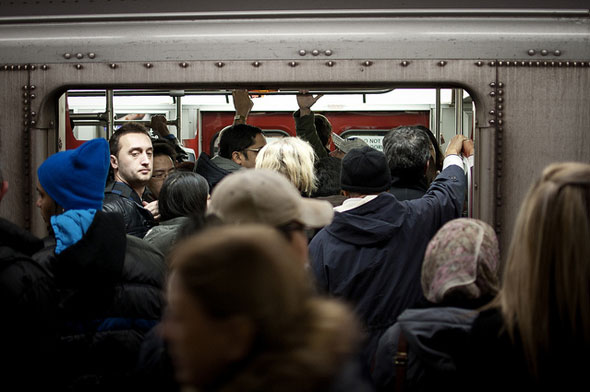 The Downtown Relief Line returned to the transit conversation again this week after the TTC released a report calling on Metrolinx to make the project a top priority in its Big Move expansion project. The idea of a subway line to ease pressure on crammed Yonge line isn't a new one - east-west lines south of Bloor have been tossed around in various forms in Toronto since 1942. Here are some of the stations we could have had. 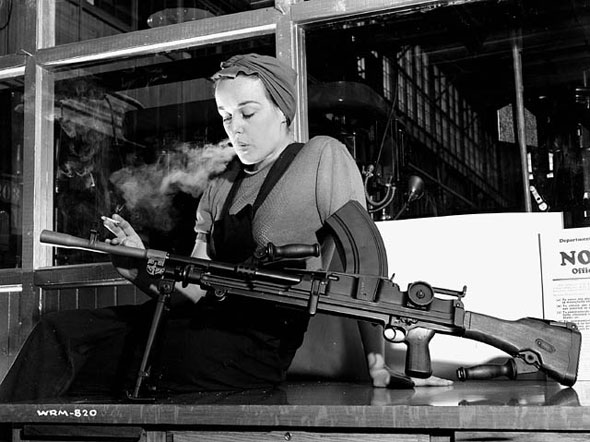 While researching posts this week about the adaptive reuse project on the old Central Prison chapel I came across pictures of Veronica Foster, aka "Ronnie, the Bren Gun Girl," smoking and generally looking cool in a machine gun factory.

Foster worked at the Inglis plant in the Liberty and Strachan area during the second world war and became something of an icon, appearing in several poster campaigns that showed female assembly line workers contributing to the war effort in a positive light. She was also photographed in several "glamourous" settings for calendars and other promotional material.

Foster bore a resemblance to the more popular American "Rosie the Riveter" character, a symbol of the female workforce that underpinned the country's munitions production.

The strange newspaper costume, shown below, was conceived for the presentation of "Miss Headline 1946" at a press club event called the Byline Ball at the Royal York hotel. Foster, also a singer and dancer, performed at the event. Foster also made appearances on CBC radio during the 40s and 50s. She seems to have faded into obscurity by the 60s. 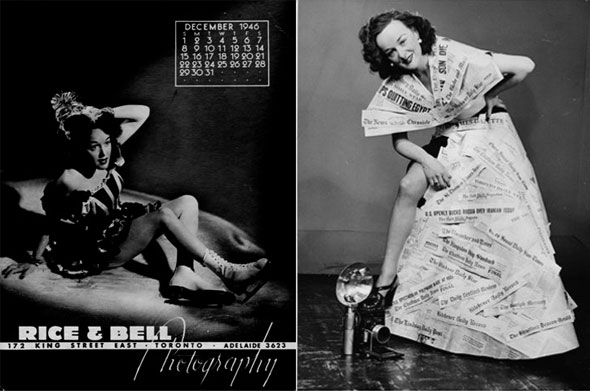