Transit expansion is happening in Toronto, just not where most people can notice it. Union Station is currently undergoing a massive $640-million renovation and expansion of the underground concourse level, adding new GO, Via and TTC facilities. In the original ticket hall, workers are preparing to give the walls and ceiling a good scrub. There's one place they won't touch, though. We find out where that is below.

Further down, there's an answer to the question of whether Toronto's pedestrian crossing buttons actually make a difference to the lights at busy intersections and a look back at the history of Regent Park.

This week's lead image shows Roy Thomson Hall and an easterly view of King Street. The intersection of King and Simcoe has a rich history belied by its relatively low-key status today. Roy Thomson Hall, named for a Canadian newspaper magnate, stands on part of the former site of Government House, a grand home for Ontario's Lieutenant Governor. Learn more about the building here. 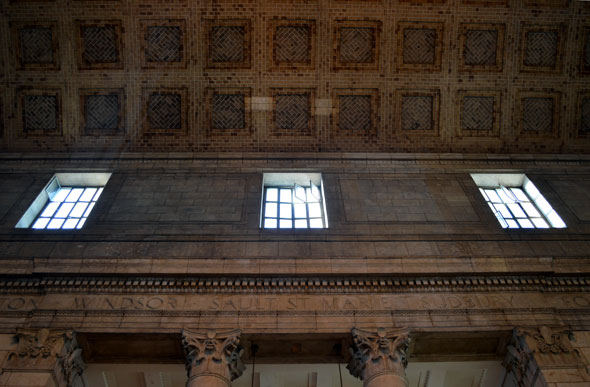 As you may have seen earlier this week, construction workers at Union Station allowed reporters behind the scenes for a chance to get an fresh look at the major excavation and structural reinforcement project taking place in the depths of the old building.

As part of the project, which involves adding a new retail, GO and Via rail concourse, workers will be buffing decades worth of dirt off the limestone interior of the great hall. The picture above shows a test patch on the ceiling where workers have managed to restore the luster of the original stone. 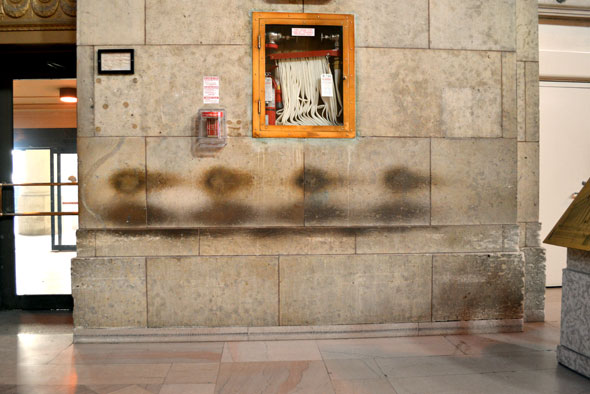 One place the cleaner's brush won't touch is stained into the wall near the Front Street entrance to the main hall. Here the shadows of four heads and shoulders are stained into the stonework where luggage porters used to (and sometimes still do) sit between incoming trains.

Now largely confined to the past, porters at Union Station - formerly called "red caps" for their felt headwear - have a long history that Drew Halfnight explored for the National Post in 2010.

"The outlines are perhaps stains from their hair treatments in those days or just wear and tear from when they leaned back. It's the ghostly shadows of porters past," says Richard Coveduck, an engineer working on the project. "It will not be cleaned, it will be restored and kept in some fashion as an artifact of the station." 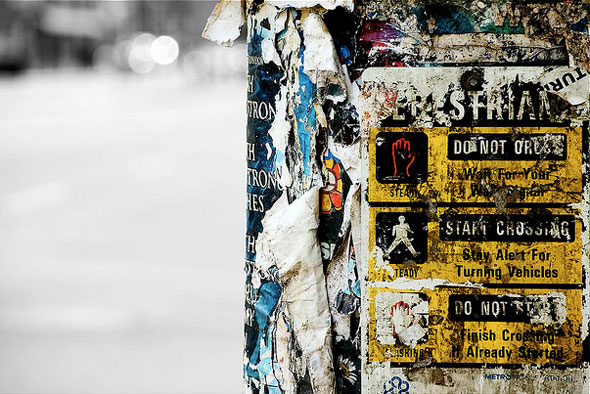 While researching a post this week, I came across a reference to New York City's use of placebo pedestrian crossings - once functional crosswalk buttons that are now invisibly disconnected from the software that controls the lights, giving the pedestrian a sense of control while leaving the complex work of managing traffic up to a central computer.

On many levels placebos make a lot of sense. Many of the city's busiest intersections operate in complex cycles and Joe Public could only serve to slow things down.

Curious to find out if we had any placebos here, I spoke with Linda Lee from the city's Transportation Services department. Surely the buttons at Yonge-Dundas Square don't actually speed up the white walk light, do they?

"We don't do that in Toronto," says Lee, "all the push-buttons we have in the field either cycle the signals or bring on a certain operation."

That "certain operation" is an distinct audbile chirp (as well as the "walk sign is on for all crossings" voice) and clearly-felt vibration from the push-button box to give hearing or vision impaired pedestrians an obvious signal when the coast is clear. In many cases, that's the only function of the push-box.

The city's policy is to only install accessible pedestrian signals from now on. While most will retain their signal cycling functionality, some will be purely for those who have trouble recognizing the conventional red and white signals. I bet that won't stop you pressing anyway.

I posted this video in the Morning Brew earlier this week but now it's the weekend I suspect more people will have time to watch. Here's a short 1953 documentary from the National Film Board about the residents of Oak Street in Toronto, home to "verminous walls, unhealthy rooms ... juvenile delinquency, drunkenness and broken marriages," getting access to a new housing development, Regent Park.