A short and violent history of Toronto's Central Prison

Toronto's barbaric Central Prison, a place where inmates were routinely beaten and subjected to cruel and unusual punishments, often for petty crimes, is thankfully long gone. The last part of the original Victorian structure is presently at the centre of a development proposal by a local restaurant chain. If approved, the former chapel of the old jail will be repurposed into a bar and grill.

Ironic really given the building's connection to the Roman Catholic faith and the numerous people locked up just beyond its walls for drunkenness.

Looking back on Central Prison, its practices, and inmates is to take a trip into an arbitrary and brutal time when relatively minor transgressions were punished with shocking savagery. The consequences of breaking the law were never so terrifying in Toronto. 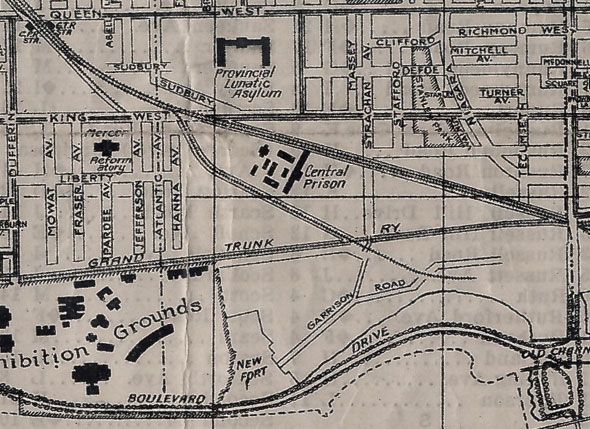 The origins of Central Prison can be traced back to the popular mid-1800s notion that prisoners should be put to work while incarcerated. Overcrowding at the Don Jail and several other city institutions led to the creation of this and two other provincial institutions in Kingston and Stratford. A good work ethic and strict rules would surely straighten out society's deviants.

Built in 1871 by its future inmates to plans by official government architect Kivas Tully, the three-storey, 336-cell facility just southwest of King and Strachan included two large workshop areas at either end of its matching wings. Armed ex-police and army prison guards imposed a rigid military style structure within its halls under the stewardship of a former-alcoholic and ex chief of police warden.

A mutually beneficial agreement with the Canada Car Company, an early manufacturer of passenger and freight vehicles for various railway lines in Ontario, Quebec, and British Columbia, part-funded the prison's construction. Railway tracks branched into the prison grounds from today's GO Kitchener line, enabling the finished vehicles to be rolled out and completed at the CCC's own dedicated factory.

An active woolen mill, blacksmiths, furniture shop, kitchen and bakery also produced products for other prisons and for the commercial market. Prison workers also built many of the streets in today's Liberty Village using an on-site brickyard. The income from these projects and sales from the various workshops funded the day-to-day operation of the facility. 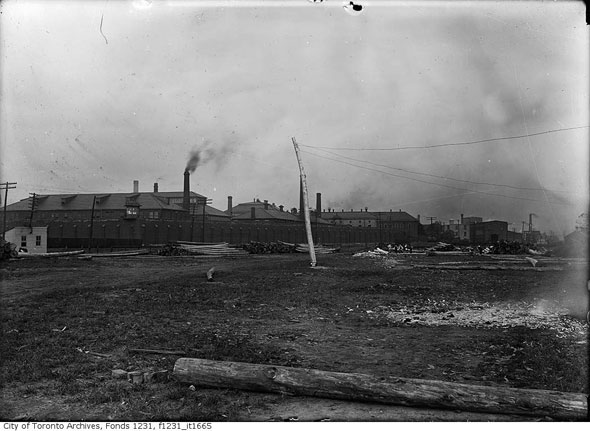 Although it purported to provide honest rehabilitation, the jail quickly developed a dark reputation as a place of severe beatings, deprivation, and despair. The prison didn't have running water for its first five years - it would take ten years to get electricity. Minor transgressions resulted in whippings, protracted periods in solitary confinement, or "ironings," the practice of shackling men to a wall in a standing position until long after their legs gave way.

According to author Ron Brown in his book Behind Bars: Inside Ontario's Heritage Gaols, "the rule of silence was strictly enforced ... so common were the beatings that the prison was labelled at the time as a 'terror to evil-doers.'"

"Evil-doers" is something of a stretch for the majority of those sentenced to time at Central. Peter Oliver from the Osgoode Society for Canadian Legal History in 'Terror to Evil-doers': Prisons and Punishment in Nineteenth-century Ontario says the majority of the crimes that resulted in a custodial sentence at Central were against property.

36.7 per cent of prisoners were being held for larceny, 15 per cent for vagrancy, and 7.5 per cent for drunkenness over the 40 years the institution was in operation. Oliver also writes that assaults were frequently viewed by the day's society as momentary lapses in judgement, where as property offenses were seen as more likely to be premeditated.

Successive wardens tried to ease the level of violence at Central but attitudes towards the rehabilitation of offenders was already beginning to change. In 1911, one of the last heads of the jail, Dr. J.T. Gilmour, was praised for allowing prisoners to work without an armed guard. In 1915, the last inmates were transferred to the Ontario Reformatory in Guelph and the building closed, a failed experiment.

After a short period of disuse, the former Central Prison found new life as a military factory and storage facility where it produced airplane parts. Other factories in the area, including the now-demolished Russell Motorcar Company building, produced materials such as fuses and bomb casings for the war effort.

A later Inglis plant, part of which would include a piece of the prison, produced bren guns for use in the second world war and created Canadian icon Veronica "Ronnie, the Bren Gun Girl" Foster.

At the end of the first world war Central Prison again found itself vacant. It briefly served as a processing centre for new immigrants and was mostly demolished in 1920. A small chapel at its southern end and a paint shop near the rail tracks were all that remained standing. The chapel is currently the subject of a redevelopment proposal by Pegasus Group, the operator of several local restaurant and bar brands. 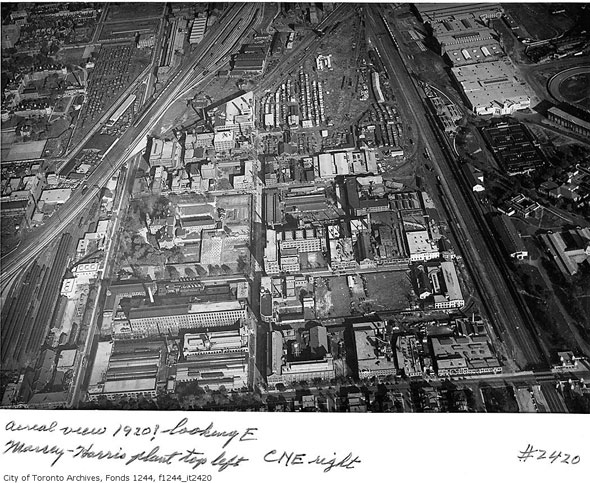 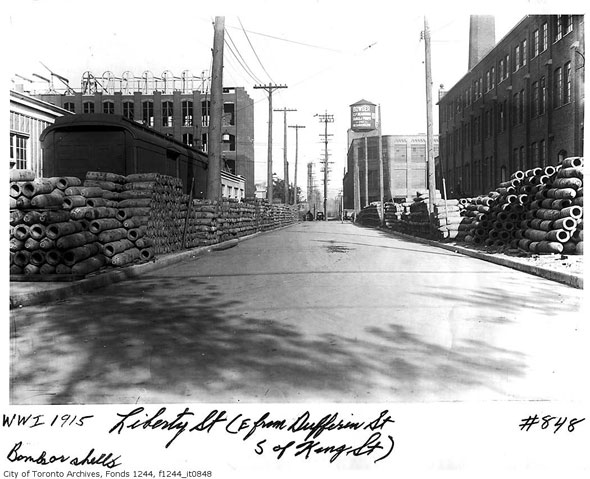 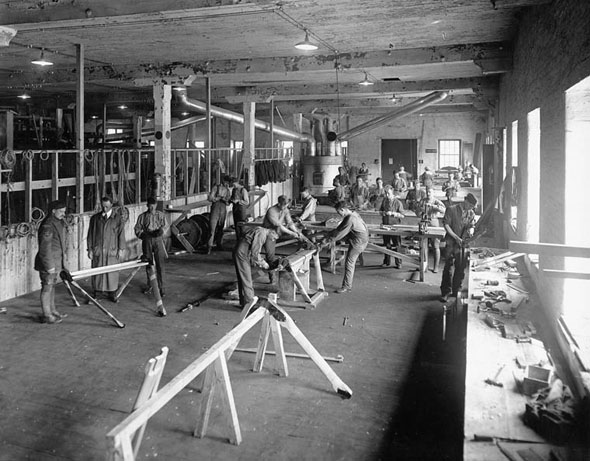 Soldiers at work in old prison 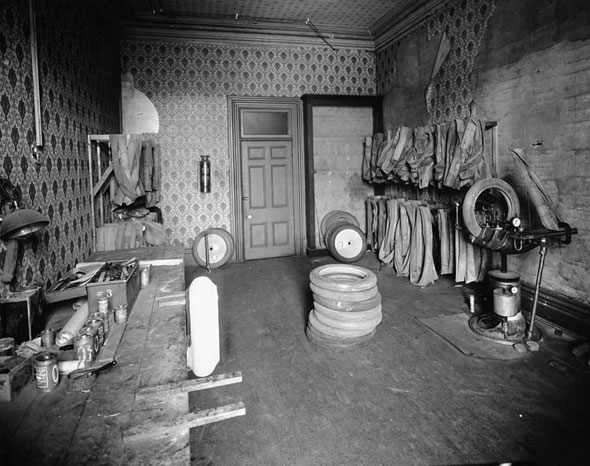 A military tire shop within the prison 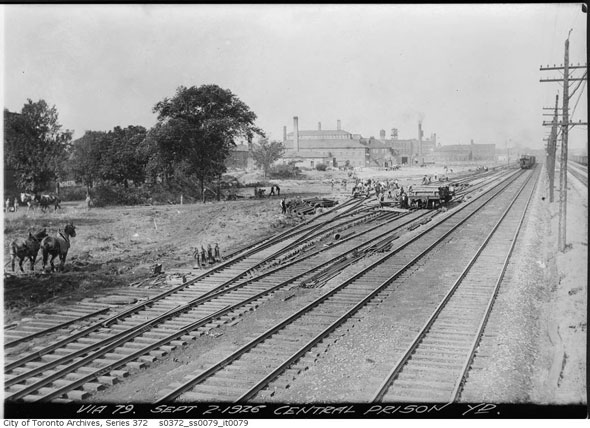 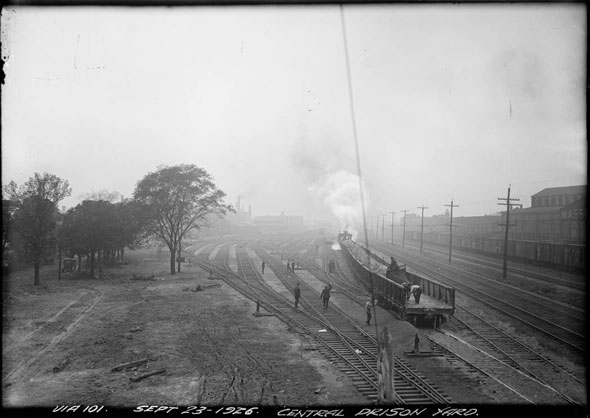 Alternative view of the tracks 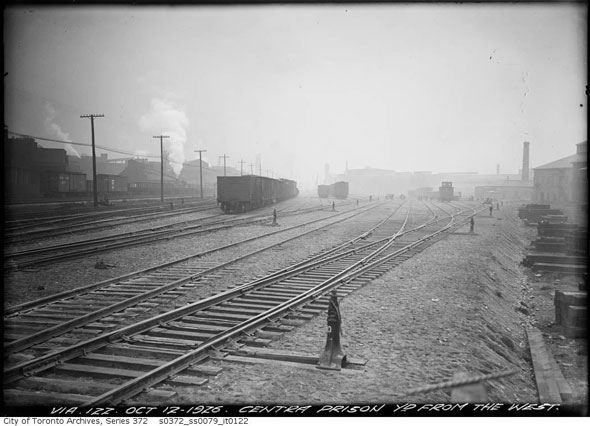 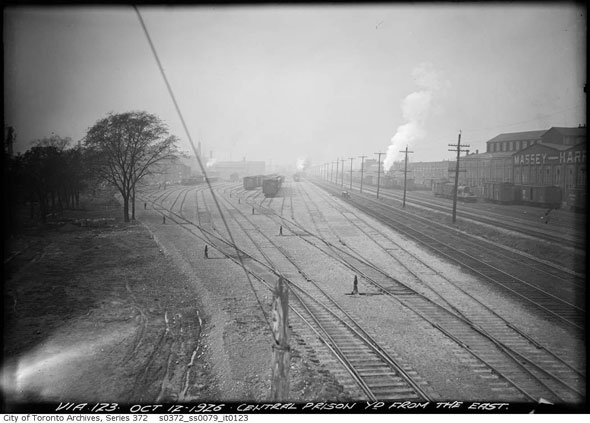 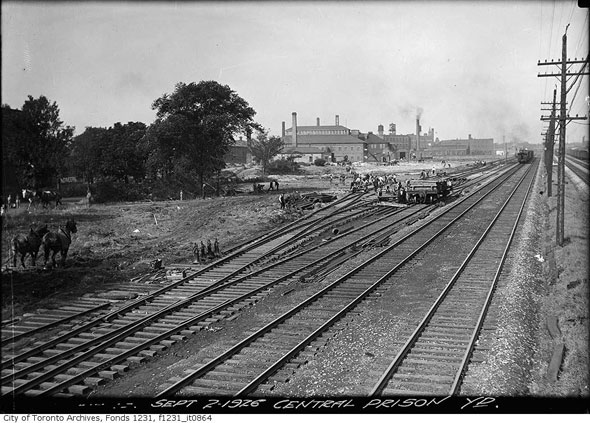 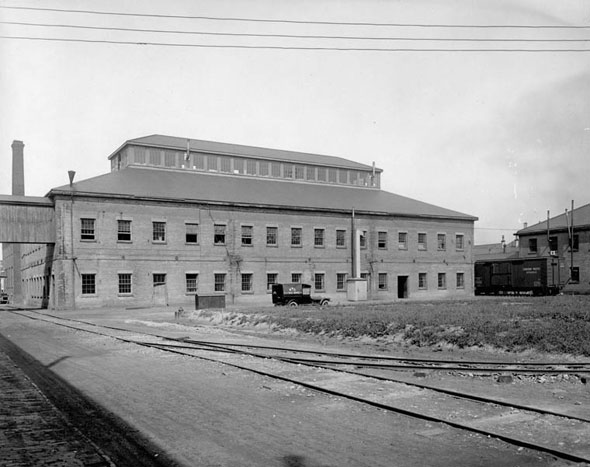 Disused warehouse on the old facility.