A brief history of buildings in Doors Open 2012

With so many historic, famous and generally interesting buildings taking down the "staff only" signs and sliding back the deadbolt for Doors Open 2012, it seems like it's worth delving into the past of a few truly exceptional buildings normally hidden from public view or seldom explored on a regular basis.

Our full preview of the event includes our top buildings to sneak a peak inside and a few suggestions based on different interests. Here we look at the history of several buildings accessible during Doors Open this year. 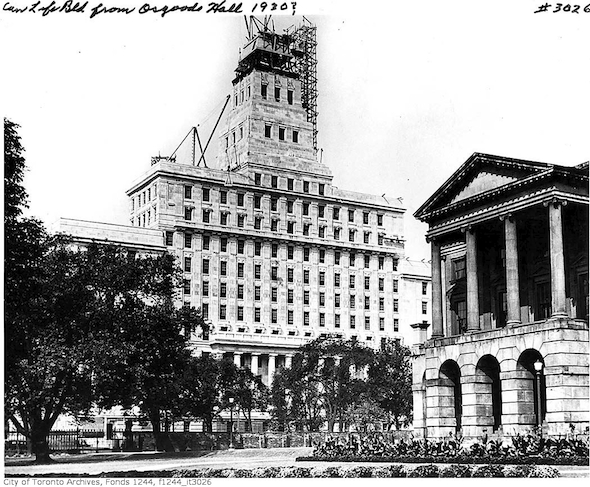 Home to the Canada Life Assurance Company since 1931, the Canada Life building provides a glimpse at what University Avenue could have been if it weren't for the effects of the great depression.

Built in a neoclassical/Beaux Arts style by Sproatt & Rolph - the architects responsible for College Park, Princess Margaret Hospital, Canada Permanent Trust Building, and involved with the Fairmont Royal York Hotel - the Canada Life Building was one of the tallest in the city on completion. Many more grand structures were planned for University Avenue but many were scrapped when the economy hit the skids in the 1920s.

The famous color-coded weather beacon wasn't added until 1951. If you've ever looked up and wondered what the system of lights and colors mean, here's the answer: If the box at the top of the tower is solid red, the weather is cloudy; if it's flashing, it's raining. White indicates snow and green clear weather.

If the yellow lights are moving up the support tower temperatures are rising, downward lights occur when the air is cooling. Steady yellow lights with no movement are displayed when the temperature is stationary. The information is updated four times a day with data from Environment Canada. 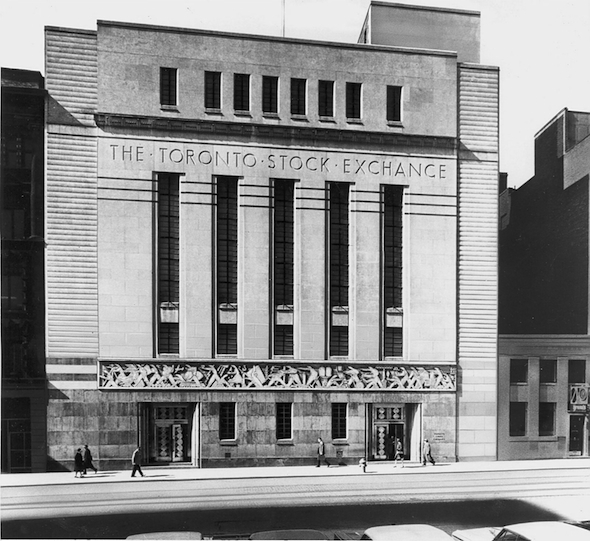 Now revitalized as the Design Exchange, the former Toronto Stock Exchange building was constructed to house the newly merged TSE and Standard Stock and Mining Exchange in 1937. A fantastic example of streamline moderne, art deco and stripped classicism architecture, architects George and Moorehouse with associate S.H. Maw produced an elegant yet sturdy looking edifice with classic art deco touches throughout.

The frieze, chiseled into the face of the building above the entranceway, was designed and carved by renowned Canadian muralist Charles Comfort. The characters are supposed to depict a vibrant and and progressive Canadian economy. Similar scenes are etched into the silver medallions closer to ground level.

Olympic & York purchased the building in 1983 and constructed the modern tower which stands above the exchange today in a deal that protected the future of the historic structure. The property was converted into the Design Exchange in 1988. 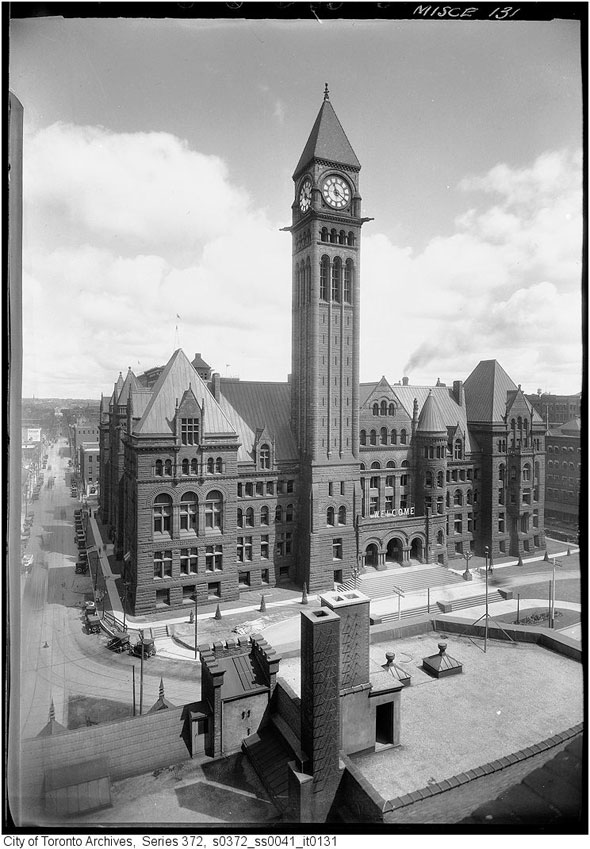 Like the Canada Life Building, Old City Hall (or just City Hall as it was then) was one of the largest buildings in the city on completion in 1899. In fact, it was once the largest civic building in all of North America for a time too. Designed by prominent architect of the time E J Lennox - who was also responsible for King Edward Hotel and Casa Loma - Old City Hall was built using Credit Valley stone in Romanesque Revival style and still includes many interesting features.

Inside the entrancehall, once called "Toronto's grandest indoor space," a vast stained glass window by Robert McCausland depicts civic progress and the construction of Toronto. Faux marble columns abound in the two-storey space.

What makes this building truly special is its little details: gargoyles, carved faces, elaborate stonework, and even custom doorknobs that bear the city's old coat of arms. In the eaves of the building, hidden from view, is the inscription "EJ LENNOX ARCHITECT AD 1898." City councillors, angry at the cost overrun of the project during construction, refused the architect a nameplate at the entrance. Lennox had his stonemasons add the signature without the knowledge of the tenants.

City council moved next door in 1965 leaving Old City Hall exposed to a demolition proposal during the construction of the Eaton Centre. Under mercifully cancelled plans, the building would have been torn down to make way for a retail centre and several high-rise office towers. It's now home to the Ontario Court of Justice. 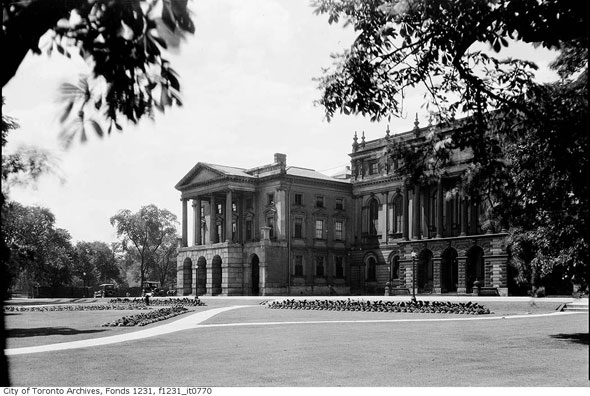 Named for William Osgoode, the first Chief Justice of Upper Canada, and home to the Ontario Court of Appeal, the Divisional Court of the Superior Court of Justice, and the Law Society of Upper Canada, Osgoode Hall is a Toronto landmark very few people have reason to ever venture inside.

When it was finished in 1832, Osgoode Hall was home to the Law Society and stood on the northwest limits of the fledgling town of York. It was commandeered between 1838 and 1843 as an army barracks and extended several times to its current appearance by 1891. The famous iron fence surrounding the building, known for its narrow gates and bars, was added in 1867. A persistent rumor says the unusually narrow space between the railings was intended to keep roaming livestock out of the gardens, though this is unlikely.

The building was designed by architects John Ewart and W. W. Baldwin in a late Palladian style. The east portico, the first to be built, was intended to act as a visual terminus for York Street much like the clock tower of Old City Hall provides a focal point up the southern portion of Bay Street.

Osgoode Hall's tiled Atrium, disused jail cells, underground tunnels and libraries are well worth a visit. If unique architecture isn't your thing, you can have your picture taken in legal robes in one of the courtrooms.