Judging by the reception of our series of historical posts about Toronto, the local appetite for vintage photos is at an all-time high. And what's not to like? As sites like Pinterest confirm the contemporary desire for visually-oriented information, vintage photographs prove themselves both an easy and satisfying way to engage with the history of one's city. Even if one's interest in, say, Toronto of the 1910s is limited, having a quick peek at a photo from the period seems to be an exercise that most are up for.

Enter the Vintage Toronto Facebook group. Started by former Toronto resident, Bill Stevenson (who now lives in Kingston), it's quickly become a popular source for quick dose of local history for its over 12,000 members/fans. Part of the reason for its popularity, I suspect, is the implementation. When an old Toronto photograph appears in my newsfeed, I'm destined to take a closer look. Also working in the group's favour is that there are a lot of photos to be seen that haven't made appearances on sites like this one. Throw in the fact that the platform makes it easy for people to add photos from their personal collections, and you have a recipe for a fascinating site.

I caught up with Stevenson via email to find out a little more about his project and why he thinks the response it's received has been so positive.

Can you tell me a little bit about yourself?

Well, let's see, I'm Bill Stevenson age 54, a former Toronto resident (1960-80) who moved to Kingston to go to Queen's and ended up staying. I actually started as a history major, as I have always found history fascinating. I own a music/gift store The Jungle, and I sell a lot of nostalgia items like records, Black Lights and posters, candy like pop rocks, T-shirts, wallets buckles of Batman, Star Wars, rolling Stones, Nintendo and other memorabilia type stuff. 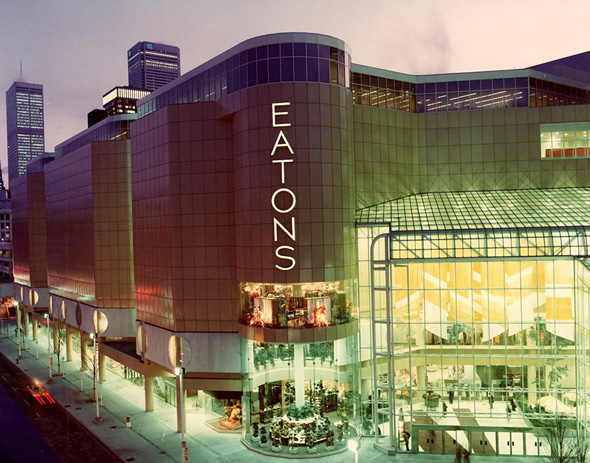 What was the inspiration for starting the Vintage Toronto Facebook page?

I belong to a Facebook group that does old ads â 50's & 60's & 70's â and in mid-January one of the other members posted about "saving" the Vintage Los Angeles Page. Many of the ads I posted to that group were Canadian and Toronto-based, and I thought that I should like the Vintage Toronto page; however I was surprised that there was not one, so I figured it was a void that needed filled.

Initially I envisioned it mostly as a pop culture Toronto type of thing, mainly the 1960's and '70s when I grew up and lived in the city, and fitting in with the items I sell at the store that everyone always goes "wow" about. During the early 70's especially I used to go down to Yonge Street and the record stores a few times a week, usually starting at Queen and working my way up. On Saturdays I would walk all the way back to where I lived near Avenue Rd and Lawrence so I got to see all of Yonge. Once I got my license I started going away from the familiar spots out to the beaches and Queen west, then during University days when I came back from Queen's I worked as a courier and got to see a lot more areas.

Anyway now that I have lived out of the city since 1980, I am always struck by the changes every time I return. So I started to chronicle the changes since I was growing up, but the I started looking deeper at buildings that were "old" when I was a youngster, so I started digging further, and I'm coming up with more photos all the time. 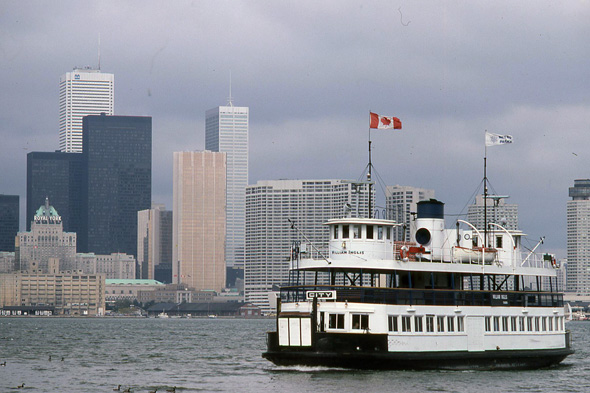 How much time do you spend on it on a weekly basis?

I have help from Bruce Marshman, who does all the "then & now" features on the page. I'm not sure exactly how much time Bruce spends, but I probably put 30-40 hours a week into it, between sourcing the photos, adding descriptions and then loading them onto the site. I try to be as accurate as possible, and if I am wrong about location and date people let me know. Car years seem to be a good indicator for many people. Bruce then takes the old photos and does the then and now albums. 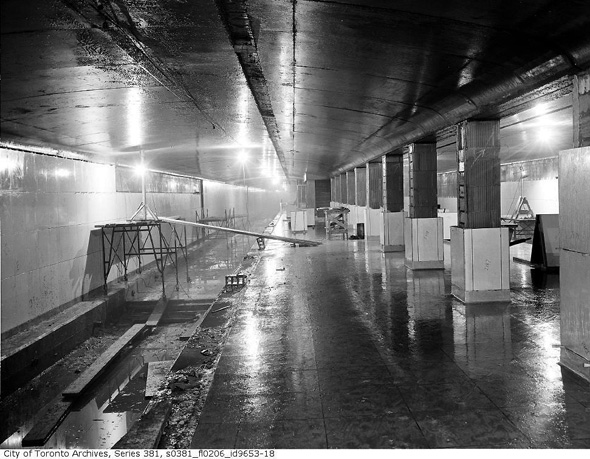 Where do you source the photographs from (aside from the Toronto Archives)?

Well the Toronto Archives are the main source, and I look at hundreds more photos than I actually save to use. I have also used newspaper archives, York U library, the Ontario Archives, the National Archives, and of course good old Google. 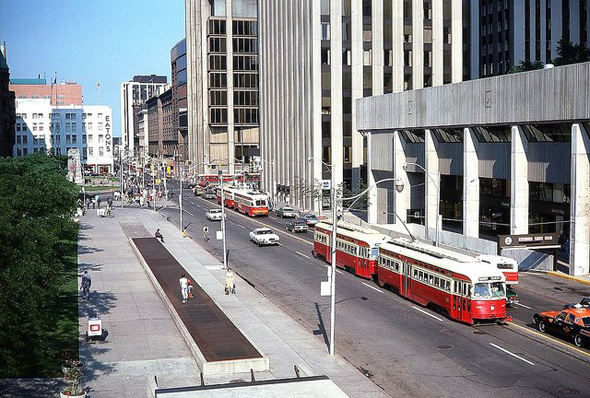 Oh many people contribute, and I hope more will do so as well. I put some of the contributions into the "time" albums, especially if they helpfully give me the year of the photo. Everyone has their own memories, and I hope more people will start going through photo albums and scanning in the photos. Often it is one that I add that triggers a person's memory, and they add a follow up which is fantastic. Bruce, who I added as a second administrator was initially a contributor of then & now photos... They are great but not really my thing. 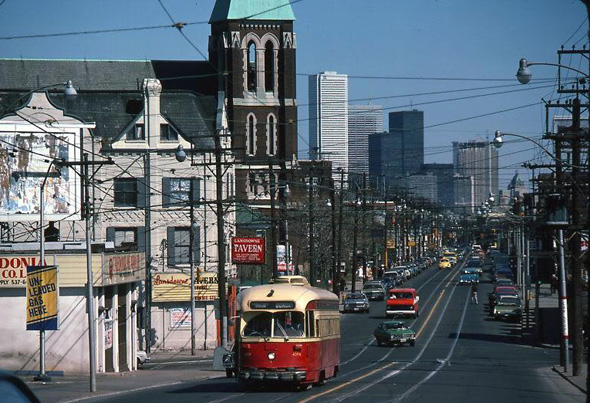 Given the positive response to the page (you've racked up 10,000 "likes" pretty quickly), do you think that Torontonians have a renewed interest in the city's history â more so, say, than 10 or 20 years ago?

Well now we are over 12,000 and growing daily. Initially I thought it would interest myself and a few of my friends. I know every time I return I am struck by the changes, and to be honest I think that there are too many old buildings being sacrificed for buildings that are utilitarian and bland. I look at the old photos and am struck by the craftsmanship of the masons and carvers, and there is no equivalent today. I think the growth of the page shows many people feel the same, and I know the comments in the then and now albums almost always communicate this sentiment as well. 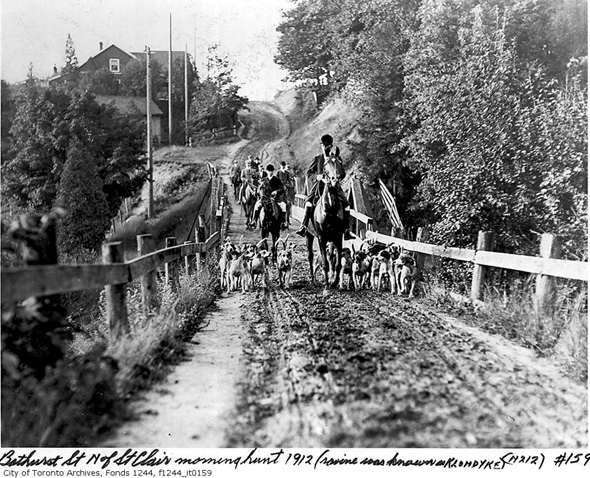 Do you have any favourite images that you'd like to draw attention to?

Well I put in a lot of photos of buildings and streets, which were best with the then and now albums, but really I prefer the shots of people at various point of time just being citizens of Toronto. A couple I really like are the morning hunt on Bathurst near St. Clair, which I think is 1912, the Don Valley when it was just farms, people swimming and riding and cows grazing, kids skipping in the streets and playing road hockey and I also like the albums of Eaton's, CNE, Toronto Island and the one called "Simpler Times" which is mostly just interesting memories of Toronto like Pop Shoppe, Friendly Giant, Popcorn vendors, Dave Keon and other nostalgia-inducing photos.

Based on the initial popularity of the project, have you thought of expanding beyond Facebook?

Well it is really just a hobby and part time for me, and with running my own retail outlet, a web site and an electronic record store I think the Facebook is enough for now.