Behind the Liberty Market Building, with zero street presence and minimal exterior signage, lies a laneway of quaint, independent retail businesses that manage to thrive remarkably in low light. Call them the 'shade-loving' boutiques of Toronto's retail scene, because they seem to subsist with little in the way of outside-of-Liberty-Village attention.

But the influx of residents seduced by the area's new condos, combined with tailored marketing schemes and heavy online presences, have allowed the shops of the Liberty Market laneway to maintain their spots and even flourish, despite the bulk of unaware passersby not even knowing that they're there.

Now, I should make clear that there might have been a tumbleweed or two rolling down the length of the path when I stopped by on a weekday afternoon. But I was quickly told that this calm was but a mere illusion.

"Yeah, it might seem quiet now," Rita Rutigliano of Barista Espresso, says to me while leaning over the bar. And indeed it did; other than a couple sipping espressos and watching a soccer game, she and I are alone in the cafe. "But trust me, it can get really busy." Rita says office workers in the area, which make up the majority of Barista's business, are constantly popping in throughout the day for a pick-me-up.

Her brother, the owner, decided to open up this cafe two years ago, rightly anticipating a Liberty Village residence boom. Barista, has, however, reached out beyond its immediate neighbours through its participation in the Indie Coffee Passport. "It has really helped get new faces in the door," Rita says. "People who wouldn't have otherwise known we were here."

That sort of two-pronged marketing approach of appealing to the locals and directly reaching out to the target market outside the Liberty Village boundary is what I hear over and over as I chat with businesses along the lane. Despite the somewhat shrouded setting, the Liberty Village locals will find you; but coax would-be customers from around the city â and you know they're out there â you need to find a way to get them to venture to Liberty Village and in through your door.

For Barista, that way has been through the Indie Passport, and for Demo Soap, which has been based out of Liberty Village for the past seven years, much of the baiting is done at trade shows. "We just finished up at the One of a Kind Show," Eric, who works at Demo, tells me as I check out the latest in Jello-inspired soap. "Trade shows are where we tend to find many of our customers, so in that way, this store ends up a place of distribution; we're not as reliant on the walk-in customers."

Of course, not everyone has experienced success in the literal shadows of the Liberty Market Building, and the occasional papered window reinforces that fact. The folks at Cadeaux , for one, admit that getting new customers in their door while lacking visibility is a constant struggle, and some businesses, such as Noir Nail Bar are experimenting with additional signage out front of the Market Building. But these shops, on the whole, seem to have found their niche, despite their spot on a street that no one seems to be talking about. 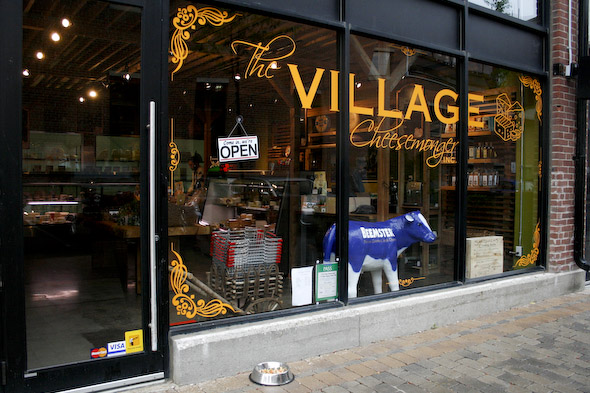