How does each Toronto transit plan stack up?

It's showdown time at City Hall today, as council convenes for a special meeting to debate the merits of Rob Ford's vision for underground transit versus the wider-reaching, primarily above-ground plan first put forward by the previous administration. In the lead up to what will surely be a closely monitored session, it's worth asking how exactly we got here. Few would have imagined that David Miller's LRT plan would be back on the agenda when Ford declared Transit City dead on his first official day in office — even if he never had the unilateral authority to do so.

It's been a tumultuous 14 months since then, but it wouldn't be a stretch to say that Ford's grip on council has slowly eroded since that time. The first definitive signs of this came with the unanimous vote against his brother Doug's plan to wrest control of the Port Lands redevelopment from Waterfront Toronto, and the trend kept up when councillors opposed to his slash and burn budget were successfully able to claw back some of the service cuts on the table for the 2012. In the wake of the budget vote, Ford claimed victory, but given his unwillingness to compromise on transit plans, it'll be impossible to do the same unless he gets exactly what he wants today (complete burial of the Eglinton Crosstown) — which is extremely unlikely. 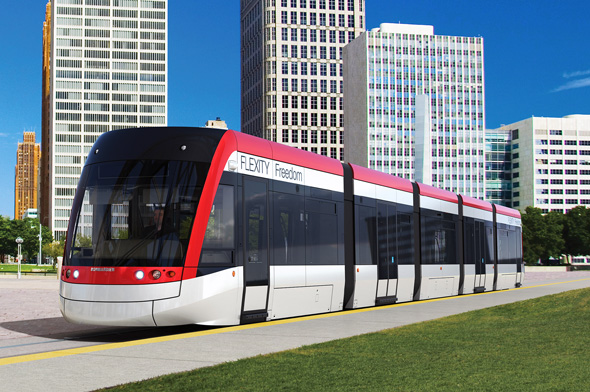 That David Miller radio appearance on Newstalk 1010 the day after the vote on the Port Lands — you know, the one in which he said that Transit City could be "turned on like switch" — seems more and more like an impeccably timed bit of political maneuvering, doesn't it? Today's meeting, however, is about more than just a return previous transit expansion plans.

In a less linear sense, one could argue that the reason Toronto is back to considering an LRT plan many thought finished a year ago is that the various players responsible for transit planning in Toronto just can't seem to get on the same page. In a rather depressing article for the Star today, Royson James tracks the various ways in which in-fighting amongst the mayor, the TTC, and Metrolinx have conspired to put the future of Toronto transit planning in the uncertain position we see today.

Above all, however, the reason that council is gathered today is that there are serious doubts as to whether Ford's plan is the best use of the $8.4 billion the province has supplied Toronto in transit funding. Note well, this isn't a debate about the relative merits of subways or LRTs, but about how to provide service for the most people with a limited amount of money. Everyone wants subways, but Toronto's transit challenges are widespread and where we build infrastructure should reflect that. 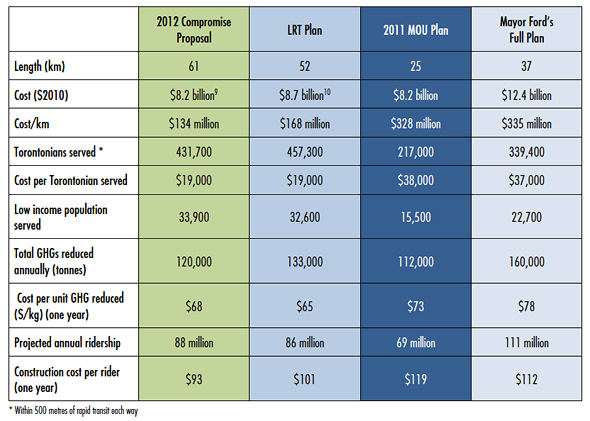 Toward that end, the Pembina Institue's recent tale-of-the-tape comparison of the various transit strategies suggested for Toronto is useful guide to what's on the table today. Amongst the statistics to be found in the chart below, one that should really stick out is the number of residents served by each plan. In a nutshell, the LRT plan formerly known as the first phase of Transit City "would bring transit to 120,000 more Torontonians than Mayor Ford's full plan (including an unfinanced Sheppard subway) at about 70% of the cost."

When one takes out the Sheppard subway extension — and, let's be honest, does anyone think this thing is actually going to be built? — the number spikes to 240,300. While there's an argument to be made about a future increase in density along a subway line, given this city's difficulty in proceeding with transit expansion since the 1970s, it's difficult to argue against the benefits promised by the more wide-ranging plan.

Anyone care to prove me wrong?