The not so fabulous history of the Roller Boat in Toronto

Of all the vessels seen throughout the port of Toronto's history, the title of most bizarre would have to go to Frederick Augustus Knapp's "roller boat." 110 feet long, 22 feet tall and shaped like a cigar, the craft emerged during a late nineteenth century craze for vessels that could cruise on the surface of the ocean. Unlike conventional ships, roller boat designs employed large floating paddles to glide the vessel over waves. Although several ships were conceived, only two were ever built; the Ernest-Bazin, named for its French designer, and Knapp's vessel.

Born in 1854 in Prescott, Ontario and educated at McGill, Knapp was a lawyer with a passion for inventions. Designed and financed in part by the daredevil William Leonard Hunt, a.k.a. The Great Farini, Knapp's vessel was basically a giant paddle passengers could ride inside. A rotating outer cylinder moved around a stationary inner cabin or cargo area, propelling the craft forward. The unique design differed greatly from others of the era and raised many eyebrows in engineering circles, especially when Knapp estimated his craft could potentially reach 200 miles per hour. The vessel became known as "Knapp's Folly" among less supportive folk who believed there was insufficient passenger and cargo space to make the boat viable. 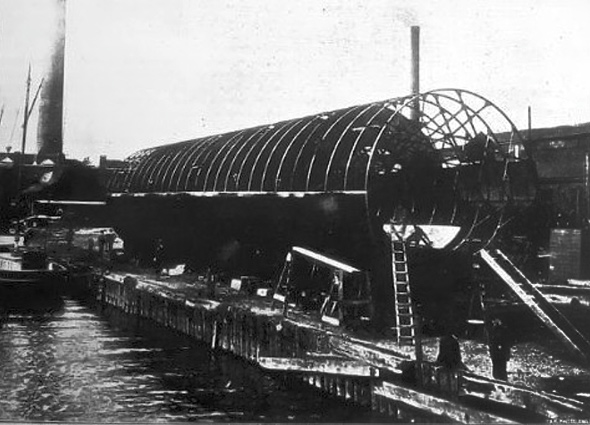 Despite the naysayers, Knapp secured the necessary funds and the ship was built at Polson Iron Works, a shipbuilding company located south of the Esplanade between Frederick and Sherbourne streets. Upon its completion, the roller boat looked like nothing else in the maritime world. Knapp expected the design to completely eliminate seasickness and cut trans-Atlantic crossing times from six days to two. It was widely known Queen Victoria got a little green around the gills on long ocean voyages and Knapp, a fervent admirer, hoped successfully transporting the monarch in his machine would land him a knighthood.

The boat was launched on September 8, 1897 and tested on Lake Ontario a few weeks later. Managing just three miles an hour on its maiden outing in front of a crowd of thousands, the vessel performed slightly better with wider paddles in April 1898. On the back of this improvement in performance, Knapp revealed plans to build a version of the vessel 800 feet long and 200 feet tall with enough room to carry 30,000 American troops to Cuba to fight the Spanish-American war. Nothing ever came of the plan. 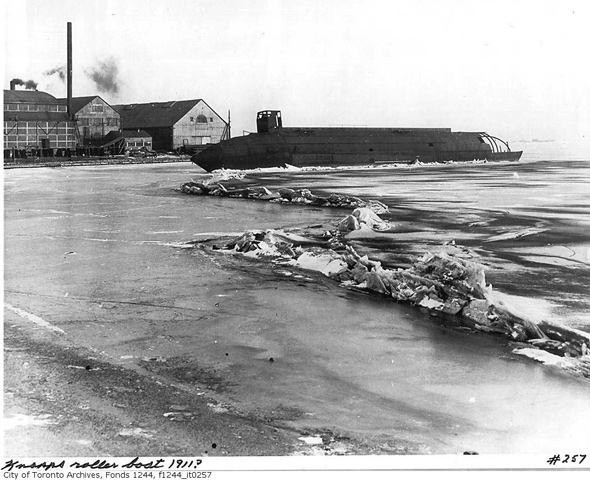 Two years later a revised version of the vessel attempted to reach Prescott, Ontario where it was to be adapted for use as a ferry between Prescott and Ogdensburg, New York. Once on the water, the steering mechanism immediately began to malfunction. At Pickering the coal supply ran low prompting Knapp and Farini to go ashore for more. Further problems around Bowmanville prompted the pair to drop anchor and abandon the journey for the night. While they slept, the anchor line snapped and the craft ran aground on the rocky shore. Hastily secured to a tree to prevent any further mishaps, tugs were summoned from Kingston to help the vessel complete its journey.

In 1901, with ferry adaptations complete, Knapp attempted to make a test crossing of the St. Lawrence between Prescott and Ogdensburg, N.Y. in a blinding snowstorm and a powerful headwind. Although successful, the boat missed the entrance to the harbour and ended up stuck in the ice, snow and soft mud at the shore and couldn't be pulled free. Knapp and the crew were rescued and the vessel temporarily abandoned. 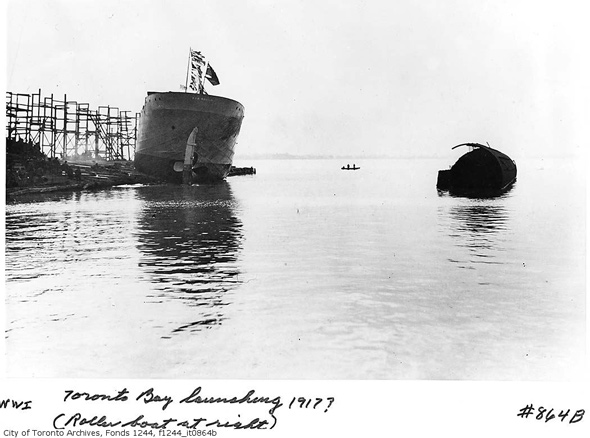 Although Knapp was confident the boat would succeed, there was more trouble in store in the years ahead. Back at Polson Iron Works in 1907 after several additional redesigns, the vessel again broke free of its moorings and struck the Turbinia, large lake boat, causing $250 of damage. The craft had to be sold to cover the cost of the repairs. Although it fetched $300, the hull was never claimed, and it lay rusting in various locations near the iron works until 1927 when it was simply buried by the shoreline extension.

The stripped out hull of Knapp's roller boat is still buried exactly where it lay on what was once Toronto's shoreline. Examinations of historical records place the wreck under Lakeshore Blvd. between Richardson and Lower Sherbourne Streets. The site straddles the road, a sidewalk and a parking lot for FedEx vans near the corner of Richardson Street. Assuming it wasn't damaged by the installation of sewers, gas lines and the construction of the Gardiner, the hull could still be in one piece, although severely compromised. There are no immediate plans for excavation but the site and much of the east waterfront remains of archaeological interest.

Writing by Chris Bateman / Photos from the Toronto Archives