A closer look at a crucial heritage site in Toronto

The plot of prime real estate covering 197 to 201 Yonge Street was, until its recent purchase by MOD Developments, owned by Montreal jeans kingpin Sal Parasuco who planned to put a hotel on the site. Abandoned for a quarter century, the Bank of Commerce building, has been an unfortunate reminder of how neglectful this city can be to its most important historical structures.

But now plans are taking shape for the land located directly opposite the Eaton Centre to host a 60-storey condo development which would retain (and restore) the Toronto landmark. Before any construction gets the official go ahead, let's take a look in the rear view mirror and find out why this building and its neighbour to the north are so important and how they ended up abandoned in the first place.

The long-vacant bank at 197 Yonge Street was built in 1905 for the Canadian Bank of Commerce, the same year that its companion, the Bank of Toronto went up. Separate architects were responsible for the design of each building, but both feature a neo-classical style that includes Corinthian columns and ornate detailing. 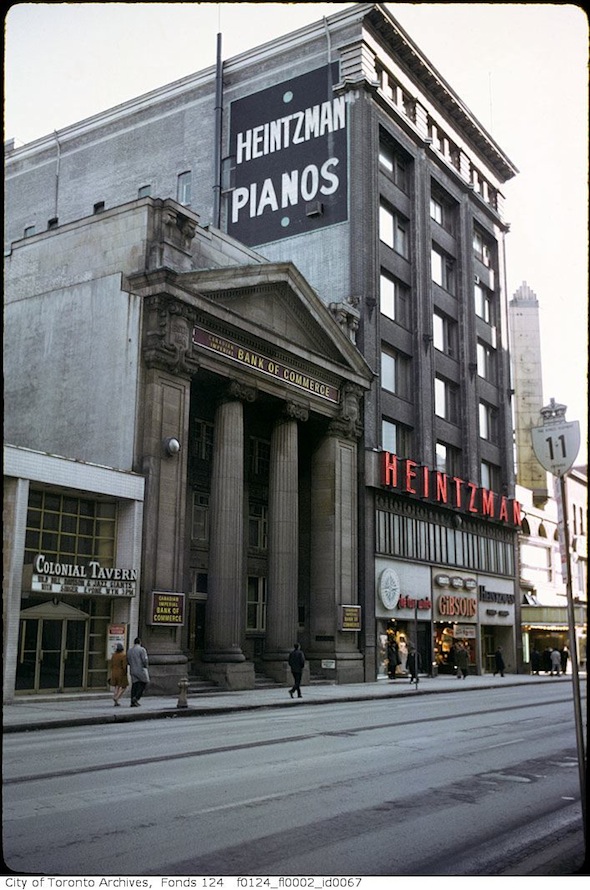 Next door, the four-storey Bank of Toronto at 205 Yonge Street, which isn't included in the purchase by MOD developments, was designed by prominent architect E. J. Lennox, also of Old City Hall and Casa Loma, in a similar style to its neighbour. Also four-storeys, the building is most noticeably different thanks to its domed roof. The building was last used by Toronto Historical Board in1996 when the group was reconfigured into Heritage Toronto. Our own Jonathan Castellino explored its interior in 2009. 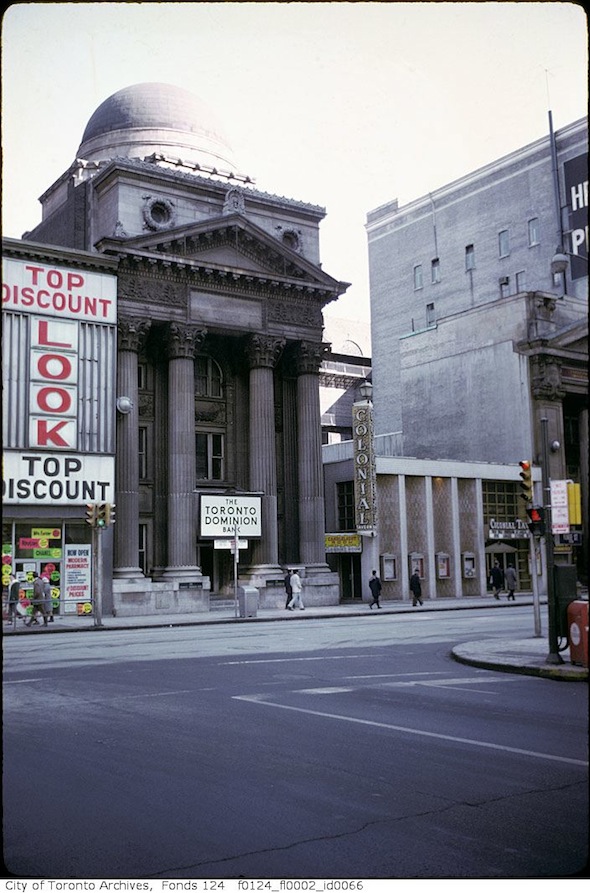 The land between the banks was famous in recent times as the site of the Colonial Tavern, a legendary jazz and blues venue that hosted concerts by Dizzy Gillespie, Art Blakey, Rahsaan Roland Kirk, Muddy Waters, Rush and many other popular musicians. Before the tavern, the site belonged to Scholes Hotel, a popular venue that included a lunchroom serving drinks and refreshments.

After the Colonial Tavern's demolition the site was repurposed into the tree-shaded parkette currently between the abandoned bank buildings. If MOD Development's plans get the go-ahead the park will form the base of the 60-storey condo tower while the land on Victoria Street will be donated to Massey Hall. The plans call for the restoration of the Canadian Bank of Commerce, but the future of its neighbour still remains up in the air. 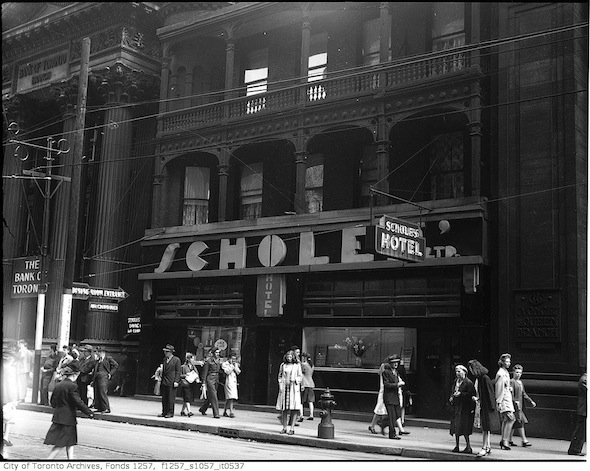 It's worth noting that nothing has been finalised yet — the Massey Tower project does not have planning approval and the current he zoning laws limit structures on the site to 15 storeys — so any plans could be subject to change. Still, this recent development might be the way of the future of heritage restoration in Toronto. Nothing comes for free, but a 60 storey condo tower might well be worth it if it means that the Bank of Commerce building is saved. 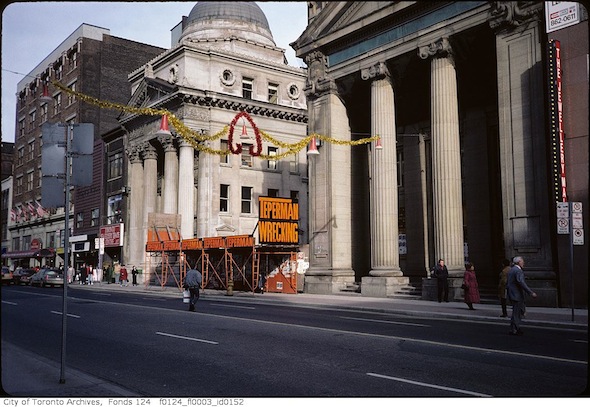 Demolition of the Colonial Tavern 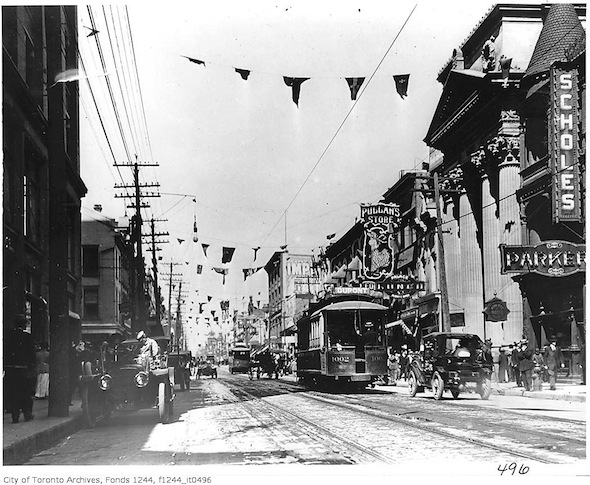 The view up Yonge Street

Architectural plan for the Bank of Toronto 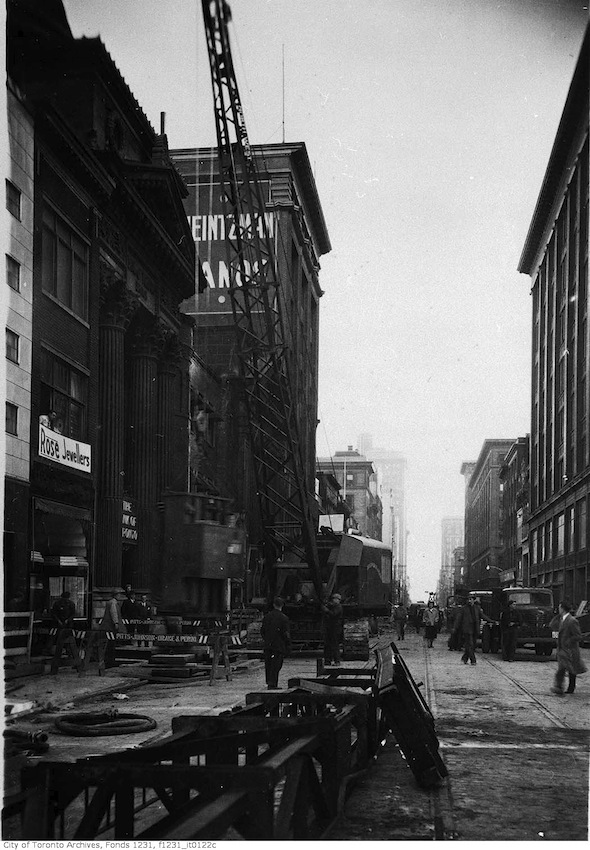 Subway construction outside the banks (Canadian Bank of Commerce obscured by the crane).

Pictures from the Toronto Archives except the Bank of Toronto architectural plan from the Archives of Ontario.