Get to know a street: the Village of Islington

The Village of Islington offers a glimpse back in time. Not in the untouched Galleria Mall sort of way, but through its breathtaking murals painted on Dundas building walls, which offer a nostalgic look back at the area during a past time.

There's the "Portraits from the Past" mural, inspired by old area photos of local business people, "Timeline: Islington Then and Now," which shows Dundas Street at three stages of its history, and "Gordon's Dairy"--my personal favourite--a mural that depicts horse-drawn milk wagons as they once appeared on Islington streets.

While it's not exactly cobblers and milkmen on this area of Dundas West nowadays, the Village of Islington still maintains some of that vintage, old-world charm with its hanging planters, varied architecture, and tight-knit community feel. When not admiring the outdoor artwork, here are some places to check out in the Village of Islington.

Cho Dang Soon ToFu
Korean restaurants are surprisingly plentiful in these parts but the best of the bunch is this casual eatery famous for its homemade silken tofu that's the winning ingredient in its stews and stone bowls. And who can resist the free and plentiful ban chan. 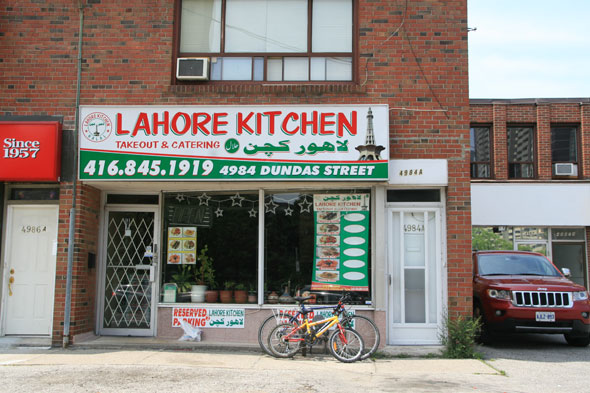 Lahore Kitchen
Lahore Kitchen offers Pakistani cuisine in a super-casual environment. Yes, plastic chairs, a standing fan, and a little TV in the corner. Still, what it lacks in dĂŠcor Lahore Kitchen seems to make up in reputation, serving really well-priced Halal dishes including Biryani, Chicken Tikka, and Lahori Chana and Lahori Fish. 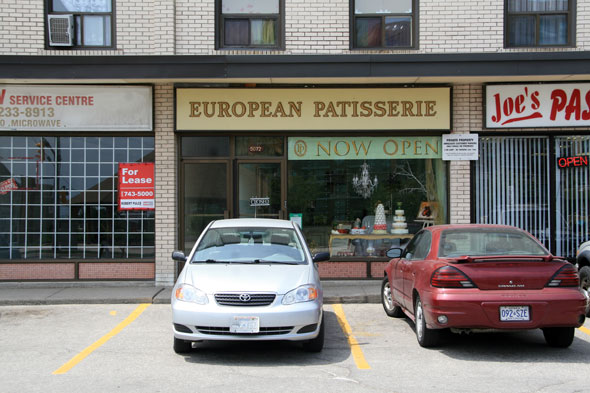 European Patisserie
European Patisserie looks every bit as sweet as the treats behind its counter. Painted a light mint green with a standing macaron tower in the window, European Patisserie offers a whole array of delicate European (shocker) pastries, cakes, and small finger foods including Zuppa, Strudel, Baklava, and mini quiches. The family-owned patisserie also specializes in 3D cakes.

Shamrock and Thistle
White the Fox and Fiddle just down the road seems to garner a lot of the pub-focused attention, Shamrock and Thistle still holds its own with a kind of classic pub feel. It's not exactly a glamorous spot, and the exterior sign is certainly in need of some love, but the Shamrock and Thistle manages to consistently draw in customers for live music and televised sporting events. Classic pub food, and typical bar atmosphere.

John's Fish and Chips
If you're travelling west on Dundas, you can't miss John's sign. The fish and chips joint is painted a nautical blue and white inside and decorated with wall-mounted pot lights and lanterns filled with seashells. Just in case you didn't get the idea. John's offers Halibut, Sole, Haddock and more, including a few Greek foods including homemade Tzatziki and feta cheese served with olive oil and oregano.

Anatolia
Widely regarded as the best Turkish restaurant in Toronto, Anatolia is a true destination for its classic phyllo rolled cigars, lamb skewers and pistachio baklava. And don't forget their delicious hummus, ranked tops in the city. 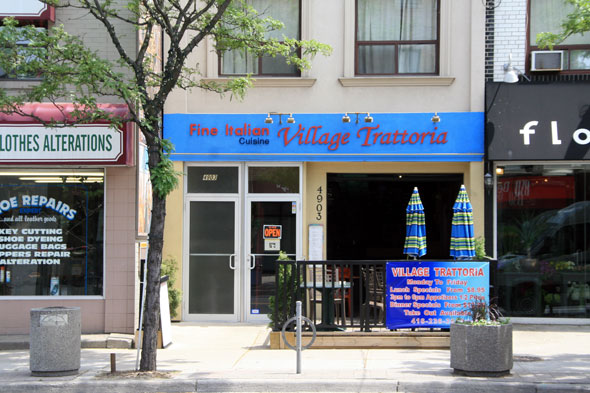 Village Trattoria
Cozy, casual, and distinctly Italian, Village Trattoria is certainly the Village of Islington spot for authentic Veal Rigatoni, Shrimp Linguini, and Potato Gnocci. There are a few outside tables for patrons lucky enough to snag a spot, as well as many lunch specials starting at $8.95.