Generally speaking, when cycling infrastructure is discussed in Toronto, the talk is of bike lanes. Similarly, on the rare occasion that pedestrians are thought important enough to warrant real discussion of how to enrich the experience of walking in the city, one tends to hear about the desire to create more pedestrian-only zones downtown. The woonerf, on the other hand, seems a concept only taken seriously by urban space experts and those who've recently returned from trips to the Netherlands, where you'll find numerous examples of these shared roadways.

There's a host of reasons for this, one of which I suspect is that it can be difficult to imagine what one would actually look like in Toronto. For my part, I think a street like Augusta Avenue sometimes unofficially acts as a sort of woonerf, but that still leaves me wondering what a street that more vehicular traffic to begin with might look like. Or at least it did until the folks over at dandyhorse magazine shared a snippet from their soon-to-be-released new issue, in which, with the help of &Co Architects, they imagine what the stretch of Bloor around Honest Ed's might look like if converted into a woonerf.

Note the left curb has been reduced, the street narrowed and that seating has been added to the wider sidewalk areas. Despite the desire of the Annex Residents Association to improve cycling infrastructure in the area, one has to be skeptical that a design like this would ever be implemented in this particular location. Nevertheless, at a very minimum, the rendering should serve as a conversation starter. What do you think? Could Toronto use a woonerf or two? Where would you put one? 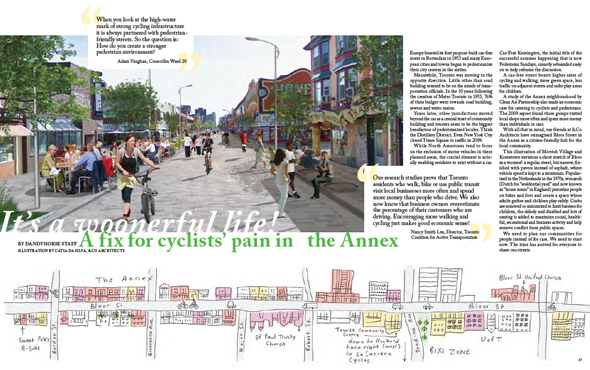 More imaginings of a cyclist-friendly Toronto can be found in the upcoming issue of dandyhorse magazine, which is being launched tonight at the Gladstone Hotel.