The 2010 CNE gets underway today, promising to offer a couple weeks of entertainment and good eats before the summer unofficially to comes to a close after Labour Day weekend. The largest fair of its kind in Canada, what the Ex has lost in carny appeal, it's more than made up for in cleanliness and culinary offerings.

My ideal experience at the annual fair involves a trip down the 511 streetcar from Bathurst Station (the nostalgia makes the slow speed bearable) in the late afternoon, pigging out on a wide variety of food served on sticks for dinner, followed by a long, slow tour of the midway shortly after sunset. But for those looking to do more than just the midway and food building, there's also a variety of exhibitions and events worth checking out.

Some highlights of the 2010 Exhibition

Fans of extreme sports will want to check out the Globe of Death and the Vertigo Virtuosos, which respectively feature motorcyclists performing stunts in a spherical cage and daredevils working some aerial magic with 80-foot poles. Location: Princes' Blvd. Show Times are 11:30 am, 2:30 & 5:30 pm, with additional shows at 8:30 pm Fridays - Sundays.

Less impressed by such physical feats? ARTrageous is a live painting show set to music in which the artists transform blank canvases into full-blown artworks at breakneck speed. The pieces may be a bit on the corny side, but watching them go up so fast is still rather remarkable. Location: Variety Stage (just west of the Food Building). Show Times are 12 pm & 3 pm, with an additional 7 pm show on September 4th & 5th.

Cheryl-Ann Webster's Beautiful Women Project features 120 clay sculptures cast from real women's torsos (from the neck to the bikini line). The models, who range in age from 19-91 are meant to represent (ad celebrate) natural beauty and the diversity of the female form. Location: Arts, Crafts & Hobbies Pavilion. Open 10 am to 10 pm daily with artist in attendance on Fridays, Saturdays & Sundays at 11 am. 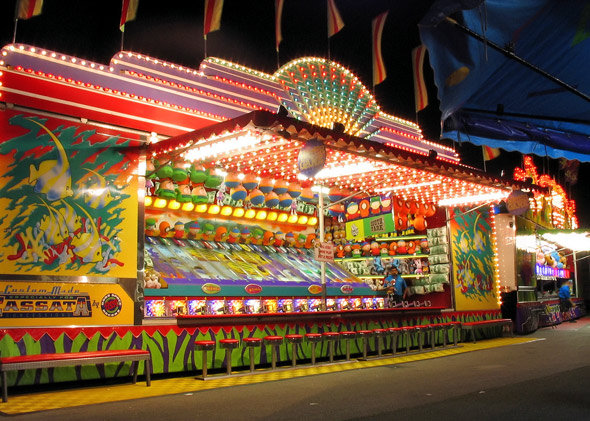 Love, Longing & Lust somewhat self-indulgently examines the role that the CNE has played in bring couples together since its inception in 1879. There will be some cool historical artifacts on display, but the highlight will surely be the chance to check out people doing the speed dating thing on the Courtyard Stage. The next great spectator sport! Not into being voyeuristic and cruel? There's always sand sculptures (in the same building). Location: Heritage Court, Direct Energy Centre. Open daily from 10 am to 10 pm.

The 2010 Nighttime Show is MANA: Cirque Fantaisiste which underscores just how far the shows have come from the early days on the midway. Although there will still be some contortionists, this looks like big-budget stuff far distanced from the freak shows of the past. Location: Princes' Boulevard in front of the Allstream. Show times are TBA, so visit the website for more info. 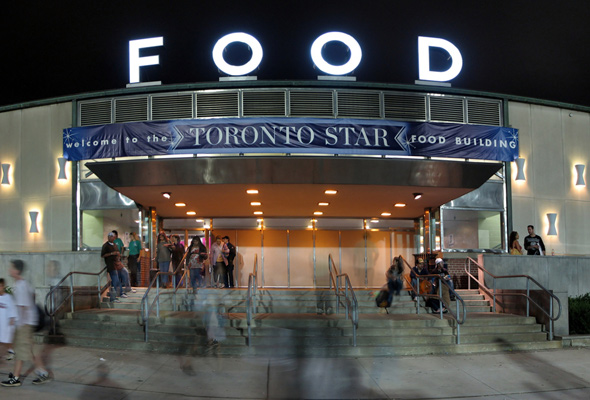 One bit of food news that's caused a stir in the last couple of days is the deep fried butter balls that Sweet Treats concession stand has dreamed up for this year's Ex (last year it was chocolate covered bacon). But, with over 100 food vendors, there's loads of other options to get excited about.

Running everyday of the CNE expect August 23 and 30, Ribfest will treat lovers of barbecue to a wide variety of this carnivorous treat. And there's beer (the venue is fully licensed)! Location: Bandshell Park.

A number of celebrity chefs will be doing demonstrations throughout the CNE. Highlights include Lynn Crawford, Massimo Capra, Anthony Rose and a few others who are probably a little less talented than they think they are. Location: Home Pavilion, Hall A in the Direct Energy Centre. For information on specific chefs, check the website. 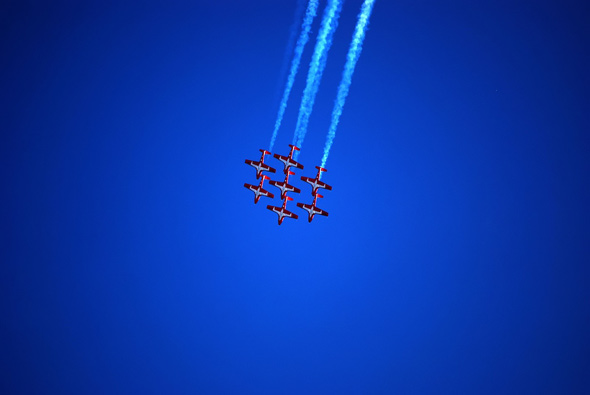 The 61st edition of the Air Show celebrates the 40th anniversary of the Snowbirds. For me, the sounds of the jets shooting above Toronto's skies is the final nail in the coffin of summer. Last year was the first time that I've actually watched the show from the waterfront, and I have to say it's pretty spectacular at times. Of course, the enjoyment factor is determined very much by one's location and sight-lines. Aeronautical nuts might consider a VIP ticket (which guarantees the best views), but at $150+ most will do just fine arriving a bit early on their day of choice to scout a good (and free) location. Takes place on September 4,5 and 6 at 12:30 pm.

There's lots of other stuff going on, including daily concerts at the various venues on the CNE grounds. Some of the music looks promising, and some looks -- how best to put this -- more family oriented. To avoid sounding like more of a snob than I've already managed, here's a link to the music listings at the Ex. They're not that extensive, so choosing what sounds worthy should be easy.

For additional information take a look at the 2010 website.