BIXI bikes made their official Toronto debut last night at the public subscription launch party at the Gladstone Hotel. Hundreds of people came out in support of what could be the first large scale bicycle-sharing program in this city, should BIXI meet its subscription and sponsorship targets by the end of November. Many partygoers were avid cyclists and cycling advocates, others stopped by to take the bikes out for a test ride around the block, and some were like me: pedestrians with a renewed interest in cycling, lured by the accessibility and flexibility that BIXI can provide, with none of the ownership. 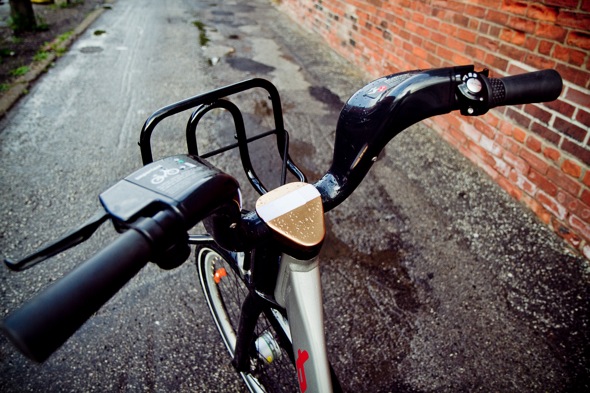 My BIXI bike and I got off to a shaky start, which is a testament to how long it's been since I've mounted one of these things and not to the build quality of the bike itself, which I admit is rather sturdy. I bungee-strapped my bag onto the front rack, adjusted the seat to my desired (and very short) height and once I pushed off the curb, it all came back to me - just like... riding a bicycle. For someone who isn't familiar with the ins and outs of cycling, I can attest to how well the bike handled on the flooded potholes of Gladstone Avenue. My particular model had three gears (some have six) and they all seemed fine, though I would later hear them being described by another test rider as being a 'little low' - something which is most likely a personal preference than a flaw. 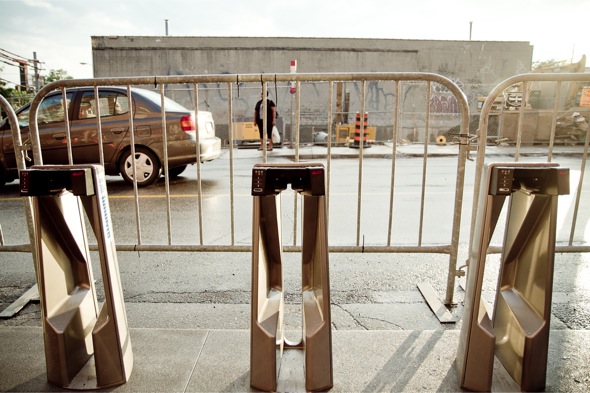 Designed in Montreal and built in Chicoutimi, BIXI bikes are intended to be the ultimate commuter bike, adaptable to a wide range of body types, terrains, and all sorts of weather conditions. If Toronto's mild winters persist, year-round BIXI-ing could very well become a reality. The tires, while smooth, are built to tread on snow and, to some degree, icy roads. The enclosed mechanics and thick frame give it some heft and durability without feeling too clunky. It's about as polished as anything with a propensity for being used and abused can possibly be. 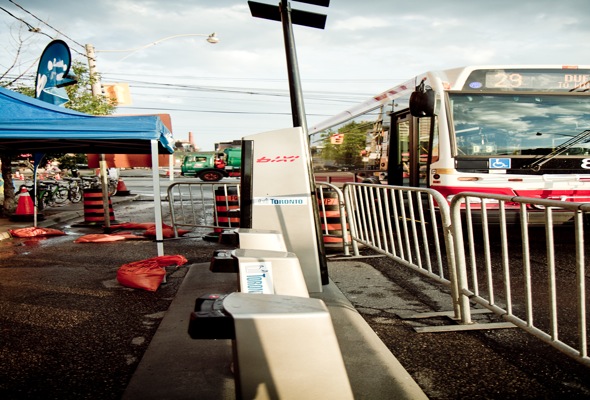 Based on my observation of those arriving to the party on their own bikes, decked out in full riding gear, I was compelled to find out if joining a bike-sharing program would seem a bit redundant. Surprisingly (or not), cyclists are among some of BIXI's first subscribers. Daniel Egan, Manager of Cycling Infrastructure and Programs at the City of Toronto summed BIXI up as "an extension of transit more than a bike-sharing system." This way, cyclists who wish to pedal around downtown but don't want to lug their bikes on the subway can now enjoy the best of both worlds.

Yvonne Bambrick, Director of Communications and Events with Toronto Cyclists Union, agrees with the notion of a more flexible approach to transportation, citing the resounding success of similar programs in Montreal, Paris and soon, London. At the very hub of the BIXI launch is a collaborative push for cycling as a fair and mainstream mode of transit. For all of its discordant views on transit and transportation in general, perhaps our fair city is more than ready to re-define our roads, share our streets, and change the way we get around. 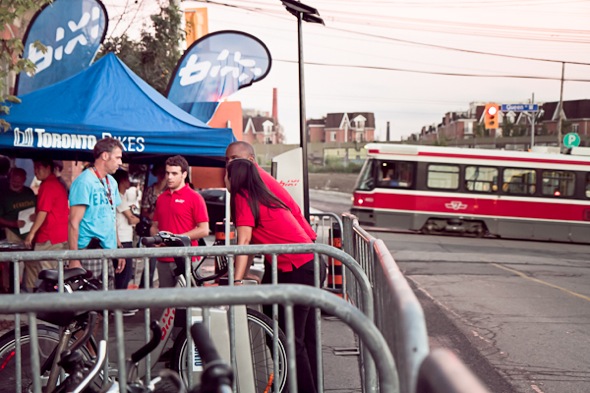 For more information on the BIXI bike-sharing program, see the Q&A fact sheet on the Toronto Cyclists' Union info page.