The history of the Central Reference Library in Toronto

Many U of T students visit the Koffler Student Services Centre and may not know the building was once Toronto's Central Reference Library.

Located at 214 College St., the building is home to a sizable bookstore, which inhabits the entire two floors of the former reference library.

As a focal point for the numerous services available to students (from electronic gadgets to psychiatric counseling, all under one roof) and with many people constantly entering and leaving the building, it tends to be quite lively, and not as tranquil as this former library was most likely intended to be when it first opened on Sept. 8, 1909. 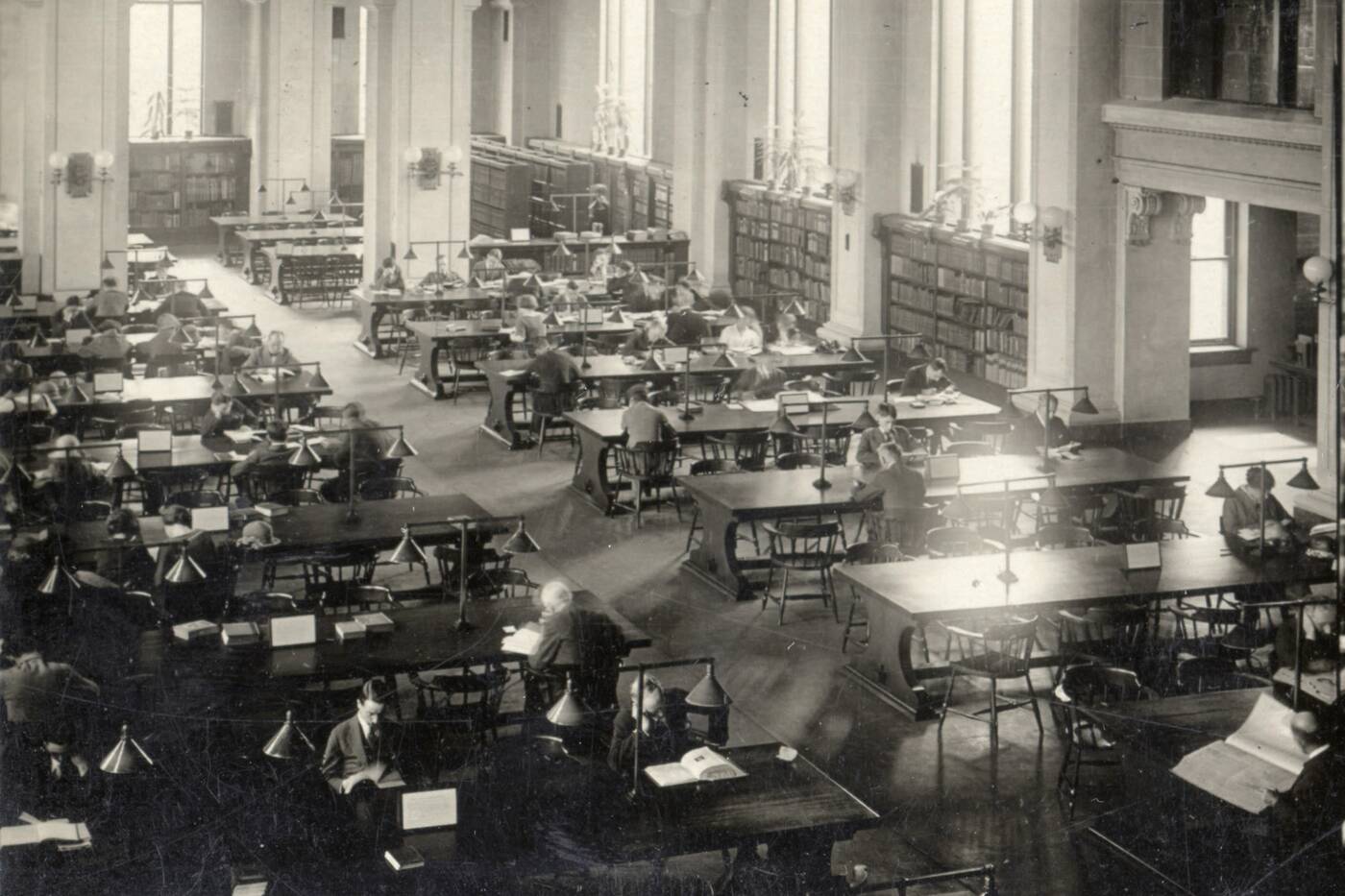 The funding for the erection of the building was provided by Andrew Carnegie, who donated $350,000 toward the Central Library and three branch libraries.

Carnegie was a retired American industrialist and entrepreneur, who derived most of his money from the steel industry and spent his remaining years as a philanthropist. 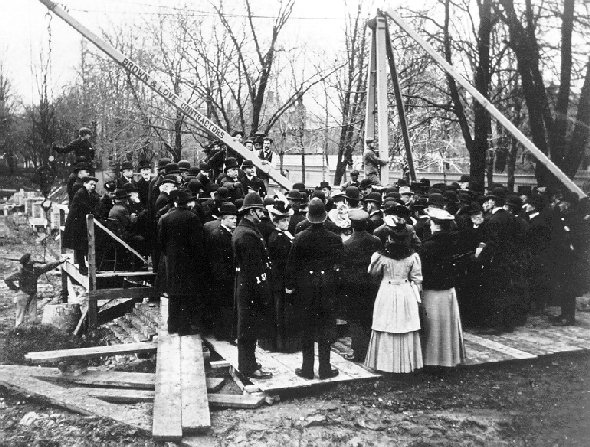 The cornerstone was laid on Nov. 27, 1906 by the Chief Justice and Chairman of the Toronto Public Library Board William G. Falconbridge, and a small group of Toronto elite attended the ceremony.

The new library was designed in Beaux-Arts style by the architectural firm of Wickson and Gregg, who collaborated with Alfred H. Chapman of the Chapman and Oxley partnership. 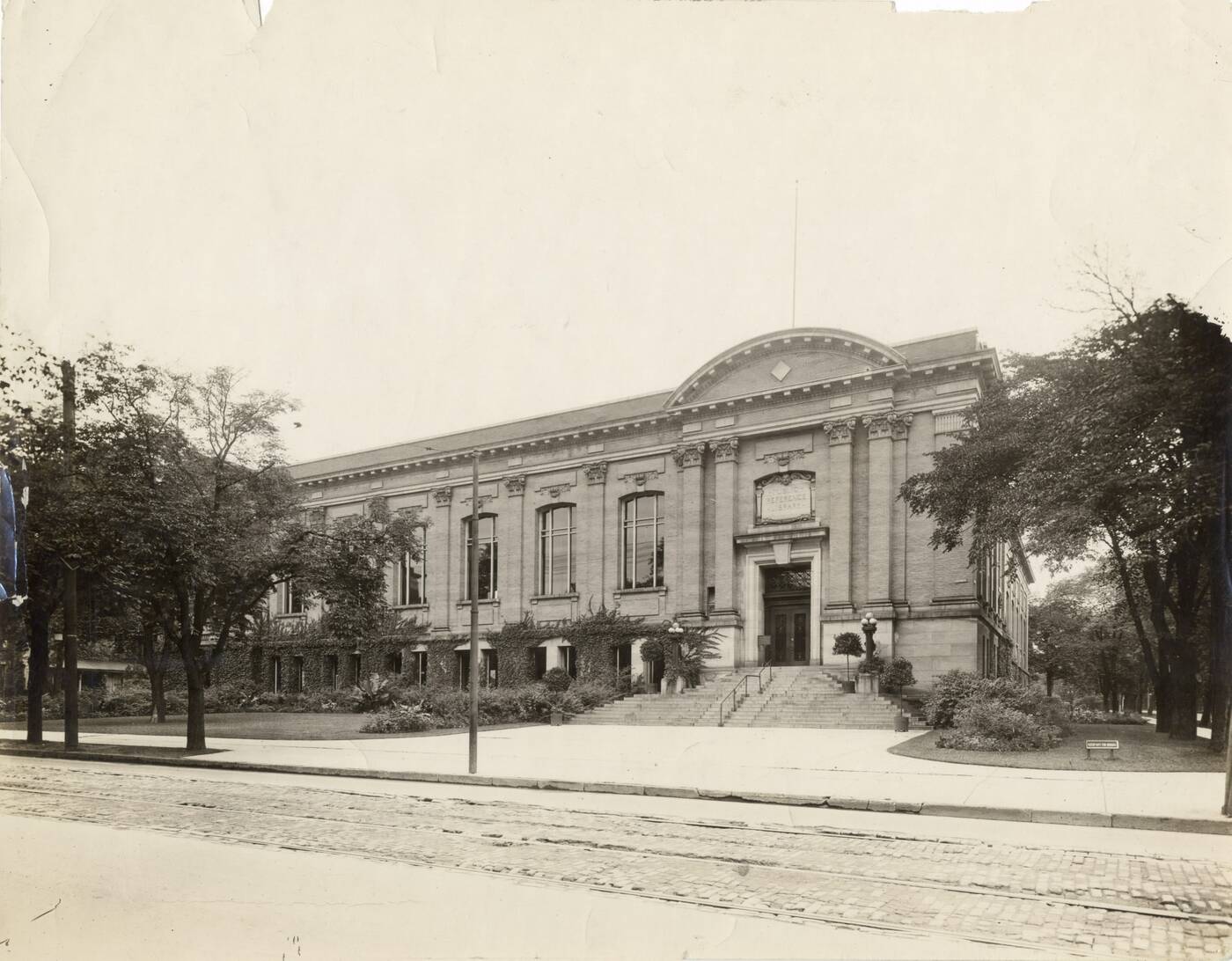 Architectural historian Patricia McHugh described the library as "one of the best Second Classical Revival buildings in Toronto, rich in sculptural stone ornament but poised and firm with graceful large windows set deep into smooth yellow-brick walls and a gradually stepped approach to dignify the entrance." 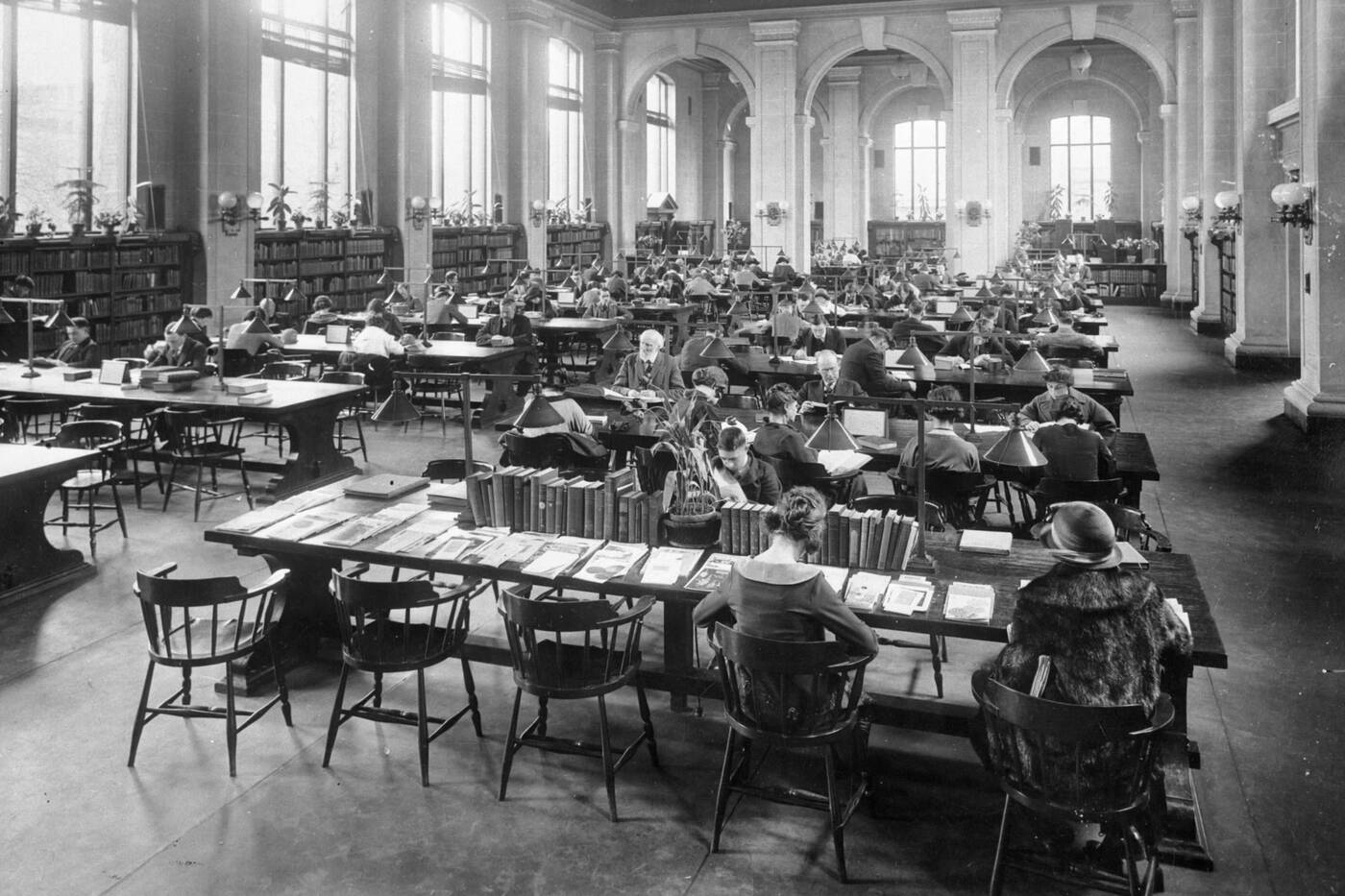 Examples of works of both groups of architects could be seen throughout Toronto: in 1914, W & G were hired to provide plans for the Timothy Eaton Memorial Church on St. Clair Avenue East, while C & O designed several historical landmarks, including the Sunnyside Beach Pavilion and the Princes' Gates at the Canadian National Exhibition.

In the late 1920s, the firms worked together in order to devise a plan for an addition to the library, and a new Circulating Library was opened April 21, 1930. 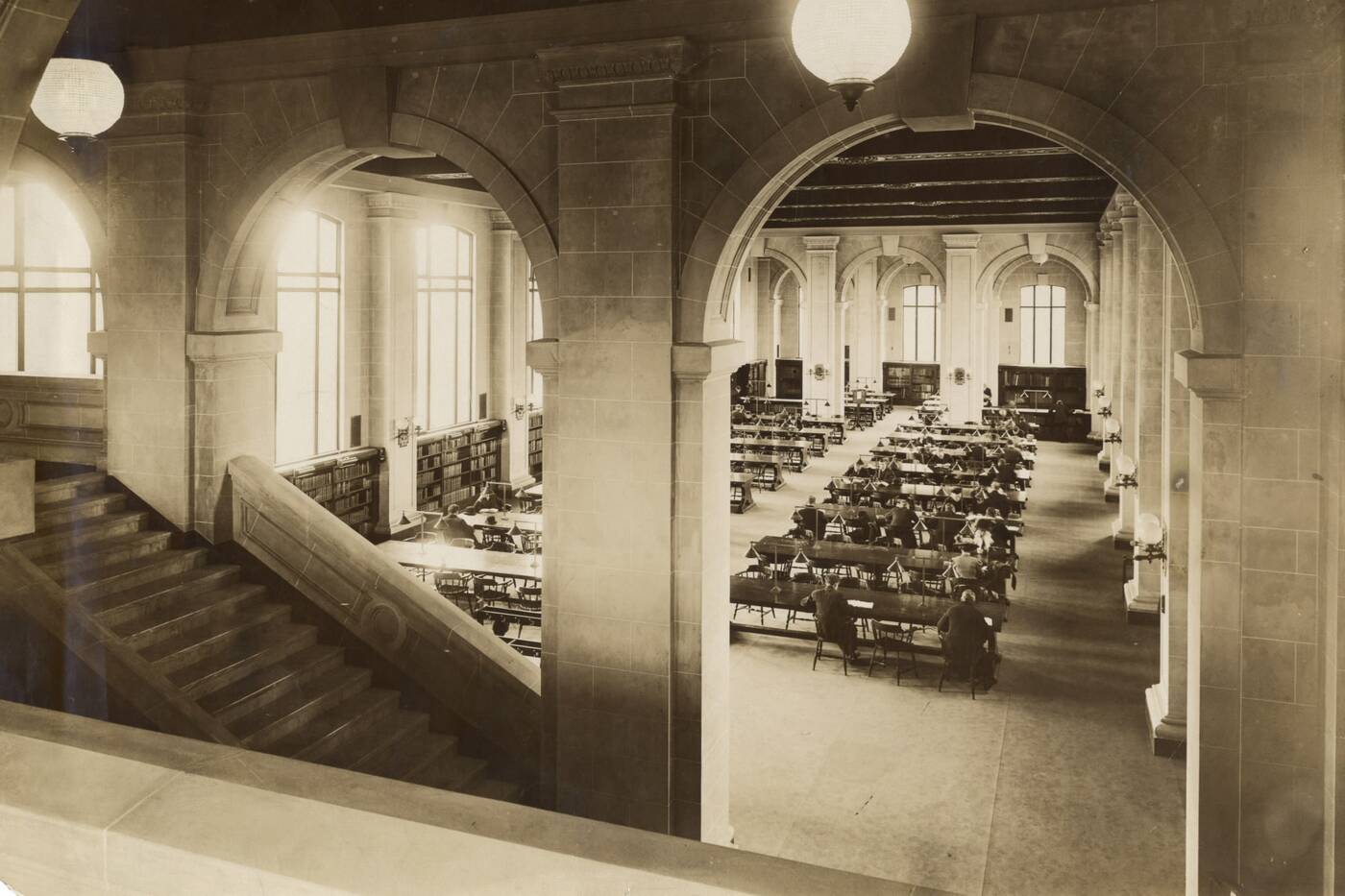 The new collection meant that the patrons were allowed borrowing privileges of the materials, whereas before they were only able to consult them in the Reference Reading Room on the second floor.

On June 20, 1973, the municipal government recognized the structure as a heritage property, and it secured protection under the Ontario Heritage Act two years later.

In 1977, the building was acquired by the nearby university and adopted as a student centre, named after Murray Koffler, the founder of Shoppers Drug Mart and a university benefactor. 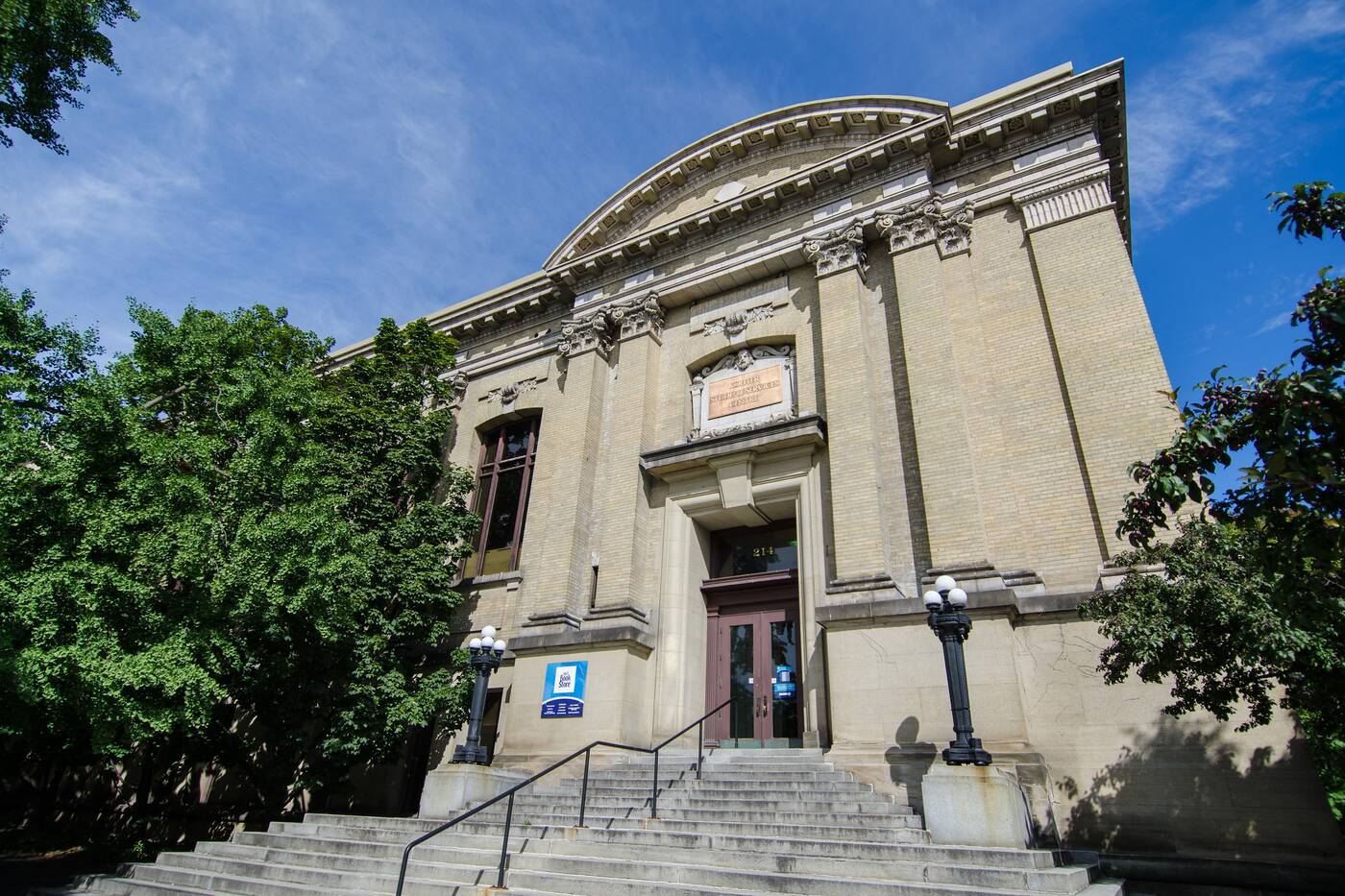 Koffler Student Centre is part of U of T today. Jeff Hitchcock photo.

The central library closed on July 23, 1977 and opened a new location later that year on Yonge Street, just north of Bloor.

In 1985, Chapman's son, Howard, along with another architect, Howard V. Walker, developed a plan for the complete restoration of the building, which McHugh praised as a "sympathetic update," that kept in tune with the original style of the building.