The Trump Hotel and Tower

You'd be forgiven for thinking the Trump International Hotel & Tower had been built already, or had been canceled outright. First announced by Donald Trump in 2001, the building at Bay and Adelaide is finally set to be completed this year. However, with about forty more stories to go, and at a pace of roughly 6 days per floor, it will likely be somewhere around the tenth anniversary of Trump's first announcement that we'll see the building fully completed. 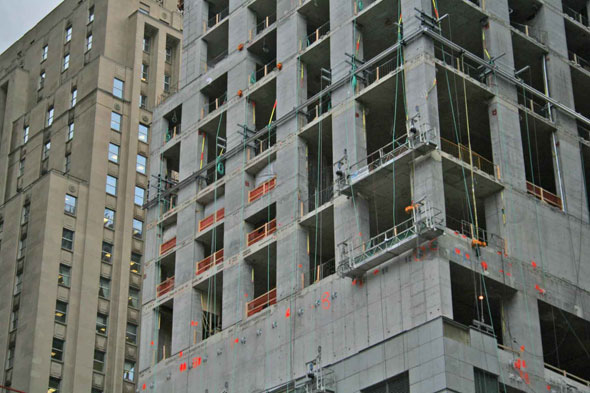 In those ten years, there have been plenty of speed bumps. Donald Trump was initially set to partner with the Ritz-Carlton Hotel Company among others, but that deal fell through when the Toronto Star reported that one of the developers in the partnership had embezzled funds. The Ritz-Carlton Hotel Company eventually decided to go it alone (their skyscraper is currently nearing completion on Wellington Avenue), and Trump relaunched his project in 2004. His Canadian partner in this project is Canada's youngest billionaire, Alex Shnaider. 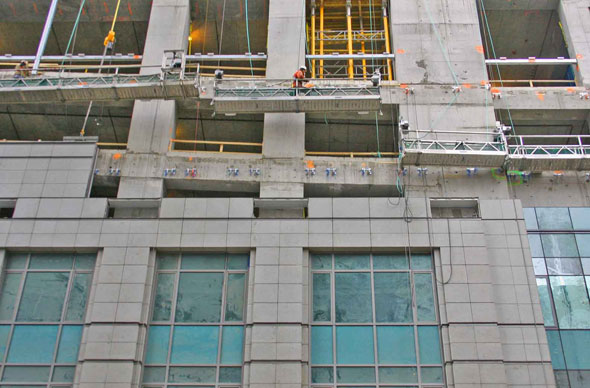 Originally 68 stories, the Trump Tower's enormous height encouraged local developer Harry Stinson to start some rivalry over who could build the tallest residential tower in Canada. Over a period of a few months, both towers kept revising their heights upward. Stinson, however, was fated to lose this match: his Sapphire Tower project was rejected by City Council because it would have overshadowed Nathan Phillips Square. Stinson's project eventually had to be cancelled when he didn't pay his bills to David Mirvish.

Meanwhile, by 2007, Trump Toronto still had not broken ground. Without Stinson to compete with, the project dropped several floors and downgraded the size of their units to help improve sales. Shnaider now admits that concern about the project's future was a problem. "The hotel part of the sales was always doing well," he said. "Residential sales were a problem. A lot of buyers were buying for themselves, usually people working on Bay St. and, because of the skepticism, when they didn't know a date they are quite reluctant. This is especially true for the larger, more expensive units because you have talk on the street that it won't be built." 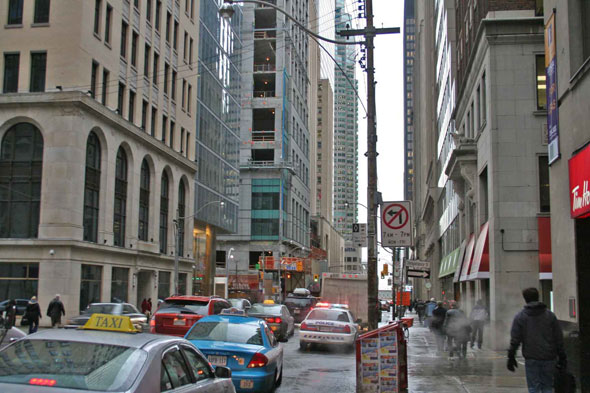 Ground was finally broken in late 2007, but the challenges remained. Even building the tower is more complicated than what is required for a regular tower. The building has a tiny footprint: it is only 15,000 square feet, which can hamper construction. It is crammed into an already dense area. The construction crane for the Trump Tower has only 45 cm clearance when it needs to swing past the Bay-Adelaide Centre across the street. The building's density also means that there are several floors of parking above ground. The Zeidler Partnership Architects-designed structure will hide behind a stone and glass facade that mimics the bank buildings around it. The parking spaces are so tight that residents of the building will not be allowed to park their own cars. Instead, valets will take them up a steeply inclined ramp to put them in "bunk beds for cars" - two storey car storage units. 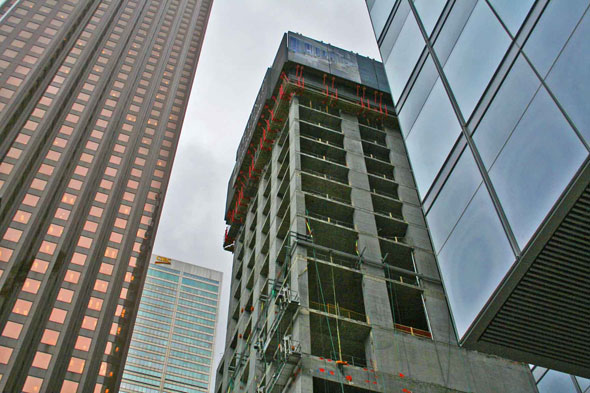 But it's the height we'll all notice: when completed, the Trump Tower`s roof will sit at an estimated 257 metres, slightly higher than Commerce Court West. It will be noticeable in almost any part of the city that First Canadian Place can be seen. Although it might not have seemed likely at many times over the last ten years, the Trump Tower will soon have a major impact on Toronto's skyline.