Adam Giambrone will announce next week he's running for Mayor of Toronto. In a note sent to supporters earlier today, the current City Councilor for Ward 18 and Chair of the TTC outlined next Monday February 1st as the date he will throw his hat into the ring during a celebration at Revival. Although the invitation (pictured below) asks recipients merely to "Celebrate Toronto," Giambrone has all but confirmed that such a celebration will serve as the kick-off to his campaign. 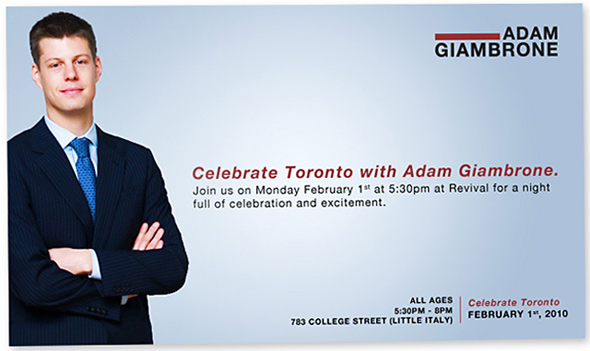 When he officially files his papers (earlier that day), it'll end considerable speculation as to his intentions.

Although critics of the TTC have scoffed at the idea of Giambrone running for mayor, after John Tory revealed he would not enter the race, an Angus Reid-Toronto Star poll put him in second place among the candidates at 17 per cent. He trailed George Smitherman at 44 per cent and was narrowly ahead of former Liberal strategist Rocco Rossi at 15 per cent.

Want to get to know our soon-to-be latest Mayoral candidate a little better? Check out the Toronto Through the Eyes Of interview with him that was posted back in late October.