The Canadians Against Proroguing Parliament (CAPP) protest in Toronto featured an impressive turnout, with police estimating anywhere between 10,000 and 12,000 people in attendance (note: some estimates have the turnout at only 3000). Beginning with a rally at Yonge-Dundas square, the protesters eventually took to the streets shortly after 2 p.m., drawing a loop that took them over to City Hall and then across College St. before returning to their original location.

Started as a Facebook group that has grown to include over 210,000 members, there was nevertheless considerable speculation as to what the actual turnout would be. But, in light of the numbers, the organizers are declaring the event a success.

"Can a Facebook group inspire Canadians to take on their government? You look at the 12,000 people out in Toronto right now and tell me what you think," remarked a satisfied Justin Arjoon, Toronto rally coordinator for CAPP. 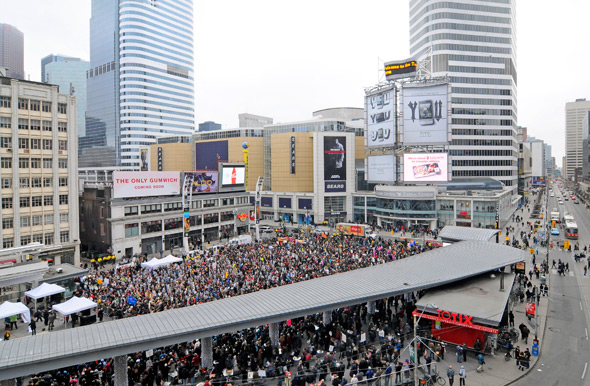 The square started to fill after 12 p.m., and was crammed tight throughout the opening speeches. Despite the fact that the makeshift stage wasn't elevated enough to allow the majority of protesters an unobstructed view of the proceedings, the engagement level appeared high.

"Save our nation - stop prorogation," the crowd repeatedly chanted in unison. 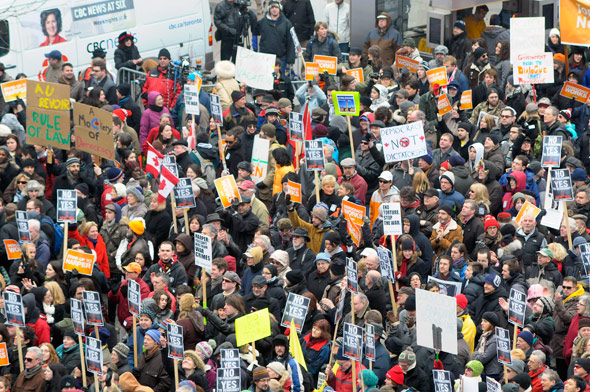 Not surprisingly, among the standard issue signs, there were also a number of creative ones to be found. 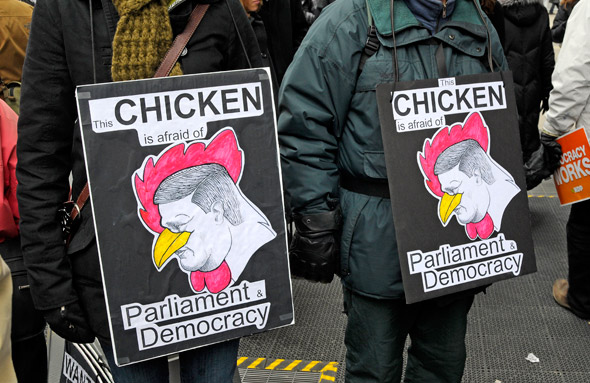 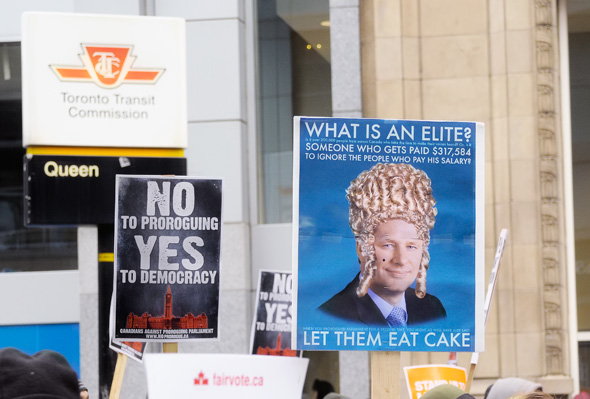 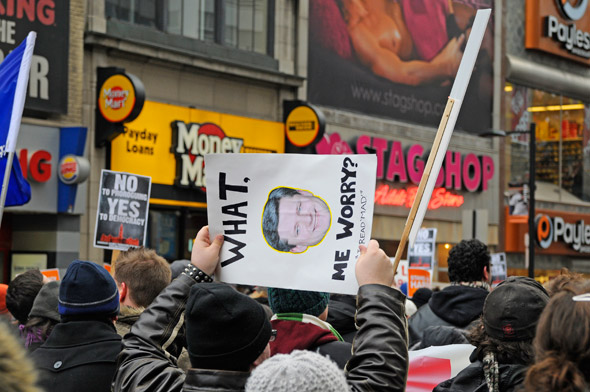 Despite the obvious animosity directed toward Stephen Harper and his government's decision to prorogue parliament for the second time in as many years, this was anything but violent protest. The crowd was well behaved and proceeded in an orderly fashion throughout the march. In fact the most violence I witnessed was the hundreds of photographers jockeying for position over the course of the afternoon. 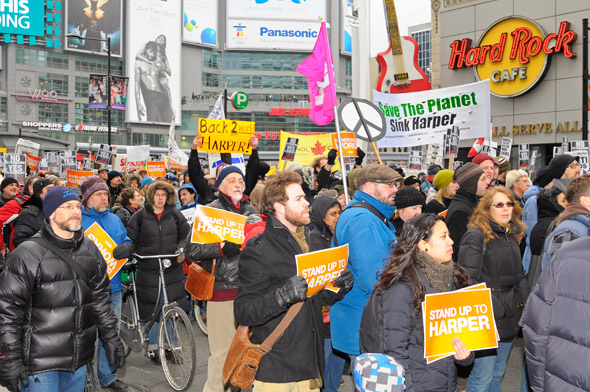 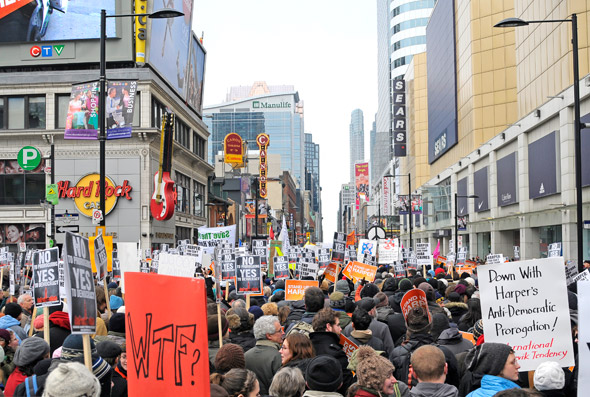 That's not, however, to imply that it was boring or completely tame. A bagpipe-led "funeral march" for parliament received considerable attention and provided a pretty good indication of the general attitude. There was a lot of humour bandied about, but it was obvious that it came from a place of exasperation. 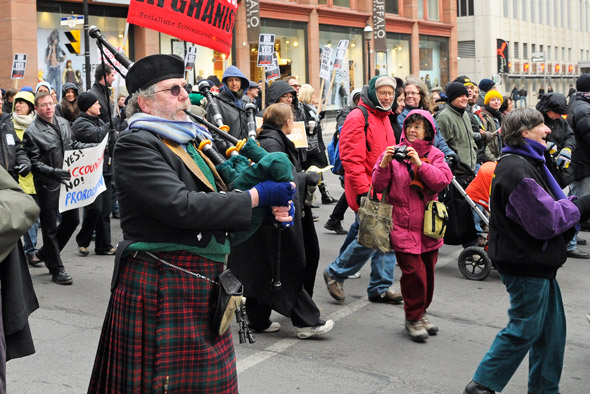 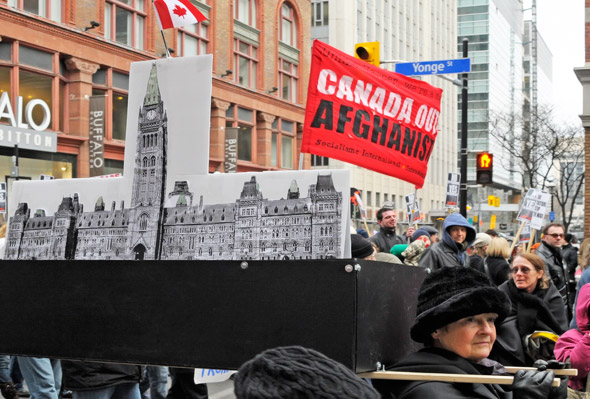 At the front of the slow-moving march was a mixed-crowd of supporters carrying signs that could be flipped to read either "yes democracy!" or "no prorogation." 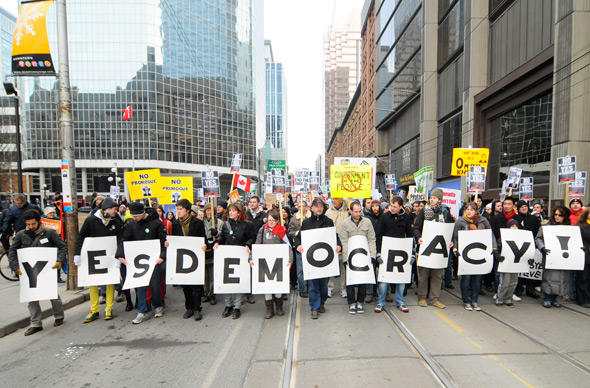 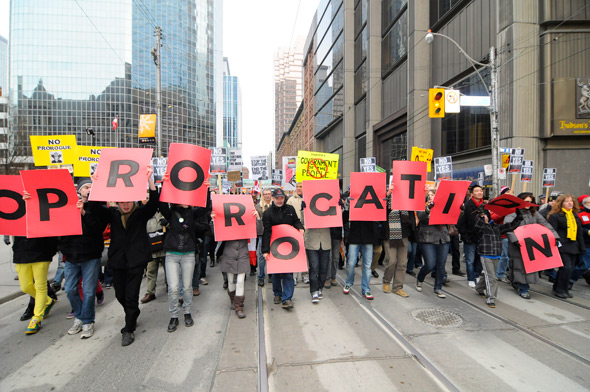 If anecdotal evidence can be trusted, there was a wide demographic represented today, and that's significant considering the group's online origins. In the days to come, there will likely be numerous debates on the significance of the protest, but the true test will come when the next federal election is called. CAPP participants can only hope their actions will have staying power in the minds of Canadians. 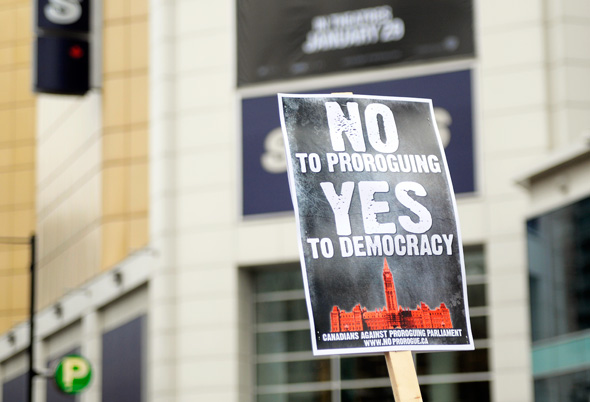 Below is a Flickr slideshow with additional photos and video of the protest. If you'd like yours included, simply add it to the blogTO Flickr pool with the tag "proroguing" and it'll appear in the collection.

Video of the demonstrations in Toronto and Ottawa.