Is the York BRT a Waste of Money?

As construction nears the scheduled November completion of a new Bus Rapid Transit (BRT) line to York University, reaction on campus is mixed. Although students who take the TTC's heavily traveled 196 express route to school look forward to the reduction of their commute time, eyebrows are being raised over the timing of the project and the plans for a subway line to the school.

As Aurelie Mulolo, a student at Seneca College's York campus, puts it, "I think it would be better to spend that money once and for all on the subway to campus. I'm sure we can handle our current routine for a while longer."

But with the subway not set to reach the university until 2015, the TTC felt action needed to be taken in the meantime. As Scott Haskill, a senior planner for the TTC, explains, "ridership has been steadily increasing on the 196 for the last three years... The point of the BRT is to make immediate improvements."

According to the TTC, the BRT will reduce the current trip from Downsview station to campus by around 7 minutes. 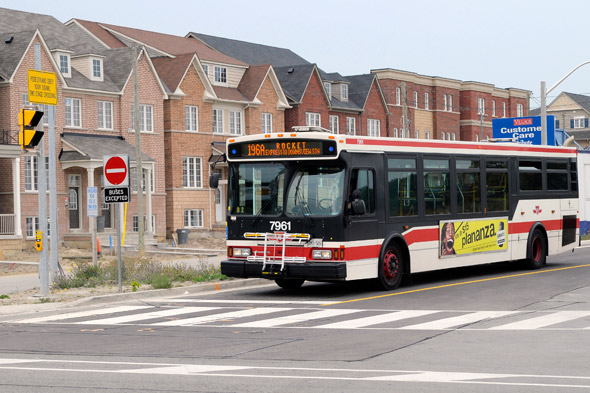 The key time-saving component of the project will be the use of the hydro corridor between Dufferin and Keele streets north of Finch Ave. to insulate buses from traffic on the westward potion of the route.

But at a cost of approximately 40 million dollars, there are questions as to whether such a modest reduction in travel-time is the best use of TTC resources. Dr. Sheetal Lodhia, who like Mulolo commutes to Seneca's York campus, wonders if 'it's worth 40 million to save seven minutes... I'd rather see [that money] get funnelled into more buses and drivers, rather than road construction, which seems like a band-aid solution."

Another concern relates to the fate of the BRT when the subway finally does reach York. While Haskill confirms that the 196 will be removed from service at such a time, he notes that plans are in place to use portions of the BRT for other existing land routes.

Mulolo, however, remains unconvinced. "I don't see the point in using such a vast sum of money on something that's not really going to be there to stay."


View York U BRT in a larger map