When I read at the end of June that the Toronto architectural firm, RVTR Architects, had won the Canada Council's Professional Prix de Rome award, I immediately went online to see what they'd built. I found the firm's spare, clean website, and frequent references to its groundbreaking work on sustainable housing models, but no hints of any buildings that I could visit. Then I looked at the website again, where the firm forthrightly describes itself as a practitioner of "Research Based Design Architecture Urbanism."

To be sure, it's not as if the four partners at RVTR lack experience. Over the phone Geoffrey Thun - the 'T' in the firm's name - quickly recaps their resume, with the qualification that this is their past. As part of Baird Sampson Neuart Architects, Thun was project architect on the

Thomas L. Wells public school in Scarborough and the French River Visitor's Centre, and had a hand in the design of the Luminous Veil suicide prevention barrier on the Bloor St. Viaduct.
Kathy Velikov worked on the Pond Road student residence at York University, while the firm's two 'Rs' - Colin Ripley and Paul Raff - were respectively involved in Erindale Hall at U of T's Mississauga campus and Cascade House, a Forest Hill residence that's notable for its striking modernity and (in the neighbourhood's context) understatement. There is, to be sure, nothing backward-looking in any of their built work.

What RVTR has produced is mostly on paper, and ranges from modular, blocky homes with a clear debt to Mies and Corbusier's notions of modernism, to wildly imaginative public spaces that curve and arc improbably, and visions of the future that range from the intriguing (multi-level transportation networks) to wild-eyed (floating buildings straight out of some cautiously dystopic sci-fi.)

Thun explains that the firm's mission is focused on sustainable architecture, specifically designed for the challenges of a four-season climate like Canada's, with its peculiar and often brutal conditions. The cash prize that comes with the Prix de Rome - $50,000; not a particularly hefty sum - will be spent largely on research trips to places like Japan, where a prefabricated housing industry is thriving, one that Thun and RVTR would love to try and replicate here.

"At the moment, one of the most significant issues we're looking at in our research and design work, in terms of affordability, is the mandate to develop a mass-produced, customized home industry," Thun tells me. There are small firms making expensive, bespoke prefab homes and cottages, and then there's the massive, multimillion dollar trailer home industry, which is based on pumping out dwellings that barely vary whether they're plunked down and wired up anywhere from Florida to Timmins.

"While the trailer is constituitive of an extremely large percentage of the existing residential market in North America per annum, one of the greatest deterrents to embracing pre-fabrication as a construction methodology is the perception by a broad public, that the trailer home is representative of the prefab home," Thun says, choosing his words carefully as he knows he's treading on sticky ground. "So for cultural reasons, it's not desirable to as many - I'm tiptoeing around this, frankly, with respect to socioeconomic associations with prefabricated housing." What he means, of course, is that there's a whole class of home-buyers - and municipal boards and city governments - for whom the mere mention of the term "prefab home" evokes single- and double-wides parked in open fields, next to cars on blocks and rusty barbecues.

As any Toronto homeowner will tell you, the weather is your enemy, as it turns your roof to pulp, corrodes your brickwork and tries to turn your basement into a musty swamp, all while you try to fight off its extremes with expensive heating and air conditioning. With projects and prototypes like North House and Latitude, Thun and RVTR are trying to solve at least a few of these problems, and create solid, efficient, attractive and affordable homes on what would potentially be a mass scale, if their studies in prefabrication bear fruit.

"What's most fascinating about Japan which makes them singular in terms of national industries is the fact that they've developed, in the past 15 years, a mass-customized prefab industry," Thun says. "The fundamental concept there is deploying post-Fordist assembly line techniques to generate housing and its components, which is something that's entirely absent from the North American market at this moment." 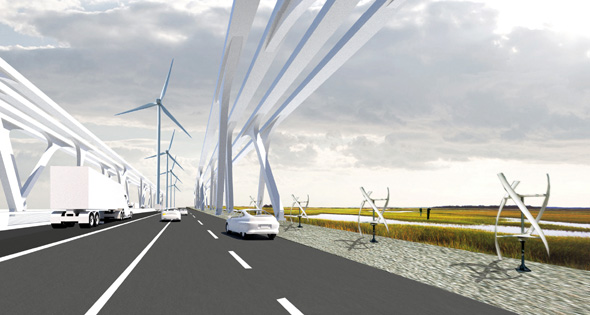 It's easy to be skeptical about what RVTR are doing, but the challenges they're trying to answer are pressing, and there's little in the shape of answers coming from suburban developers with their brick-skinned balloon homes. Thun says that straddling academia and the housing industry - building partnerships with firms like Miele, Tembek, Bulthaup and Lutron, thanks to introductions brokered by the Canada Mortgage and Housing Corporation - has been one of the most rewarding and hopeful aspects of their experience. It's these relationships that the firm will be relying on when they take their prototype North House to the Solar Decathlon in Washington, D.C. next year.

And it's worth remembering that a star architect like Frank Gehry once inhabited a world as theoretical and jargon-filled ("post-Fordist") as RVTR's for much of his career, and that after over two decades in practice he had little to show except a handful of houses, including his own. As for putting the firm's name to something with a street address, Thun says they're more than ready - RVTR is a "licensed and professional firm capable of providing full services. If someone approached us tomorrow to design a fantastic new high performance sustainable building in Toronto, we'd be happy to take the work on."