Toronto at 4am: TTC's Greenwood Yard, Zanzibar and Other Nighttime Sights

Once a month I throw my circadian rhythm for a loop and explore the city from around 2AM to sunrise. Sometimes I have a plan, sometimes I don't. All-nighters don't get much better than this.

What's still awake in Toronto at say, 4 in the morning, besides the obvious remnants from the club district and bars? Admittedly, there were many exhausted and slightly frustrated points during my quest to find out when I was tempted to throw up my arms and exclaim, "Nothing!" However, one of my friends pointed out that the aim of this little adventure wasn't to hunt down whatever obscure bursts of daytime energy Toronto might have to offer at the sleepiest hours of night, because let's face it, they weren't going to be easy to find. Toronto just isn't one of those cities.

It was to be, then, an exercise in noticing what was different about the night, and see the effects on familiar sights in the simple absence of daylight and people. And what an interesting experience it was.

Where there was an absence of light, there was an increase in exposure time. The night had a way of painting colours and shadows onto things if you gave it long enough. The graffiti monsters on Gould seemed to come alive from behind the 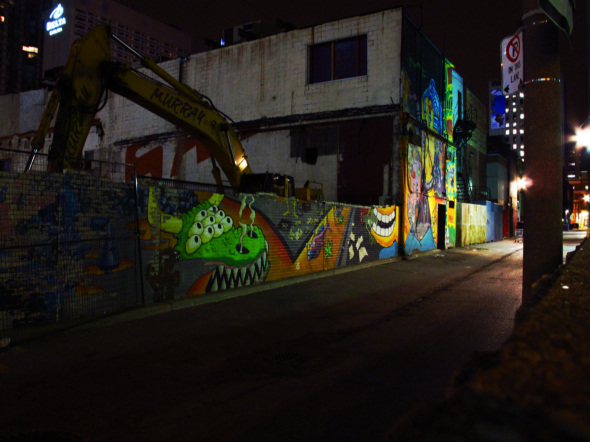 remnants of Sam the Record Man...

...and the Ryerson Quad looked almost enchanted, bathed in a soft orange glow. 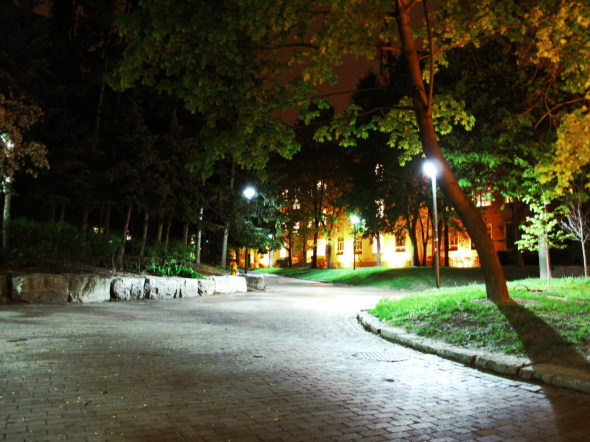 Before setting out on our little adventure, we'd done a bit of brainstorming, so we'd have at least some method to our madness. First, we asked ourselves this: What kind of people are out late, or up extremely early? Thoughts immediately turned to transit operators, inebriated clubbers returning home from a night of partying, and coffee shop owners. We thought it would be most worthwhile to check out the first in that list. So we headed out to TTC's Greenwood Yard via the 320 Yonge and 300 Bloor-Danforth night buses, homemade gingerbread cookies in tow. 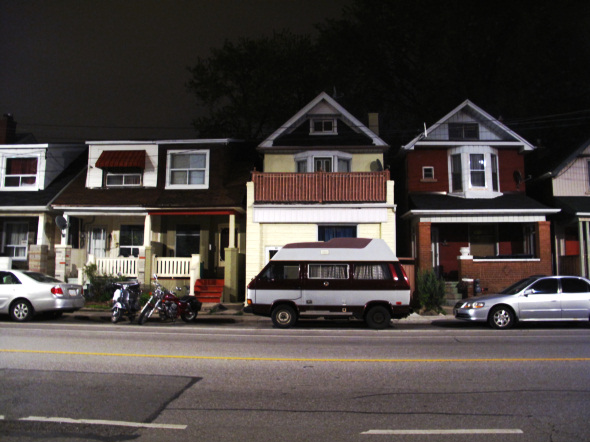 Walking south on Greenwood, we couldn't help but notice how eerie our surroundings were. The peaceful uniformity of the houses and trailers along the street didn't seem to match the darkness and unpredictability of the night surrounding them. Maybe we were thinking a little too much, but it was spooky, all the same. 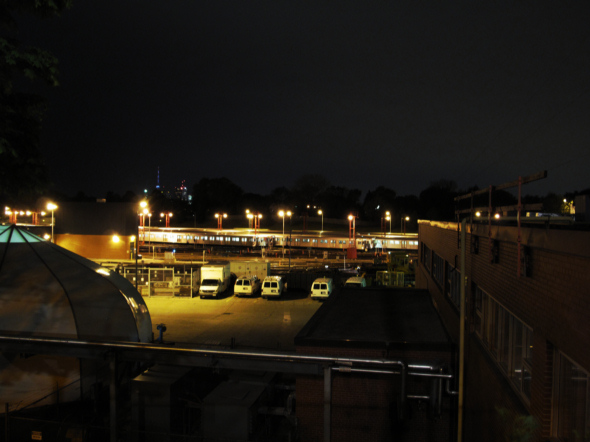 We made it in time to the yard to watch the first trains rolling in to sleep. 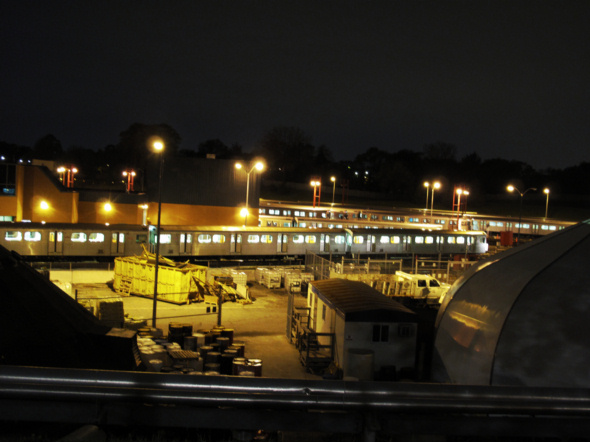 Making our way further south towards the entrance, we realized just how huge this yard was, and began to rethink our plan. Our goal had been to hand out cookies to train operators going off shift (or really, to whoever would take them). In our imaginings of sleepy conductors ambling out after their shift, pleasantly surprised and eager to chat with a couple of harmless transit geeks with baked treats, we'd forgotten that people drove cars to work. And that they'd be driving those same cars back out through the gates, windows rolled up, making them quite difficult to flag down to chat with and offer cookies.

One particularly cool train operator rolled out windows down, rap music blaring, and he even turned his music off when we approached him. He too however simply smiled and said, "No thanks, man," to our cookies. Oh well. More for us.

Soon, we had late night munchies that not even sugary cookies could sate. Craving real food, we hopped on the night bus back to Yonge. The ride was a lot quieter on the way back--people definitely weren't heading into town at this hour, only back home. The night bus driver also refused our cookies, but he seemed pleased that we'd made the offer.

After filling up at 7 West for our 4AM meals, we wandered south on Yonge towards Dundas once more. 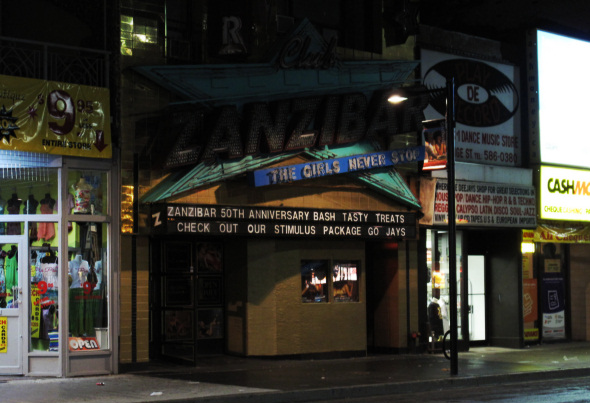 Do the girls never stop at the iconic Zanzibar? Well, at 5AM, they do. 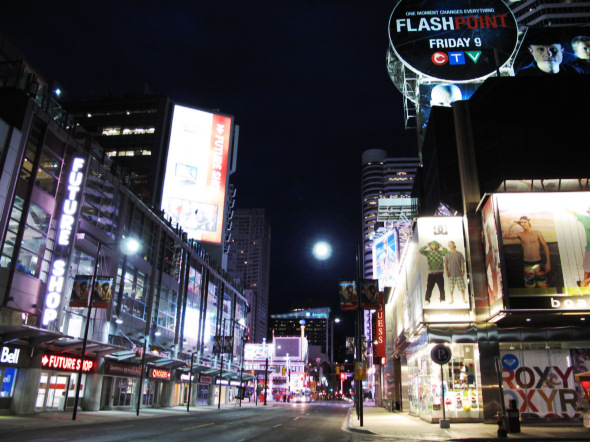 I had mixed feelings approaching Yonge and Dundas Square. The absence of people was as unnerving as it was peaceful. Logic aside, you just don't expect the lights and billboards in the area to still be illuminated at full force without the people there, too. It's a balance thing--somehow it seems impossible to have Yonge and Dundas Square without both, all the time.

But there it was. All of those lights on, and nobody in the world to see them but me and my partners in crime. 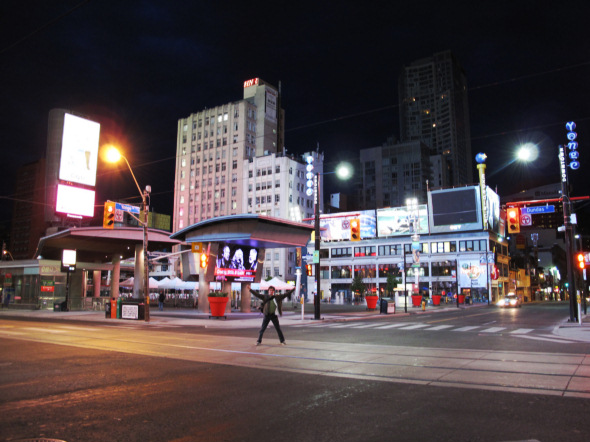 A scramble crosswalk utterly devoid of scrambling? Also quite a sight to behold. Dutifully, the automated male voice would still announce, "Walk light is on for all crossings!" to nobody in particular. 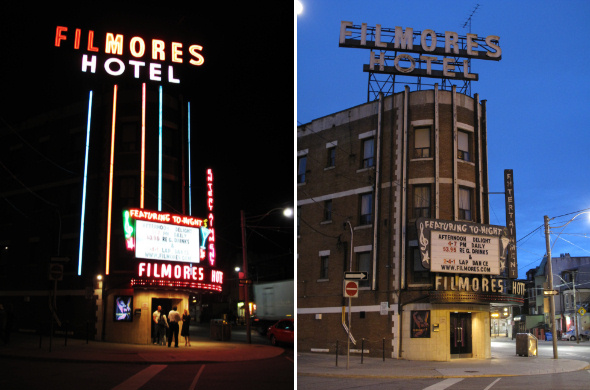 As we passed Filmores Hotel at 6AM, we took another picture and compared it to the one we'd taken at 2AM. How different it looked closer to dawn.

It was 6:30AM when we finally turned in, and just in time, as the murky morning clouds began to sizzle with lightning and the showerhead in the sky turned on full force. I'd hoped to catch sunrise from my friend's rooftop patio, but no such luck.

No matter. There was always next time...