Starting at 7am on Friday morning, members of the Habitat Campus Coalition, a group of Toronto-area university and college students working with Habitat for Humanity, began 'living' in small outdoor wooden cabins underneath the ROM's Crystal for 24 hours. Their mission: raising awareness of overcrowding and sub-standard housing.

Since the crux of the second annual Home-A-Thon, the Habitat Campus Coalition's largest event of the year, was that it would last all night, I decided to wait until 10:30 pm (fifteen and a half hours into the event) before visiting the site. The temperature was mercifully mild even at that late hour, and I was impressed by the stamina of the participants, many of whom were dancing (ostensibly to keep warm, though the weather suggested it was mostly for fun) as a DJ played Kanye West and Cyndi Lauper.

I was given a tour of the cabins by Marissa Gladstone, one of the event's organizers. She told me there were thirty-five students participating (from UofT, York, Ryerson, Humber College, and other schools), which was about what they'd expected. (Press materials indicated a slightly larger estimate of fifty participants.)

The cabins' dimensions were a claustrophobia-inducing 8' x 8' x 8', each cube tasked with housing eight people: 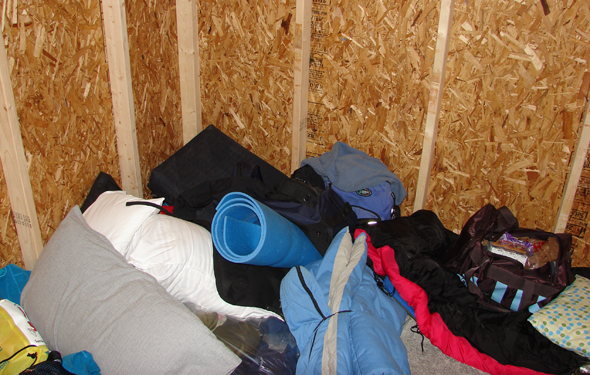 The composition of the photo is admittedly awkward, but you can imagine how little room there was to work with. I'd be hesitant to spend a night alone in one of these cabins, much less with seven others. My heartfelt admiration and condolences go out to the participants (although doing this for one night with friends is a drop in the bucket compared to having to actually have living quarters like this).

Because of the prime location, the loud music, and the spectacle of dozens of university students' gyrating bodies, the event attracted a fair number of passers-by, who responded with sympathy to its purpose. 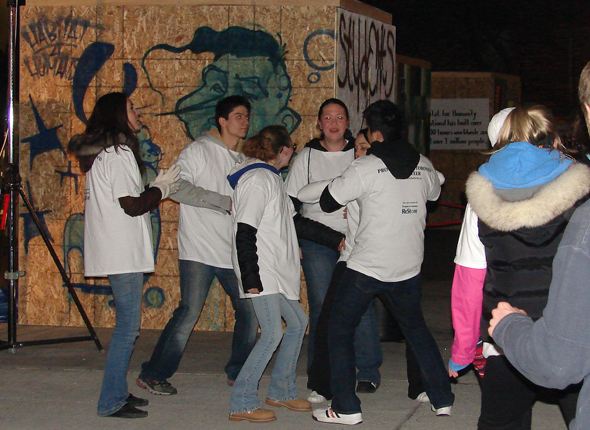 Among the participants, there was some self-congratulatory "we sleep on the streets so others don't have to" sentiment, but people generally seemed to have an acute appreciation for what the event could and could not accomplish. I'm of the mind that staging events like this will not solve the greater problem. It can only seek to raise awareness, which is a necessary and admirable goal in its own right. To that end, the Habitat Campus Coalition's Home-A-Thon was a resounding success.