On Saturday, a bunch of us got together to flavour trip on fresh lemons, limes, oranges, grapefruit, pineapple, cherry tomatoes, and brussel sprouts. Then a crazy friend of mine gave me the most insane birthday cake ever. All of the above fruits & veggies and meat sins were purchased exclusively at the Loblaws at Dupont & Christie. I know... anyone who is silly enough (i.e self-disrespecting enough) to eat a cake made out of bacon and ground beef is asking for trouble. We joked to that effect. We ate. We enjoyed. All sixteen of us gluttons.

This evening a concerned reader named Scott gave us word that the very same Loblaws was abruptly shut down by Toronto Public Health (TPH) today. This is a grocery store that has passed 10 consecutive Dinesafe inspections. I decided to get in the car with my crazy friend and go check it out.

We and others were greeted by locked doors and an official TPH "closed" sign on the door, but nothing more. Nothing to indicate the reason for the closure, and nothing to ease my mind. That seems kind of unfair, and somewhat irresponsible. 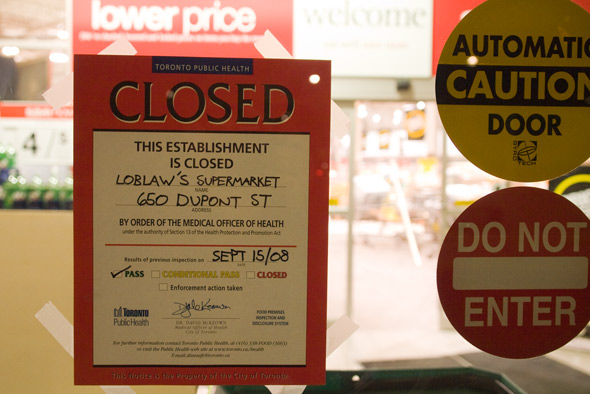 "This establishment is closed by order of the Medical Officer of Health" reads the sign greeting surprised customers, who observe a flurry of activity beyond the glass. Workers are busy cleaning surfaces, mopping, and tossing food products into large, clear plastic bags (mostly fresh foods like baked goods). Everyone wants to know what's going on, but there's no indication. I want to know if my fifteen guests ate something bad or just something gross. Either way, it's disconcerting.

I motioned to a group of employees beyond the glass, appearing to be all winterized and prepared to go home. One employee pointed at the sign but none were willing to come out to speak or attempt to explain things any further. People continued to stop at the doors, many trying to understand why it was closed. Strangers talked about what it might be. An elderly man seemed to be certain it's roaches. No one knows.

We stick around for a couple of minutes, watching workers inside cleaning. 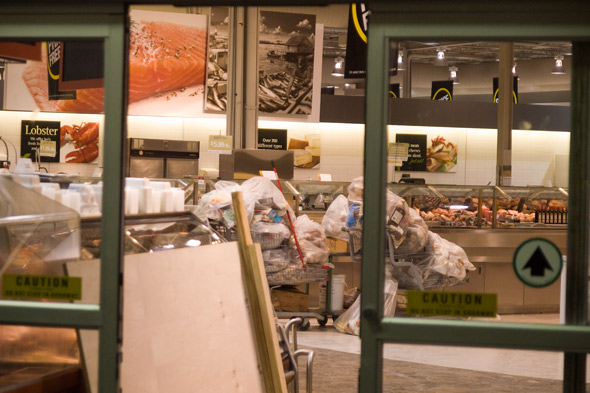 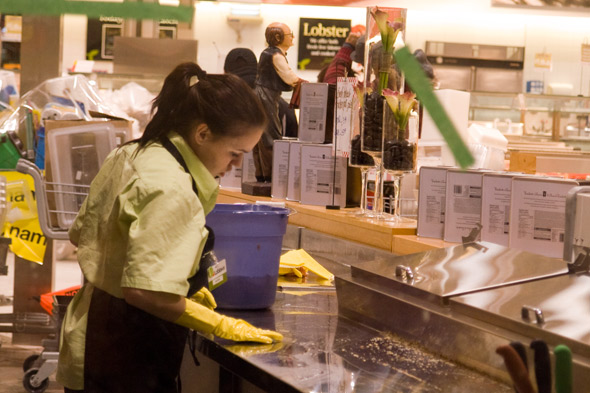 Searching Twitter finds paiige, who seems to support the theory that it was bugs of some sort, after seeing fumigation crews on the scene: "Loblaws at dupont and christie is, according to doorgirl "closed...i can't tell you why." um, the 4 Orkin trucks in parking lot say it all"

Should we be forced to speculate? Does the fact that there is no explanation from TPH mean that there's no threat of illness? Should Twitter REALLY be my best source of public health information right now?

UPDATE: January 27th, 2009, 10:05am.
I just spoke with store manager Lucia Mann. She was court, and brushed me off, telling me that she's "unable to say anything at this time" regarding the store closure. She told me to go to "prloblaws.ca" for information on the closure, but that domain/URL does not exist. Searching the Loblaw site for press releases yielded a press release page and a customer announcements page, neither of which contains mention of the Dupont and Christie store closure. The Loblaws site (note that there are a Loblaw AND Loblaws site) also has no information.

I called Loblaw's head office in Brampton and left a voicemail with their public relations department at 10:15am. Awaiting official explanation...

UPDATE: 11:19am:
Dinesafe has updated their page and the many infractions are now posted for public viewing. Included are crucial failures: to control rodents, to maintain proper refrigeration temperatures, and to prevent food contamination. They've also been hit with a bylaw infraction for failing to "produce valid food handler's certificate."