The Night the Lights Went Out

It's hard to imagine that five years ago the city was swallowed by darkness when the blackout crippled Toronto. It stopped traffic lights, stalled elevators and thousands of people frantically tried to find a way to get home -- no one saw it coming.

Where were you when the blackout hit?

The effects were immediate and stunning. But in the midst of the darkness and the chaos, we stumbled upon the neighbours we never talked to, the stars that you could never see at night and the feeling of being away from the energy-sucking conveniences that had become staples of modern life.

In celebration of the blackout, the people of Kensington Market helped others re-live the magic by hosting their 5th Anniversary Blackout Party, a series festivities meant to take back the night. 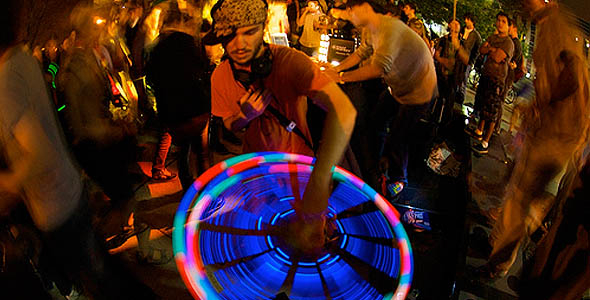 The celebrations began as the sun slept soundly beneath the horizon. And when the moon and stars came out to play, so did we. I rode through a sea of bikes in vibrant vintage colours and others with spunk and local flavour equipped with charming bells and whistles.

The experience was breathtaking. Surprisingly, Toronto police were extremely courteous in helping to guide the party through the city streets. In our auto-addicted culture, it was a nice change of pace to see the streets flooded with bikes. 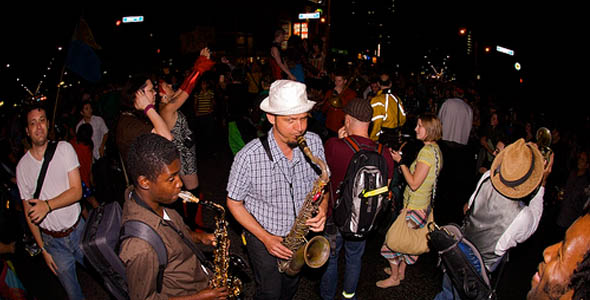 Likewise, people came prepared with party streamers, glow sticks, boom boxes and crazy costumes, while performers on stilts and batons of fire stole the show. It was a musical paradise as the sounds of our cabaret danced through the night with a rousing cheer of "the streets are for people."

The 2003 blackout has become symbolic of how we take electricity for granted. And while some of us vowed to change our lifestyles by unplugging more often, have we actually followed through?

While there are many stories of inconvenience and frustration from the day, there are even more of friendships struck, helpful strangers and challenges overcome. It was this kindness and compassion we found in the dark that exemplifies Toronto the Good.

Photos by foxy_moron and Garry Choo