Circa Tries To Reinvents Itself -- Again

Circa has done it again. In effort to reinvent itself, the mega-club unveiled its newest redesign last Friday, in attempt to keep relevant in an increasingly competitive club district, as previously reported here just three months ago.

It's Friday night and you want to grab a few friends and head to clubland. One of the more popular options for club kids these days is A.D/D.'s Randomland parties at Circa (126 John St.).

If you're savvy enough to join Newsoundspace's reduced admission guest list you end up waiting 15 minutes in line, albeit indoors, while those willing to pay full price ($15) get to walk right up to the cashiers and into the club. Guest list does not always mean V.I.P. treatment.

While waiting in line in the stanchioned-off entranceway, I keep myself entertained by staring up at the circular mirrors on the ceiling, refracting psychedelic colours and shapes. I could tell I'm in for a real club experience. Although I start off feeling like herded cattle, the feeling soon melts away like the ice cubes in my first mixed drink. 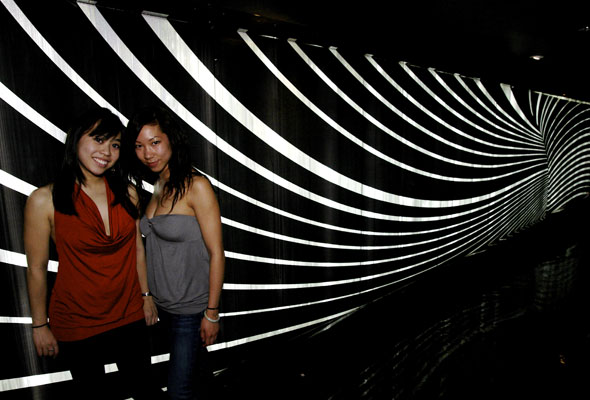 Once inside, I find myself meandering along the labyrinth of hallways leading to the main dance floors, of which there are several. 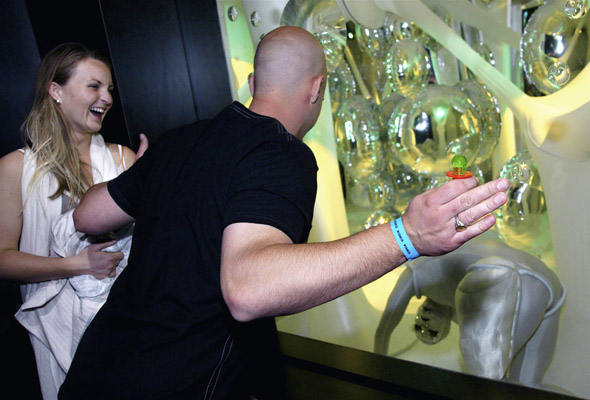 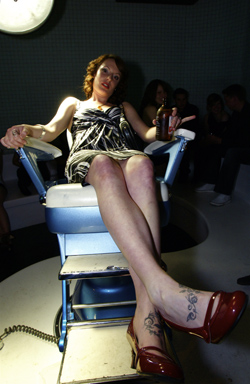 It's equally entertaining to watch other club-goers engaged and interacting with the contortionists in the life-sized showcases. The performers look like they're straight out of a Bjork music video.

While the SKYY Cinema Lounge has a lively crowd, it's a lot more fun hanging out in the smaller areas of the club.

The Bathroom Bar, with its stage lighting and vintage dentist chair, makes for some playful diversion from the dance floor antics.

It's a pity that the foot lever for the chair is left unplugged. Maybe this has more to do with potential insurance issues. Mixing drinks and hydraulic equipment is seldom a good idea.

In one area on the second floor I am entranced by a display case that features a robot trapped in a cryogenic capsule. Or maybe he's just charging up on some UV rays.

All in all, an improvement from the last redesign, but I still feel like the club hasn't fully tapped into its potential. I'd love to have a less sterile environment with more interactive elements.

Kenny Baird is the art director behind this latest nifty redesign. His credits include design and installations for The Standard Hotel in Hollywood, as well as Area Nightclub and the U.S.A. Maritime nighclub in New York City.

Perhaps more memorable is Baird's work as a costume and set designer for the hit TV show Peewee's Playhouse. Now it all makes sense.

More photos in this mini slideshow below:

If you want to see the place for yourself, check out Sunday night's super party Canadian Showcase with John Aquaviva, as well as Danny Tenaglia, Matt C, Kenny Glasgow and more. Pre-sale tickets are $35 until 6 p.m. tonight.