Photo Story: An afternoon with Bill and his Pups

"People are usually really good with the dogs, the only thing I'm scared about is someone stepping on them." - Bill

I first met Bill on a busy subway car shortly before rush-hour. He was hard to ignore, his four entertaining pomeranians were freely roaming the car, mingling with the passengers, darting under seats, encouraging a scratch or a pat from strangers.

Bill also had a stroller with him. Inside the stroller were 6 puppies. He was pulling them out one at a time to brush them, groom them, wipe their eyes. In total, Bill had 10 dogs on that car, none with a leash. He was on his way to a quiet park somewhere in the city, preferably near water, for the puppies to get out and play.

I e-mailed Bill a week later in hopes of following him around for a while with my camera. Below is a chronological slideshow of my two hours with Bill and his dogs earlier this week.

My afternoon with Bill began at 2 PM near his place on Spadina Road just North of Bloor. Three elevators, a subway, 2 escalators and a bus ride later, we found Bill's favorite quiet part of the city and descended into the Coxwell Ravine Park. Away from all the cars and people, the puppies were let out of the stroller and ran around free.

Considering the size of his dogs, I was forever surprised we don't lose one along the way. I had to constantly watch where I stepped so I don't do the unthinkable. People's reaction on the public transit was generally good. One woman picked up two of the dogs and held them in her lap for at least four stops. Some of the students joked about punting one down the subway car. I'm surprised at home many people just ignore the dogs.

The bus ride was easier then a I thought and before you know it, we were at the park. All the dogs were let out of the stroller and the full dog party began. I hang out with the pups for about an hour, Bill told me later he spent over three hours at the park. He puts a lot of energy into those dogs.

Most afternoons out with the dogs Bill takes photos. A lot of photos. He has a website with over 250,000 photos of his dogs. Sure enough, in the couple of hours I was with him he took over 7,000 photos, thanks mainly to the 8 frames per second of his D2Hs.

The photos in the slideshow are in chronological order of the journey to and at park.

In case you're wondering, Bill raises the puppies and sells them as house-trained and socialized adults.

The wide-angle lens (Nikon 10.5mm 2.8) I use in some of those photos belongs to Bill. He let me use it for the subway and bus.

Bill has a lot of interesting stories about his battle with the humane society, photography, reactions to his puppies, the best parks in the city... I planning to go out with him again and record some audio. Perhaps more to come... 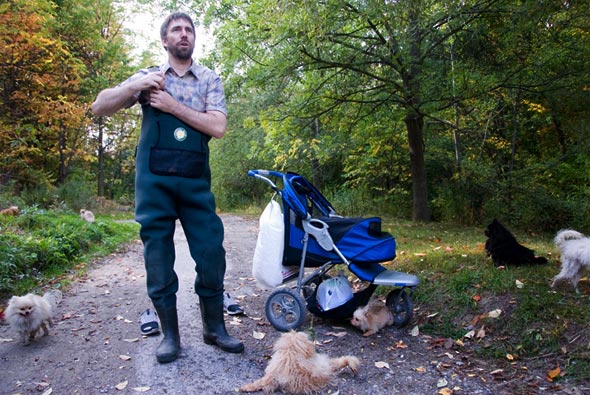 Bill dons a pair of fishing waders in order to sit in the river to take photos of the dogs.