Souvlaki on a pita and roasted quail being sold from local restaurants. Cellular phones and money transfers being plugged from corporate tents. Welcome to the 14th annual Taste of the Danforth Festival! Yesterday I braved the intense heat and the massive crowds in order to pig out on food and enjoy one of Toronto's most interesting festivals.

Taste of the Danforth seemed to become more and more corporate the more west you went. The eastern-most part of the festival was great, filled with local vendors and delicious food. I couldn't resist the lemonade, funnel cake, and corn on the cob (sure, none of that is Greek food, but it was delicious nonetheless.) As I walked west I started to be overwhelmed by both crowds of people and corporate sponsorship.

Steelback beer along with the Pickle Barrel managed to block up a significant portion of the street with their beer garden and restaurant. The Jays, Leafs, Argos, Raptors, and Toronto FC continued to hog the road with children's batting cages, jumping castles, and basketball nets. Those events, combined with a giant rock climbing wall and face painting booths seemed like fun for the kids.

Then came the Western Union tent. Apparently a lot of people walking through GreekTown on the weekend need to send quick, secure money transfers worldwide. A lot of people must have allergies too, because Reactine was also prominently displayed on the street. Of course, no Toronto event would be complete without Rogers Wireless making sure that every person in this city is constantly buying one of their new cell phones. 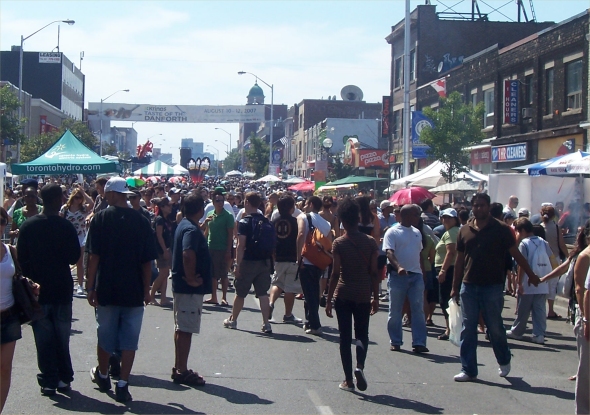 Despite being stopped several times by corporate representatives, the day was still enjoyable. The food was good, the prices were fair, and the weather was amazing. The street was packed with people eating, laughing, and watching stage shows. The chicken on a pita was fabulous, despite being from a Brazilian restaurant, not a Greek one. In fact, I didn't have any Greek food the entire time. It seems like this festival is moving away from primarily Greek food to become a true multicultural festival, one that is very representative of Toronto.

Taste of the Danforth continues today (Sunday) until 8pm along Danforth Avenue.