A Tale of Stifled Sails and Sunken Ships

In 2000, I was living the good life in Australia, enjoying a routine which brought me into the water, almost daily, either to surf, sail or scuba dive. Getting into the water was fabulous but getting to the bottom was even better. This growing desire to see what lay beneath the surface pulled me into a small Brisbane bookshop one day. On display was an issue of National Geographic with a shipwreck on the cover, a female figurehead carved into the wooden bow of a ship within its yellow border. A whole new world was opening up to me and this was just the beginning. I hoped one day to see the ship up-close and wondered where in the world it was.

I was astonished to learn the ship lay close to home, in the dark green depths of Lake Ontario. Flipping through the glossy pages, photos and scans revealed amazing detail of TWO battleships, the Hamilton and the Scourge, upright on the lake bed, mostly intact and still waiting for action. Just after midnight on August 8, 1813 these two American naval ships, both which boasted successful assaults on York, now lost their final battle.

Earlier in the day they had prepared to combat the Brits but with no wind and stifled sails neither side could engage the other. The stalemate continued into the night with crew sleeping beside pointed cannons, hoping the next day would bring victory in a war that had lasted for months.

The weather did began to change, quite drastically however. Large drops began to fall, and crew members awoke to a freak squall lashing lightning over the lake. Wind whipped the ships, tossing the top-heavy schooners over. Water poured through open gun ports leaving little time to react. Sadly the ships slipped away, quickly out of reach of the crew, marking the largest loss of life on the lake during the war. 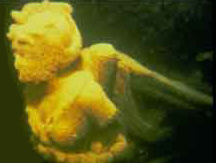 Sitting at a depth of 300 feet they're too far down for most divers to explore. Though Jacques Cousteau visited the site in 1980, surveys are few and far between, so even if I'm lucky I won't be getting down there any time soon. This past weekend though I set my course, trying to get as close as possible to the wrecks. With a consistent wind at my back I set sail for Port Dalhousie, just on the other side of Lake Ontario and about 25 nautical miles from Toronto's shore. I'd hoped to see if any other sailors knew the tragic tale and could divulge any long lost secrets. All I'd discovered however is that much of our lake's history has been forgotten and too few people know what lies beneath Lake Ontario's seemingly cold grasp.