The UnderTOw: The High Park Woodspirits

Sometimes in children's fairy tales you hear the phrase, "The woods have eyes." I've often considered those words foreboding, a warning that something somewhere is keeping a very close eye on you. Now I have a completely different association with the phrase, after a discovery in High Park showed me that the eyes of the woods need not be pernicious, and can even even be a source of comfort.

High Park used to be a place I only visited in transitional seasons: the leaves changing in the fall and the colour-burst of blossoming trees in the spring were reason enough. The more time I spend there, though, the more I realize it hides as many secrets as any old building or hidden alley. Clustered around the south east end of Grenadier Pond and heading up the path through the Cherry Blossom garden are several faces carved into the bark of the trees. The work of Tree Spirit Carver Colin Partridge, these old men keep a watchful eye on the goings-on of the park, imbuing it with a sense of mystery and wisdom.

After I learned who the artist behind these faces was, I got in touch with him to ask him about his work. Now a retired RCMP officer, Mr. Patridge first came across woodspirits when stationed in Germany as a member of the Canadian Armed Forces. He has spent the last seven years honing his craft, which is both a way to make productive use of a dead tree and liven a space up. Driven by an "uncontrollabe urge to create things," Mr. Partridge has fashioned a great deal of these woodspirits, and no two are the same.

Commissioned by the city, the woodspirits in High Park took fifty hours to complete in 2006. Mr. Partridge uses a special chainsaw, hammer, and chisel to carve out the form of the face, and then stains it with Sikkens to give it some longevity. Although either vandals or animals have removed one of the eyes of one, the spirits still have a strong presence in the park, especially on the path up through the Cherry Blossom orchard.

Although he has been commissioned to create many woodspirits in Toronto, Mr. Partridge admits the High Park woodspirits are the only public-space carvings in the city. A resident of Thornton, Ontario, Mr. Partridge's work can be found all over Southern Ontario, with many appearing on private residences and cottages.

When asked if he has a favourite carving, Mr. Partridge hesitated. After a moment, he suggested that one of the carvings in High Park may fit the bill, the one closest to the south east end of Grenadier Pond: 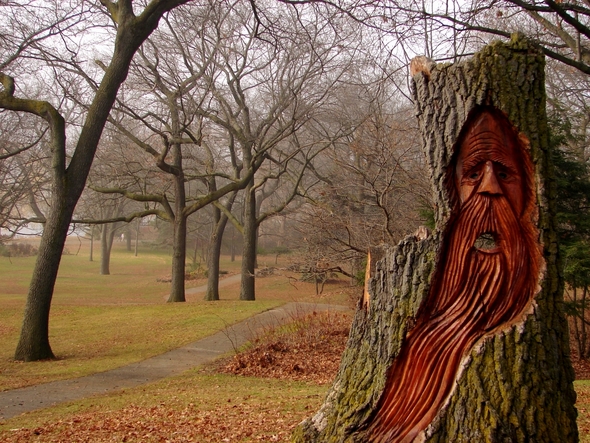 Because the tree is completely hollowed out, it allows children to run into the stump and look out of the mouth of the old man, to see the world through the eyes (or mouth, in this case) of a tree. Re-imagined as spirits of the wood, these trees are given new life, breathing a sense of mystique into this quiet corner of the Toronto's urban forest.

More images of Mr. Partridge's tree carvings can be found on his website. He also sells individual carvings, and can be contacted via email for specific commissions..

All images by me except bottom one, by gardinergirl from the blogTO Flickr pool.