The Undertow: The Hiawatha

If you've ever taken a trip to the islands in the middle of summer, you know how busy the inner harbour gets. It's not just ferries that are buzzing over the lake; there are the private sailing clubs, huge tankers heading to the Portlands, and party boats loading up for booze-cruises. And while they're all important parts of the floating-architecture that mark the experience, there's one boat that stands apart from the rest. If you keep your eyes east and squint a little, you might get a glimpse of the modest ship that's been putt-putting across the inner harbour (and even spending a lonely few nights at the bottom of it) since 1895: the Hiawatha.

The Hiawatha belongs the Royal Canadian Yacht Club, so unless you're a member (or the lucky friend of a member), the closest you're going to get is the view from another boat. Even that is enough to give you a sense of the history behind the ship, though. It was built at the end of the 19th century to accommodate the growing membership of the RCYC, and was named after the central figure in Henry Wadsworth Longfellow's epic poem, the Song of Hiawatha. 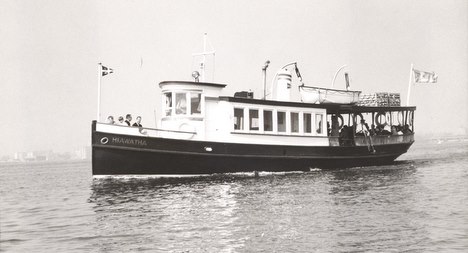 Given that the RCYC has a great respect for its history and traditions, it shouldn't surprise that the Hiawatha has a dress code that makes the some of the places in the club district feel like the Phoenix on a Saturday night. Both men and women are required to look "smart casual;" for the men that means "a shirt with collar and sleeves; and long trousers or dress shorts no more than 3" above the knee" and for women it means a ban on "jeans, cut-offs, micro mini skirts, tank tops or bathing suits."

Back in 2000, a few vandals came along and broke more than just the dress code; they opened the valves on the ship and sank it in the inner harbour. It took a few days to pull it back up, but, after whole pile of money was spent to bring it back into service, the Hiawatha was soon back sailing the lake as it had for a century before. Despite offering a $5 000 dollars reward for tips leading the capture of the vandals, the RCYC still has no idea who perpetrated this strange crime against Toronto's boating history. The sabotage was in vain, though: the boat still proudly sails the lake with her elite cargo on a regular basis.

Top image from boatnerd.com, middle one from the Toronto Marine Historical Society.